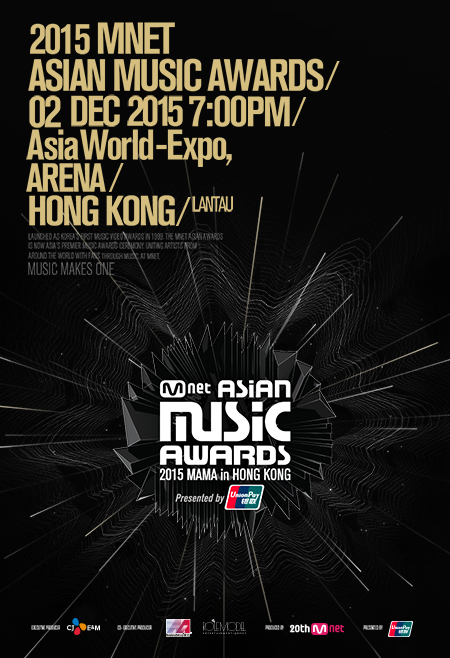 MAMA experience. This year’s star-studded awards ceremony is expected to introduce cutting-edge stage technology under the theme of ‘Techart (a combination of technology and art)’ as shown in the official logo above.

“We are thrilled to announce the fourth coming of 2015 MAMA to the geographical hub of Hong Kong and to celebrate its biggest expansion with pre-week activities,” says Hyung-kwan Shin, Executive Vice President at CJ E&M’s music channel Mnet. Shin adds, “The annual music extravaganza will showcase best performances by Asia’s hottest artists to the fans not only in Hong Kong but also from around the globe, highlighting the incredible power and popularity of Asian music.”

In its seventh year since evolving into Asia’s biggest music awards, MAMA’s impact has spread far beyond its origin in Korea to reach other parts of the world. Acclaimed for its advanced stage production and mega-scale performances, MAMA also has been instrumental in introducing Asian music trends and fabulous stages to global audiences. Last year, renowned artists, such as John Legend, Eason Chan, EXO, G-Dragon, Taeyang and Seo Taiji joined to celebrate 2014 MAMA.

ABOUT MAMA
MAMA is Asia’s biggest music awards acclaimed by fans around the world for its advanced stage production and mega-scale performances. It also has been instrumental in introducing Korea’s high-end production system to global audiences. MAMA’s origins trace back to 1999 and the Mnet KM Music Festival (MKMF), an awards show instrumental at the time in leading the growth of the Korean music industry. In 2009, MKMF was renamed the Mnet Asian Music Awards (MAMA), and in 2010, the festival started its Asian tour in Macau followed by 2012 MAMA in Singapore. MAMA has been held in Hong Kong at the Hong Kong Convention and Exhibition Centre (HKCEC) in 2013 and AsiaWorld-Expo, Arena (AWE) for the last three years. 2015 MAMA will take place this year on December 2 at Hong-Kong AsiaWorld-Expo (AWE).

ABOUT CJ E&M
CJ E&M is Asia’s leading content and media company headquartered in Seoul, Korea. It has four main business units - broadcast, film (CJ Entertainment), music and live entertainment. Since 2011, CJ E&M has been contributing to the promotion of Korean culture around the world, through the companys one source, multi-content strategy. As a trend leader in Asia, CJ E&M has produced and distributed various popular content, some of which include Asia’s largest music festival Mnet Asian Music Awards (MAMA), leading Hallyu convention KCON, Tony Award-winning musical Kinky Boots, record-breaking box office hits Roaring Currents (2014) and Ode to My Father (2014), along with sought-after television series The Incomplete and Grandpas over Flowers. With regional offices in Asia and the U.S., CJ E&M currently employs over 2,000 people worldwide, and is traded on KOSDAQ under the ticker 130960. For more information, please visit: http://en.cjenm.com.