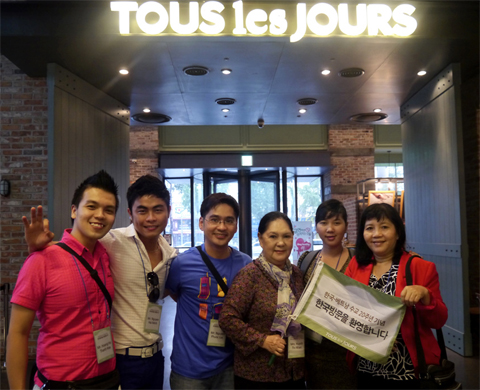 In honor of the 20th anniversary of diplomatic relationship between Korea and Vietnam, Tous les Jours (www.tlj.co.kr), under the auspices of CJ Foodville (headed by Heo Min-hoi), invited the Vietnamese customers to Korea. The company announced that it invited six lottery winners to Korea for Hallyu experience so that they may be allowed to enjoy Korean foods and K-POP performance and visit the company’s headquarters.


The Vietnamese customers, who stayed in Korea for three days from Aug. 29, were of diverse ages from a man in his 20s to a professor in his 40s and restaurant CEO in his 60s. The tourists were all very pleased to have the opportunity to visit Korea through lottery wins.


Nguyen Phuoc Loc, a professor of Chinese Language Department at Ho Chi Minh City University of Education, said, “I normally enjoy breads bought from Tous les Jours and have come to have greater interest in Korea while getting closer to Korean colleagues at the university. I’m very pleased to have a chance to visit Korea. I’m also very impressed with a diversity of breads and kindness that I experienced in Tous les Jour’s headquarters.”


The tourists also visited Gyungbok Palace, the National Folk Museum and Mt. Namsan and other major tourist sites in Seoul. After that, they visited Tous les Jours in CJ Food World and then experienced K-POP performance at CJ E&M center. They all returned to Vietnam on Sep. 31.


Currently, Tous les Jours operates in Ho Chi Minh and Hanoi, Vietnam, with a total of 19 branches in the two cities. In doing so, Tous les Jour is taking the lead in the country’s bakery industry, with additional branch recently installed in Ho Chin Minh.

Next
Behind story of the movie