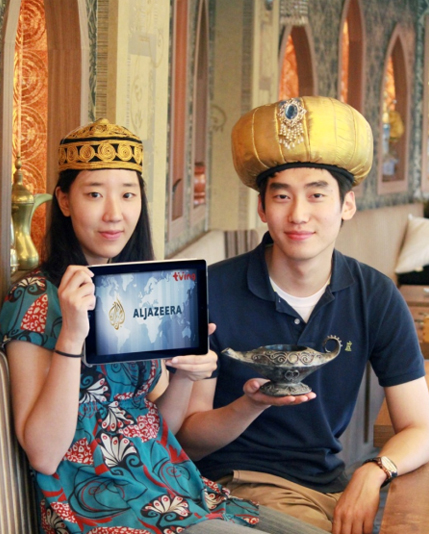 Tving (www.tving.com)’s effort to pave the way for Media Silk Road to the Islamic world and grow into the global culture platform is picking up the speed. CJ Hello Vision announced on Aug. 13 that Tving will become the country’s first service provider of Al Jazeera English, the largest satellite channel in the Islamic world. Last year Al Jazeera gained the worldwide reputation by broadcasting live Jasmine revolution in the Arab world. By airing the Arab world’s representative broadcasting program, Tving allows users to enjoy Al Jazeera news services on their hands on a real time basis in the country.

.
Tving set a partnership with Yahoo Asia early this year to introduce Hallyu contents to eight countries in Asia, setting a foothold in the Asian market. Since the entry of Tving, “K-Wave Service” has received 130 million hits as of July. Tving internally aims to introduce high-end contents to domestic users, while externally serving as a global cultural platform to demonstrate Korean contents to foreigners.

.
Just as CNN cemented its position as a news channel to report the world’s today to people around the world and thereby contributed to bringing “global concept” to the world, Al Jazeera is expected to put various world reports in perspective by providing diversity of standpoints.  Al Jazeera, which was founded in 1996, is assessed as the most independent and neutral broadcasting channel in the Arab world. In particular, “Al Jazeera English,” which started to broadcast from November 2006, is regarded as the equivalent of CNN in the Arab world and delivers Arabic viewpoints to the world. In addition, “Al Jazeera English” owns branches in about 60 countries, double the number of the branches owned by the world-renowned international news channel, by involving about 400 journalists and 300 staffs. What is more, Al Jazeera provides in-depth discussion program as well as news program aimed at people in the Arab countries and the rest of the world. Among the programs produced by the news channel are documentary program “Witness” produced by film producers across the world to deliver the story of the underprivileged and 101 East, designed to deliver episodes in Asia through interviews and discussion with panelists.