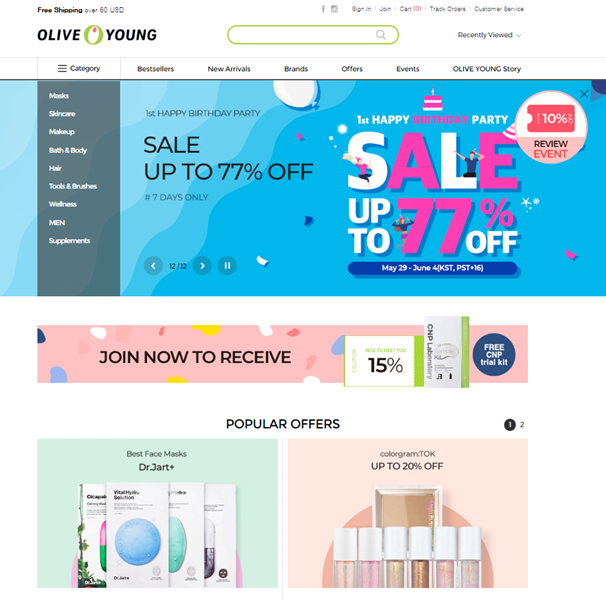 CJ O’live Young's global mall is a reverse cross-border shopping (direct overseas sales) platform where overseas consumers can purchase Korean cosmetics online. In June of last year, CJ O’live Young established its own online mall intended for consumers in more than 150 countries, not for those in specific countries, and the online mall is the first of its kind by a South Korean cosmetics distributor.

Having already undergone a stabilization phase to cement its base service structure, CJ O’live Young's global mall is growing explosively, recording an MoM sales growth rate of about 50% this year. Of particular note is that CJ O’live Young has been continuing to achieve rapid growth in spite of the COVID-19 pandemic, proving that its preemptive strategic shift for its global business from offline-centered to online-centered has come to fruition.

In addition, the proportion of Korean residents in overseas countries, who accounted for about 80% of all its customers in the early days of its operation after the launch, has been continuing to decline, with the proportion of locals having now exceeded 50%. The ongoing change can be construed as meaning that the global mall provides an opportunity to experience Korean cosmetics to overseas consumers who would otherwise have little opportunity to do so, and that the global mall is playing a leading role in the globalization of K-beauty. The number of types of products sold at the mall has also increased by three-fold, from about 1,000 to more than some 3,000.

Consumers from over 50 countries including the U.S., Canada, and Australia make purchases from CJ O’live Young's global mall, and the proportion of locals making purchases continues to increase

Contrary to the expectation that with regard to country-specific sales shares, most of the sales generated from the global mall would be attributable to Asian countries who are relatively more familiar with K-beauty products, North America, which includes the United States and Canada, has accounted for more than 80% of the total sales. North America is followed by Australia, Singapore, Hong Kong and New Zealand in that order, with consumers from a total of over 50 countries having used CJ O’live Young's global mall. At the time of the global mall’s launch, CJ O’live Young first chose the U.S.—the world's largest cosmetics market—as its preferential target country and made earnest efforts to penetrate the U.S. market, including participating in the KCON 2019 LA and spreading K-beauty trends there.

The global mall’s most-sold product group is mask packs, which ranked top in sales for most countries. The results of country-specific sales analysis show that in the Oceania region, which includes Australia and New Zealand, products with soothing ingredients such as Eoseongcho and madecassoside are among the most popular ones due to their ability to protect the skin against strong ultraviolet rays. In countries with humid climates, such as Hong Kong, products that enable users to maintain their skin with ease such as topical spot patches and disposable ampoule type kits showed strength.

As for popularity by brand, the analysis results show that not only representative K-beauty brands such as Dr.Jart+,MEDIHEAL and Clio, but also SME brands unfamiliar to overseas consumers such as Nine Wishes, IsNtree and rom&nd are gaining popularity. The explanation is that trust in O’live Young as K-beauty's representative platform is leading to the purchase of products sold there, thereby facilitating the entry of South Korean SMEs with high-quality cosmetics products onto the world stage.

“O’live Young will take the lead in the globalization of K-beauty by introducing high-quality products from South Korean SME brands to consumers around the world.”

Meanwhile, CJ O’live Young has previously set up shop at online shopping malls in overseas countries such as Japan's Rakuten and China’s Tmall and Kaola to operate K-beauty specialist stores there. CJ O’live Young plans to continue to make forays into overseas markets based on a channel dualization strategy whereby it will not only utilize its global mall but also enter each country’s leading e-commerce platforms.