CGV ScreenX and 4DX entered into an agreement with the biggest number of theater companies since first participating in CineEurope.

CJ CGV (CEO Byung-hwan Choi) announced on June 20 that it has signed an agreement with theater companies to open ScreenX and 4DX in six countries at CineEurope 2019 (hereinafter, CineEurope), a film industry convention held in Barcelona, Spain for four days starting from June 17.

ScreenX to be introduced in Nigeria, Ukraine, and Germany, and 4DX in Azerbaijan! 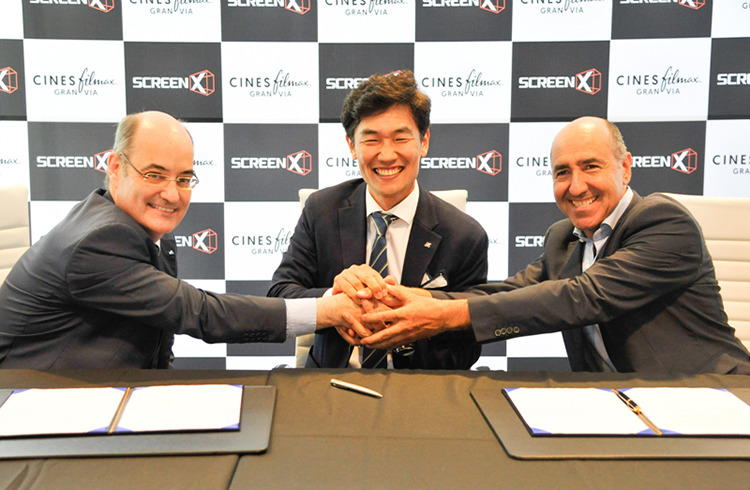 With this agreement, ScreenX will now enter Nigeria, Ukraine, and Germany, and 4DX will enter Azerbaijan for the first time.

ScreenX has now come to enter the African market for the first time by entering into a partnership with Genesis Cinemas. Genesis Cinemas is the biggest theater company in West Africa with 35 screens in Nigeria. With this agreement at CineEurope, they decided to open six ScreenX theaters.

In addition, ScreenX also attained the chance to enter Ukraine for the first time. By forming a partnership with Ukraine's Multiplex, CJ CGV will open the first ScreenX theater in the Multiplex cinemas in Odessa at the end of August, after which they will open four more ScreenX theaters in other cities by 2020. CJ CGV also signed an agreement with Russia's Myagkiy Kinoteatr to open four ScreenX theaters.

The world's first 4DX theater, where all seats are Extreme Motion Chairs, is to open in Germany for the first time

At CineEurope, German theater company Filmpalast decided to open the first ScreenX theater in Germany as well as the new 4DX theater where all seats are Extreme Motion Chairs. Filmpalast is a multiplex company with over 50 theaters in Germany, Croatia, and the Czech Republic. Extreme Motion Chairs are the latest version of the 4DX model embedded with the Sway & Twist motion effect. Sway & Twist enables the audience to enjoy a more intense and realistic motion experience in speedy scenes such as during a switch of directions, bursts of speed and drifts by adding an extensive range of swing and rotating movements. With this agreement, Filmpalast will be the world's first to showcase a 4DX theater where all seats are Extreme Motion Chairs.

4DX also is opening the first theater in Baku, the capital of Azerbaijan, in cooperation with Cinema Plus. The first 4DX theater of Cinema Plus will be in Daniz Mall, a major shopping complex that is to open at the end of the year.

"4DX and ScreenX, the special theaters featuring technologies originated and developed by CJ CGV, are receiving positive feedback as a new growth engine for cinemas in stagnation all over the world," said Jong-yeol Kim, head of Technology Innovation Division at CJ CGV. "Based on these achievements at CineEurope, we'll do our utmost to constantly develop innovative technologies unique to CGV and let the world know of our differentiated technologies."

Next
bibigo Reaches the Top of the US Frozen Dumplings Market

Previous
CJ to Build a Cutting-edge 20,000-seat Arena in Goyang with a Leading Global Company