CJENM odense Enters the Global Market for the First Time Backed by its Popularity in Korea, Sold on Eastern Home Shopping in Taiwan

- Atelier Nord Sextet Set aired on May 16 on Eastern Home Shopping in Taiwan ··· The first global sales activity of a Korean retailer’s PB
- Fully implemented the ONLYONE product, content, broadcasting, and production competencies to the Taiwanese home shopping channel, proving the content commerce potential overseas
- Showing at least a 70% sales growth in Korea ··· "Preparing to export other products including cookware" 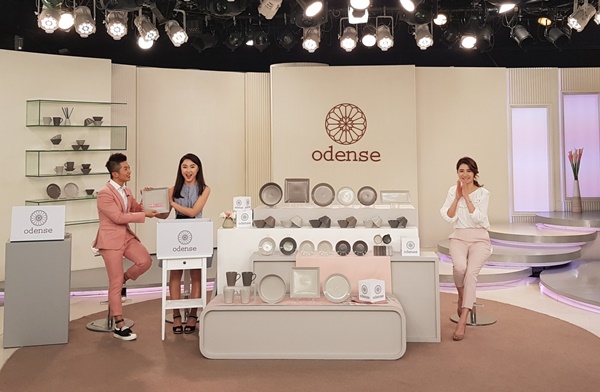 CJ ENM O Shopping Division's total kitchenware brand odense is entering Taiwan, which will see odense's first global sales. The brand presented its Atelier Nord Sextet Set to local customers on Taiwan's Eastern Home Shopping on May 16 at 10 p.m. This meant that a retailer’s PB products have become so popular in Korea that they are even expanding into global markets. The fact that Korea's tableware, which best represents the food culture, is now being sold in another country proves that the brand has succeeded in exporting not just products, but also a lifestyle.

odense's entry into the Taiwanese market is mostly due to Eastern Home Shopping's great interest in Korean media content. The management at Eastern Home Shopping, who attended CJ ENM O Shopping Division's product showcase earlier last year, focused on the odense tableware sets and Ce& T-shirts. Both products have been carrying out marketing activities in association with Korean media content or K-pop artists. Last year, odense collaborated with tvN's Youn's Kitchen and Mr. Sunshine for product placement, and Ce& has hired a popular boy band Wanna One as its spokesmodel.

Hallyu in Taiwan will play a significant role in the sales of odense. "People in Taiwan have recently been watching a lot of Korean TV shows," said an official at Eastern Home Shopping. "We're looking forward to presenting products that have appeared on a Korean reality show or drama." In fact, the Eastern Home Shopping show featuring odense plans to mention tvN's reality show Youn's Kitchen. In addition, it will display scenes of Korean TV shows, such as Korean Hostel in Spain and Romance Is a Bonus Book. Youn's Kitchen recorded 1% in ratings when it was aired in Taiwan last year.

"When selling tableware in Taiwan, we usually show the practicality and functionality of the products by showing scenes of cooking, but this is our first attempt at an emotional appeal that emphasizes the design and plating," said Zhang Jiadong, a producer at Eastern Home Shopping. "We produced the show thinking that odense is not just about dishes, but also tableware that may change the lifestyle of Taiwanese consumers."

The recently popular format of inviting influencers to home shopping shows in Korea is also applied to Eastern Home Shopping's show of odense. Fred, a famous food influencer in Taiwan, will appear on the show to share the latest tableware trends and his own plating tips, leading the show as "shoppertainment." Fred is a popular YouTuber with about 190,000 subscribers on his food-related YouTube channel and a cook who graduated from a famous cooking school.

odense has recently enjoyed at least a 70% sales growth in Korea from mid-March to late April, winning popularity among customers in their 30-40s thanks to the content commerce effect with tvN's reality show Korean Hostel in Spain. The odense Dinette store, which opened in Lotte Department Store Jamsil Branch in the middle of March, also recorded 100 million KRW in sales in just March alone. At the end of May, the brand will open a second odense Dinette store in Lotte Department Store Nowon Branch. odense also announced its plans to grow into a total kitchenware brand by expanding the product line from tableware to kitchen supplies, releasing two new types of cookware (cooking utensils like frying pans and pots) at the end of April.

"odense’s modern and practical designs combined with the popularity of Hallyu contents like reality shows and dramas will definitely work in the global market as well," said an official of odense at CJ ENM O Shopping Division. "Starting with Atelier Nord, we're going to launch other products, such as odense cookware, on Eastern Home Shopping in Taiwan."

Next
CJ to Build a Cutting-edge 20,000-seat Arena in Goyang with a Leading Global Company