Why are musicians from music school Berklee at CJ Azit Gwangheungchang?

CJ Cultural Foundation is collaborating with world-renowned music school Berklee College of Music. The foundation hosted the Career Talk and Music Concert at CJ Azit Gwangheungchang on November 10, where a variety of events attracted an enthusiastic response from the audience. There was career advice available for potential musicians as well as various genres of jazz performances.
Berklee professors, musicians, CJ Music Scholars and Korean jazz musicians went on stage to perform. There were a few musicians that stood out in particular: Professor Patrice Williamson and Jason Camelio, and CJ Music Scholars Myung-seop Shin and Jong-seon Park. These four musicians all played different roles but created a wonderful harmony in the performance. Let’s check out their interviews. Q. Please introduce yourself.
A. Hello, we’re drummer Jong-seon Park and saxophonist Myung-seop Shin, who received the CJ Music Scholarship.
Q. How do you feel about performing at the concert today?
A. I’m really nervous, but I’m determined to do a great job. (Jong-seon Park)
There’s a professor I’ve been close with during my years at Berklee who’s also going to perform today at the concert. I was excited to see that professor, which is why I can’t wait to get on stage and perform. (Myung-seop Shin) 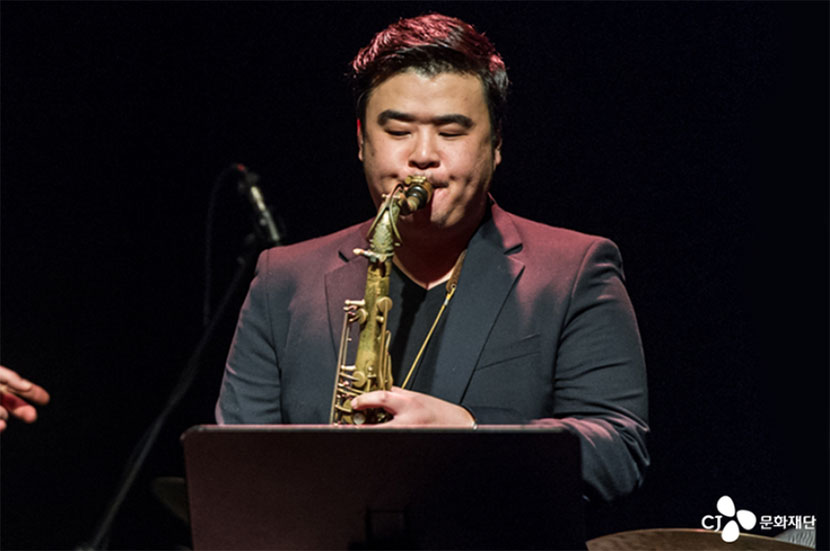 Q. What was your biggest focus in preparing for this concert?
A. I tried to make the concert more fun and exciting with my drums. (Park)
We performed pieces that embody the essence of jazz. We wrapped up the performance with a jam session (improvised) in harmony with the professors. (Shin) Q. Please introduce yourself.
A. I’m Jason Camelio, a trombonist and global director playing trombone and guitar. (Jason Camelio)
I’m Patrice Williamson, a Berklee professor and vocalist that can also play all kinds of instruments. (Patrice Williamson)
Q. How do you feel about participating in the Career Talk and Music Concert?
A. It’s a shame I couldn’t give enough advice to everyone in such a short time. I wanted to tell the audience so many things as an artist who has been in the music business for dozens of years. But I hope all the stories told by the professors and musicians have been helpful to the audience at the Career Talk. (Jason Camelio) Q. Was there a message you wanted to deliver in the Career Talk?
A. It’s important to just ‘try’ even if you’re not sure. You might fail instead of succeed, but all these experiences will help you grow. Even if you fall, you can get right back up and keep walking. (Jason Camelio)
You have to be ‘honest’ with yourself. You should find what you truly want. There was a time when I’d only pursue music that others would want to hear. But then there was a turning point that made me let go of all the thoughts I used to have, and made a real choice for myself. Instead of singing something that others would want to hear, I sang a song that has a very special meaning to me. And that song has led me to Berklee. (Patrice Williamson)
Q. Please give a word of advice for potential musicians.
A. You’re living in a time that is good for artists. There are countless opportunities for you. Don’t pay attention to what others say; just do ‘your own thing.’ Then you’ll be successful. (Jason Camelio)
People always remember the ‘rebel’ instead of the good student. Don’t follow the rules; just pursue the kind of music that you want. Believe in yourself and keep going, and you’ll be able to make a difference. (Patrice Williamson)

So these were some of the wonderful discussions with the four musicians who led the 2018 CJ X BERKLEE Career Talk and Music Concert. We could glimpse what was going on in the hearts and minds of trombonist and global director Jason Camelio and Berklee music professor Patrice Williamson that lead the Career Talk, as well as CJ Music Scholars who gave a wonderful jazz performance with them. All four of them wished the audience success and happiness. There will be another, even better concert hosted by CJ Cultural Foundation and Berklee next year, so don’t miss it!