KCON, the world’s largest Hallyu festival hosted by CJ E&M around the world each year, was successfully held in the Prudential Center, New York for two days on June 23 and 24. A total of 53,000 audience participants were gathered together, listened to K-Pop, experienced K-Beauty products, and ate Korean food. They enjoyed a variety of participatory programs themed around the pop culture of Korea and performances. Last March, Forbes, an American business magazine, picked CJ E&M as one of the three factors behind the longevity of K-Pop in the US. Having started with K-Pop, CJ Group’s efforts to spread Hallyu with beauty and food throughout the world have attained notable results.

The US is a country where KCON was held first, and it is one of those countries which possesses a lot of interest in Hallyu contents and consumes a great deal of it. Encouraged by senior management’s will and investment in cultural business, CJ was the first to plan the Hallyu festival, which combined performances, fan meetings and conventions, for American fans who have few opportunities to experience the pop culture of Korea, and recently, local media introduced the Hallyu festival as ‘one of the music festivals you must not miss in 2018 in the US’ along with South by Southwest (SXSW) and Coachella. It has established itself as a global pop culture platform.

The official social media accounts of KCON, such as Instagram and Facebook, are being bombarded throughout the year with thousands of comments made by fans who are eagerly waiting for KCON that comes back every summer. As new and differentiated contents were introduced every time, loyal Hallyu fandom was able to be widely spread throughout the US, and the number of global enterprises, aiming to reach young Americans who find deep enjoyment with KCON, is increasing year after year. Toyota has been the official sponsor for five consecutive years, and last year, Amazon and AT&T became sponsors for the first time in the history of KCON.


- An increasing number of global enterprises, including Toyota, Amazon, Apple Music, Tumblr and Billboard are involved…CJ’s efforts to diffuse Hallyu to K-Pop, K-Beauty and Korean food have been widely recognized 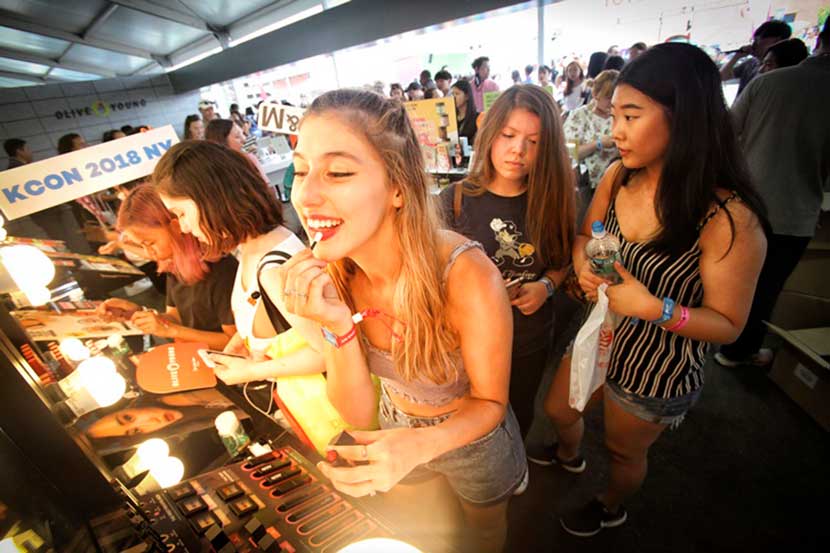 This year, participation of digital enterprises in the festival aiming to capture North American Hallyu fans attracted the attention of the industry. Apple Music added the ‘KCON Playlist’ function for listening to the songs of singers who participated in KCON performances successively, and Tumblr and Kwai held an event in which KCON tickets were given away in a raffle to people who posted images or videos related to Hallyu, such as K-Pop, K-Drama and K-Beauty, on social media, which was enthusiastically embraced by fans.

Billboard televised the videos of the convention on its official social media account in real time, proving the popularity of Hallyu in the US, which has become more popular since BTS won their Billboard Music Award last May. Another reason why global enterprises are participating in KCON is that more than 70% of the audience members are under the age of 24 and it has emerged as an influential pop culture platform in North America targeting ‘Gen Z.’


- Targeting the digital generation of ‘Gen Z,’ it has become an influential pop culture platform in North America ‘Gen Z’ refers to the digital generation born between the mid-1990s and the early 2000s. 97% of Gen Z girls are listening to at least five genres, including K-Pop. They form their own trends, and they are never reluctant to accept various cultures.

KCON, which celebrates its 7th installment this year, has been held ten times in US locations like LA and New York. As fans gathered from not only the US, but also neighboring countries such as Canada and Mexico, its size is doubling every year, and last year, the cumulative number of attendees in the US alone exceeded 400,000. During the daytime, they participate in fan meetings at the convention center, and engage in workshops, such as learning choreography, making cheering tools, discussions about the Korean culture and making Korean food, and during nighttime, they can watch the performances of popular K-Pop singers. So it is very well received among local fans.

At this KCON, CJ E&M significantly reinforced outdoor convention programs in which fans can participate in person. 180 group discussions and workshop programs, participated in by 30-40 social media influencers who are influential with Gen Z in their teens and early 20s, were held, and fan meetings that allowed the fans to meet the singers they like were held throughout the two-day festival to maximize communication between fans. During the performances on both nights, not only top Korean idol groups such as Super Junior and Wanna One, but also groups from small and medium-sized entertainment companies performed to help promising, new singers advance into overseas markets.

“Recently, K-Pop and Hallyu became hip cultural genres among American teenagers,” stated Hyeong-gwan Shin, head of the Music Contents Division of CJ E&M. “We will capitalize on the pop culture of Korea, which has penetrated into the daily lives of people around the world, to increase communication and engagement with Gen Z fans and make Hallyu sustainable.”
KCON is planning to continue the Hallyu fever in Staples Center and LA Convention Center in Los Angeles on August 10 to 12.