Asian Chairshot has been capturing the imagination of fans on stage at various music festivals and events with their intense music. Recently, Asian Chairshot organized a monumental concert, which was also the band's first step towards realizing a true second act in their music career. It was Asian Chairshot's standalone concert that was held at CJ Azit Gwangheungchang in celebration of their upcoming European tour. The standalone concert was packed with excitement and offered the audience the chance to fully enjoy a Korean sound. Let's take a closer look at what transpired. Participants of the 9th Tune Up Competition, Asian Chairshot features a sound unlike any other throughout the world. The band is regarded as opening up a new horizon in rock music with their unique Korean sound. Asian Chairshot are expanding their influence worldwide. They are scheduled to embark on a European tour, going from the UK to Spain to Belgium! Before heading off to Europe, Asian Chairshot held a standalone concert in celebration of the tour and received a big cheer from their Korean fans. The CJ Azit Gwangheungchang concert hall truly heated up with excitement from the audience. On this day, the venue's lobby featured a map of the European Continent with the tour's concert venues and dates written on it. The celebratory concert was a meaningful occasion where many fans could see the band's tour schedule with their own eyes and cheer for the band. In addition, as-yet-unseen photos of the band were liberally placed throughout the venue so that fans could take home as many of the photos as they want to after the concert, which made the atmosphere even friendlier. The flags of all nations that filled the lobby of CJ Azit Gwangheungchang seemed to further elevate the prestige of Asian Chairshot, who are soon headed for a European tour. The audience, full of excitement, looked towards the stage above which the band's power logo hung and waited for the concert to start. 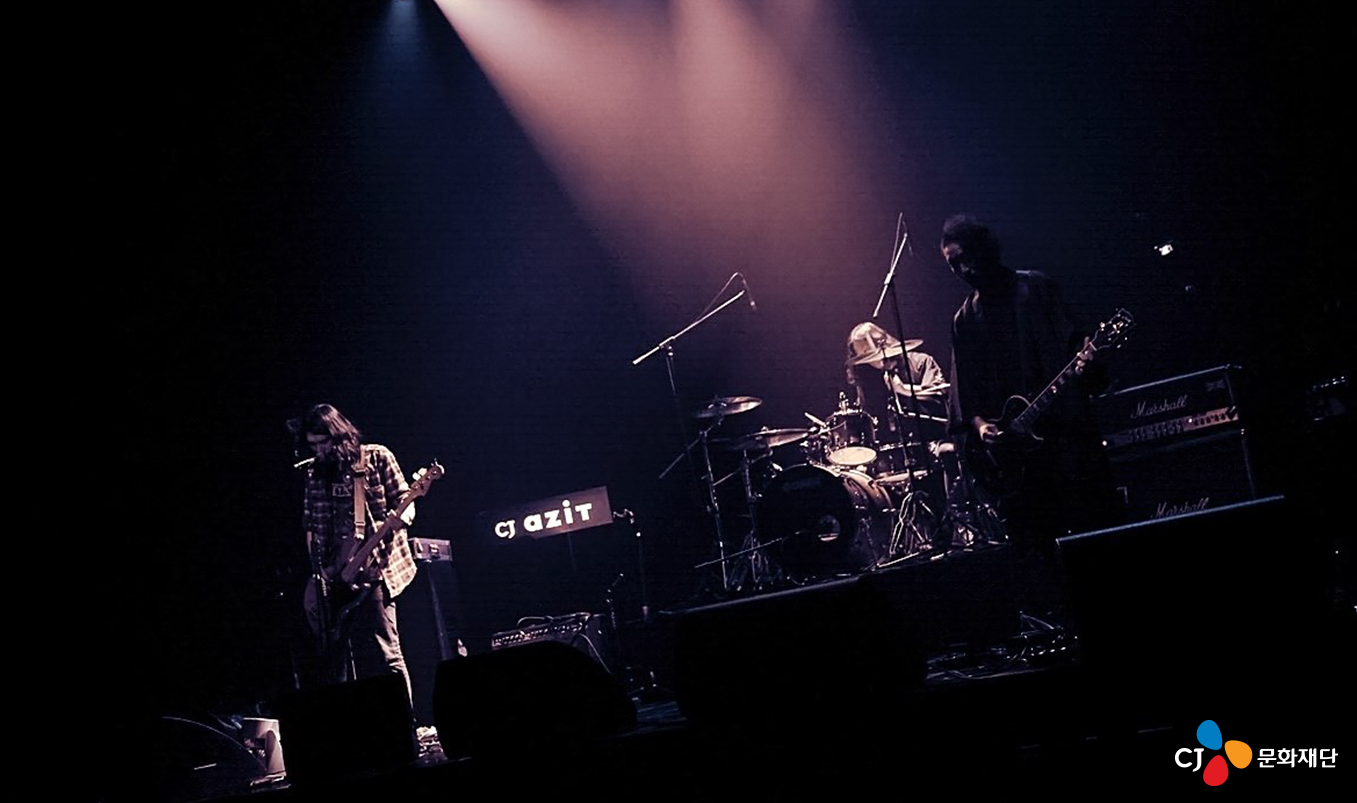 Asian Chairshot's standalone concert took place in two sets. The first set featured an impressive stage performance where the members of the band showed up in hanboks and masks. It was a moment when the band overwhelmed the audience with their abundant charm. As the concert started, a video that was planned and produced personally by the band played and captivated the audience's attention. Complimentary comments from legendary K-Music musicians describing the music of Asian Chairshot were particularly interesting.

Asian Chairshot, who appeared with the video, caught the ear of the audience by starting their set with a succession of particularly Korean-hued songs among their hits, including "Girl," "Talchum," "Tabakneya," and "Look at Me." The performance was staged in a largely organic manner, which enhanced the overall performance, composition-wise. The grand sound of the drums and the sound of the electric guitar were overwhelming. Vocals were then added to the mix to uncannily harmonious effect, creating an impressive, unique Korean rock sound. 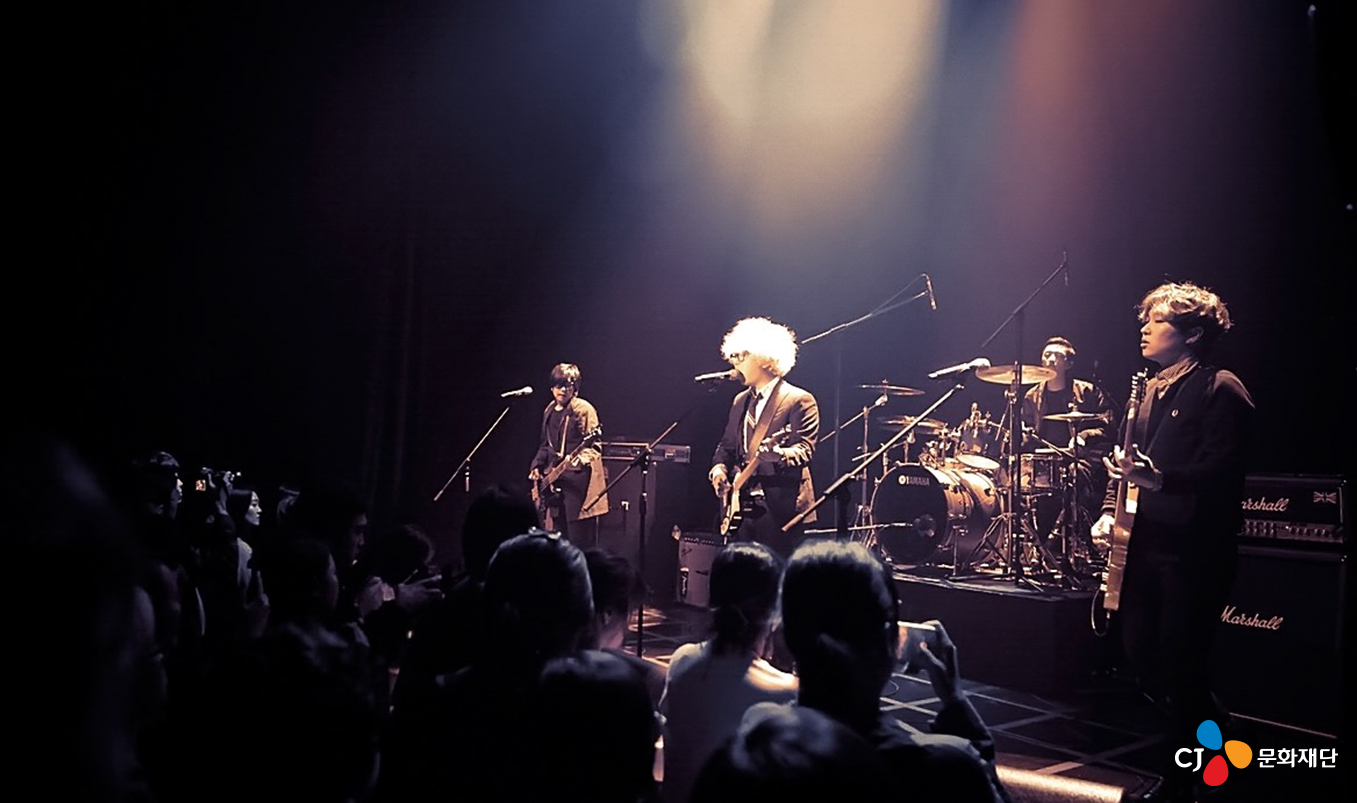 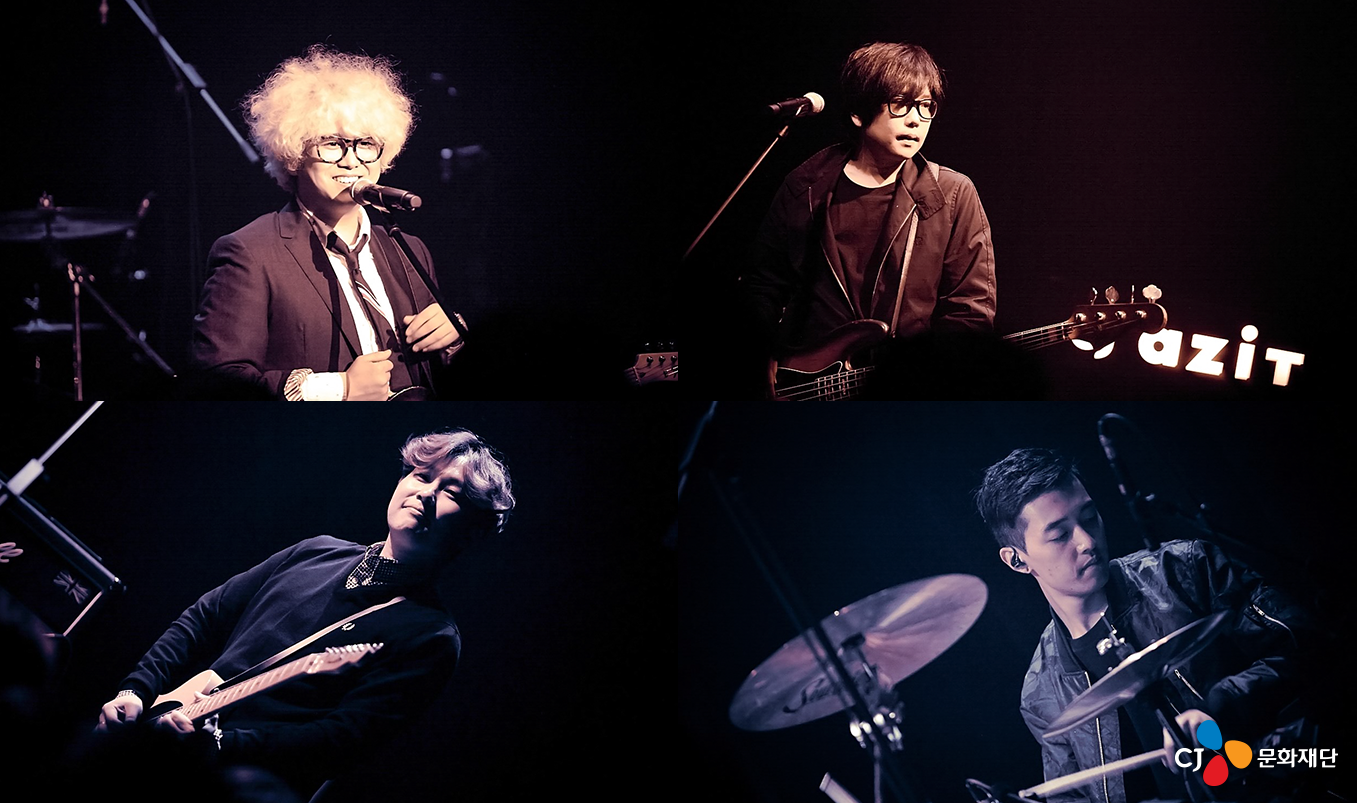 Q. Do you have any message of support for Asian Chairshot who will soon head off for a European tour?
A. We've been to Europe a few times, too. But we've never been to the UK. The UK is like where the career of an international band really starts. I hope Asian Chairshot will show the UK the power of Asia. Be sure to play your music with elegant head movements so that the people there can clearly see your beautiful hair. Good luck!

Q. Please tell us what kind of performance you will present on stage at Asian Chairshot's standalone concert.
A. Our performance will be completely different from that of Asian Chairshot. If anything, we have prepared songs that are distinctly different with their music. We have arranged a performance that the audience will find fresh and interesting. 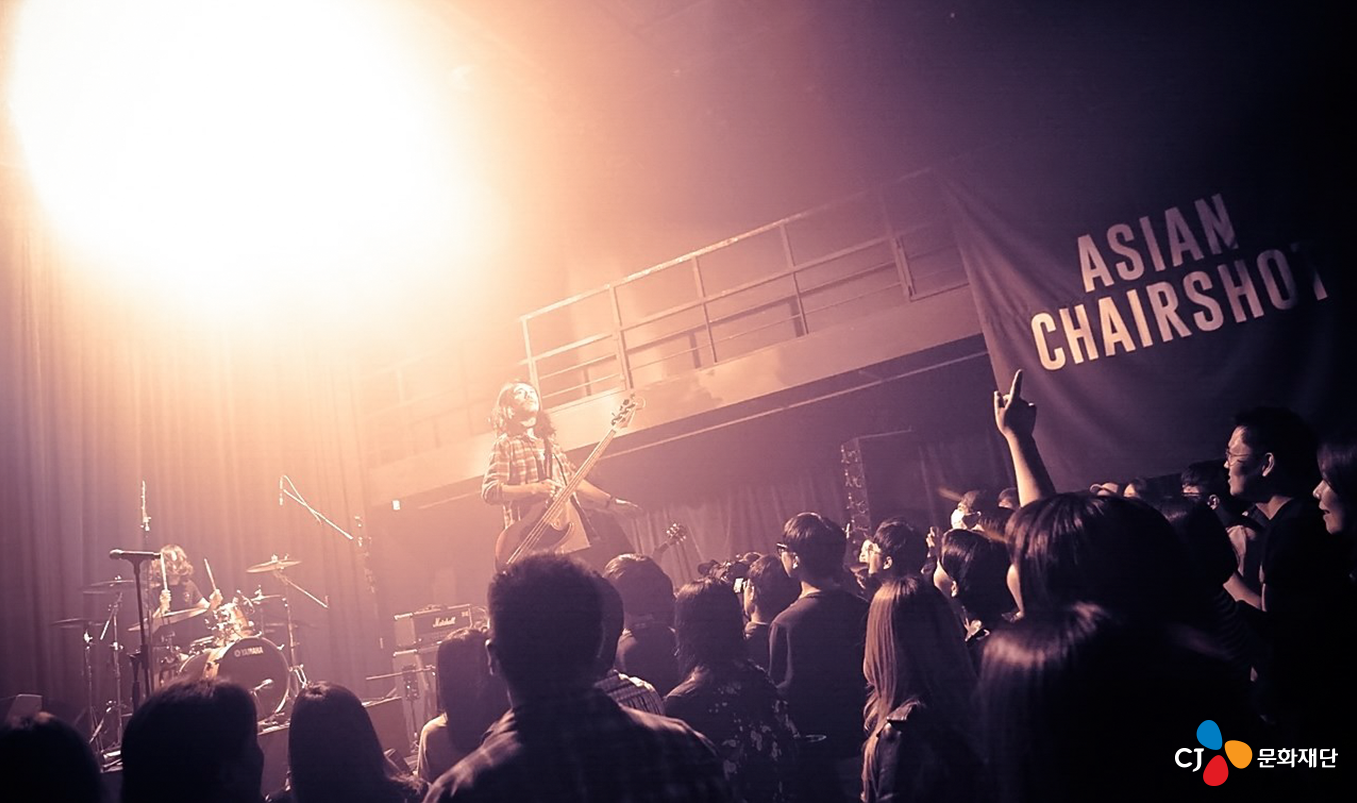 With the start of the second set, the concert reached its climax. The set featured songs frequently played at their shows such as "Asian Violation King," "Train Heading to the World," "Lord of the Basement," and "In the Rain Shower." But the band also played new songs that had previously not been heard. These songs included "Complaints," "Dear Sun," and "Today" and were welcomed by Asian Chairshot's old fans. As if in response to the cheers from the audience, the band's vocals, guitar solos, and drum sounds created perfect harmony. 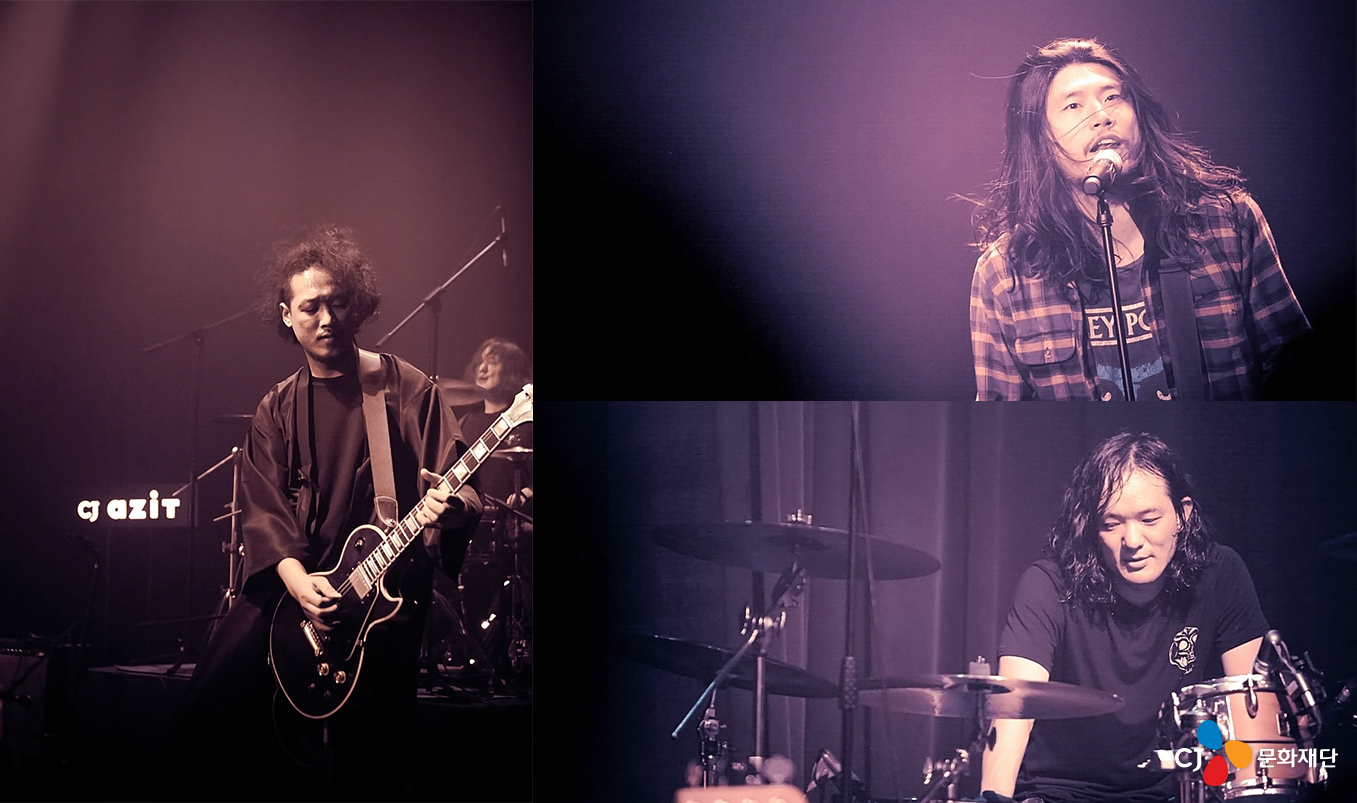 This concert was particularly significant in that it was the first standalone concert since new drummer Lee Yong-Jin joined the band. Through his fantastic drum solo, Lee Yong-Jin clearly showed that Asian Chairshot were fully functioning as one. After his solo, Lee Yong-Jin said a word of gratitude in a rather shy manner, and that drew a storm of applause from the audience. Asian Chairshot also did not forget to have a fan meeting session after the show. They must have been tired after three hours of putting on a powerful performance. However, Asian Chairshot gave every one of their fans that visited the fan meeting their autographs, as well as a moment to remember. The fans were all smiling widely, which conveyed their sincere support for Asian Chairshot's European tour.

A Mini Interview with Asian Chairshot Ahead of Their European Tour Q. Please tell us what you think of this standalone concert celebrating your band's upcoming European tour.
A. We have arranged to play a standalone show for our upcoming European tour. This is our first standalone performance since our new drummer joined the band. Because we had little time to prepare for the concert, we could not completely realize what we had in mind, stage directions and other plans. However, we have prepared very hard for this concert to show our many facets.

Q. Please tell us briefly about the performance you will show at this standalone concert, which is your first standalone concert in a while.
A. This standalone concert has been put together in a short amount of time. However, as we made preparations, we began to feel the desire to do things better. We will play our old songs that you could not hear at our recent concerts. And as things have turned out, we may also be able to showcase new songs that are not technically new songs. In addition, we have divided the concert into two sets. The first set was designed so that you can get a taste of the directional side of things that we want to pursue going forward. We will be in Europe on Halloween this year. However, you can look forward to an awesome Halloween party with us next year. Q. We are also curious about how you feel now that your European tour is right around the corner.
A. We were so disorganized when we played lots of shows overseas in the past. However, for this tour, we have made all preparations ourselves, from A to Z. Maybe because of that, we feel more differently about this tour than before and we really want to push ourselves to the limit. We've made up our minds to try hard and create good opportunities for us. We promise that we will embark on this tour well-prepared and with a deep sense of responsibility.

Q. For Korean fans who cannot join your European tour, would you tell us key things to know about the shows on the tour?
A. Of our many songs, there are songs created to communicate with the audience when we are on stage, and there are songs created to express our artistry. We have prepared ourselves in order to present such songs for our European tour. We also have tried new things in terms of stage costumes, stage directions, and so on. We prepared this standalone concert as sort of our final rehearsal for our European tour. We simply aim to have fun at this concert. Asian Chairshot, a band that possesses a unique Korean rock sound! It was totally moving that we could watch Asian Chairshot's true second act begin together with the band. Here's hoping that with this concert celebrating the band's European tour as a starting point, the band will impressively present Asia's rock throughout their 20-odd European tour dates. Let's cheer for Asian Chairshot who will come back to us after playing awesome music to European audiences!

Next
Who is Your Hero?