KCON 2016 touches down in Japan

KCON 2016 touches down in Japan;
crowds pack the M COUNTDOWN Concert on April 9!

KCON 2016 Japan was held at Makuhari Messe, a Japanese convention center outside Tokyo. Following from its debut last year, the event this year was bigger and better, with two concerts over two days and various participative programs for the public to enjoy. On the opening day, more than 15,000 K-Pop fans came to experience Korean culture and products.

Through the M COUNTDOWN Concert, K-Pop brought people together The M COUNTDOWN Concert concluded the first day of the event to a sell-out crowd of 10,000 enthusiastic Japanese fans. This amazing concert with fancy sets and powerful performances from worldwide K-Pop stars delighted fans, making it an enchanting first night in Japan.  In the concert on the first day, eight leading K-Pop artists, such as Kim Sung-kyu (from Infinite), Nicole, Lovelyz, Monsta X, AOA, N.Flying, Winner and Zico, delivered wonderful performances full of audience interaction and the sound of cheering fans.

The hip-hop boy band Monsta X kicked off the M COUNTDOWN Concert with a powerful performance that got the crowd revved up. This was followed by the girl group Lovelyz, who received an explosive response for their lovely and lively set. Nicole electrified the audience with her unique music and impressive performance, and newly-debuted band N.Flying provided powerful music that fans adored.

In addition, the influential girl group AOA gave a bright and breezy performance that received fervent applause from male fans in particular, and Winner’s soulful voice captured the hearts of the audience. Zico’s special set with the song “Say Yes or No” also caught people’s attention. Finally, the concert came to a close with Kim Sung-kyu’s sweet ballads. 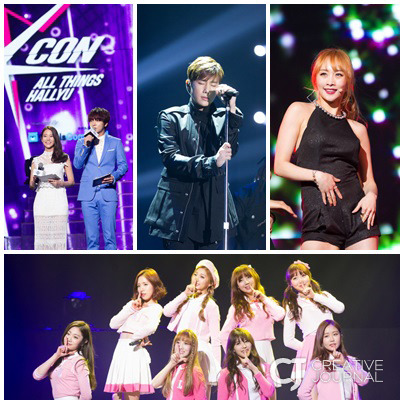 Meanwhile, MC Yunhak and Han Seung-yeon engaged the audience smoothly and wittily with their fluent Japanese. Seolhyun of the girl group AOA appeared alongside Han and Yunhak to support them as a special MC, with her charm captivating the crowd.

For the full 120 minutes of the concert, fans enjoyed singing along to the stars’ songs and chanting the names of the members. Some fans were even moved to tears as they watched the performance of artists they like in person.

“The concert was a global music festival that brought K-Pop artists to Japanese fans. Also, I felt the power of the Korean Wave by seeing local fans fascinated by K-Beauty, K-Food as well as K-Pop.” said a director Lee Eung-gu, a chief producer of Mnet.

To keep up the excitement on April 10, 8 artists including Kangnam, Day6, Boyfriend, Block B, Jun Jin (from Shinhwa), 2PM, Twice and Heize sang their hit songs in front of rapturous fans.

The M COUNTDOWN Concert that delivered K-Pop music fantastically to Japan on April 9th and 10th will be specially aired on Mnet at 6 PM on April 14 for two hours. As two Japanese broadcasting channels Mnet Japan and Yahoo! Gyao, will also be airing the concert, local interest in K-Pop is expected to remain as fervent as ever.

Meanwhile, KCON 2016 Japan is a festival that combines music concerts with various programs, including a “meet and greet” that gives fans the chance to meet artists from the concert, classes to learn Korean or K-Beauty styling tips, as well as exhibition booths from Korean companies where visitors can experience Korean lifestyle products. This is why many Japanese fans paid such huge attention to the festival.

At the event, a total of about 80 companies participated to promote products targeted at Japanese market. Of those, 50 companies are small and medium-sized businesses in Korea.

On April 8, a day before KCON, the SMBs selected through pre-application had a business talk over 330 times with 127 Japanese buyers, including Rakuten, a leading company of “open-market”, Tokyu Hands, a large supplier of everyday items, and Walt Disney Company Japan, at the export conference hosted by Small and Medium Business Administration, Large and Small Business Cooperation Foundation and KOTRA. These talks have helped identify the possibility of entering in Japanese market using the Korean Wave.