KON, K-Music advances into the world

Many have heard of KCON before, but most don’t really understand what it is.
So what exactly is KCON and why all the craze surrounding it?
This is your friendly guide to these and other questions you may have about KCON. 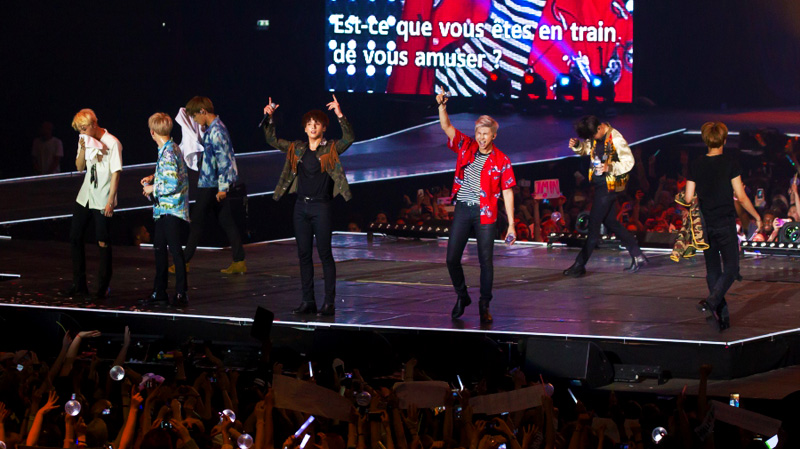 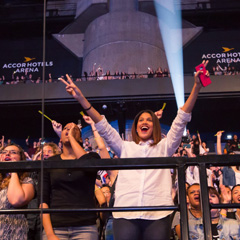 Despite having different languages, the crowd gathering at the Accor Hotel, Paris, were greatly enthusiastic about the performance of BTS.

Olivier Cachin, a French journalist with expertise in hip-hop music, attended KCON France 2016 at the Accor Hotels Arena on June 2 and, four days later, published an article titled KCON Paris: Marshmallow pop, boy bands, light show…I have never seen such fervor on the weekly publication L’Obs. Seemingly taken aback by the precision choreography and the haute couture side of K-Pop, Cachin wrote, “I never imagined I would witness such a spectacle,” and called K-Pop “a new cult phenomenon and an ascension to a whole new level”. In the recent years, K-Pop has, in fact, thrilled fans all over the world with music that’s not only meant to be heard, but also to be seen and felt through stage performances and wardrobes as energetic and spectacular as the music itself.

KCON France 2016 was the first KCON event to be held in Europe and commemorated 130 years of diplomatic relations between Korea and France. The event included performances by some of the biggest names in K-Pop, such as SHINee, f(x), Block B, F.T. Island, BTS, and I.O.I. The event’s tagline Ari (“beauty” in Korean) Rendezvous (“meeting” in French) was also made apparent when the entire lineup of performers took to the stage to sing two versions of the classic Korean folk song, Arirang, and in doing so created a moment of beautiful meeting between Korea’s past and the present.

The 13,500 audience members representing Britain, Spain, Sweden, Ireland, Germany, and many other countries from throughout Europe sang along to their favorite K-Pop tunes at the concert and got to satiate their curiosity for all things Korean by experiencing K-Food, K-Drama, and K-Fashion at the convention part of the event. The Austrian webzine Hello, Asia! reported that “the minimalistic museum of traditional Korean food was beautiful,” and Olivier Cachin himself described the fest by saying, “Everyone at KCON was as one.” All this, however, still doesn’t address the question we started with: What exactly is KCON?

Your Blunt
and Yet Gentle
Explanation of
KCON

Ask any K-Pop fan anywhere in the world what the biggest and the most comprehensive K-Culture event is, and nine times out of ten they will say it’s KCON. KCON is in its most basic form a hallyu festival for K-Pop fans overseas and a massive celebration consisting of a body-rocking K-Pop concert and an eye-fixating K-Culture convention of a grand scale.

For K-Pop fans, KCON is not just about the music; it’s an opportunity to experience all aspects of hallyu from K-Food to K-Drama, K-Fashion, and even K-Travel. For South Korean companies and businesses, on the other hand, KCON is a chance to explore hallyu-related business opportunities through the event’s numerous workshops and programs.

The festival has grown massively over the past four years since the very first KCON event in Irvine, California in October 2012 to engage and interact with hallyu fans in a number of other major cities around the world. The numbers speak for themselves. KCON USA is the single largest KCON event in the world and, in the past four years, the number of its headliners went from 6 to 16, guests from 55 to 225, programs from 25 to 150, and the audience from 9,000 to 75,000.

KCON USA has grown so large that in 2015 KCON USA held events in both Los Angeles and New York and became the definitive coast-to-coast hallyu festival in the continental USA. Thanks to KCON, K-Pop fans get to enjoy festivals with more programs and lineups than they can shake a stick at while K-Pop musicians, content creators, and businesses get to access a wider fan base with an even wider range of interests and preferences and commit themselves more to creating content, products, and services that will resonate with the fans.

Beyond Your
Wildest Imagination

K-Culture, with K-Pop leading the way, has continuously expanded its fan base around the globe by constantly innovating and updating itself. KCON followed suit with bigger and better events each passing year and demonstrated through KCON France 2016, which was the first KCON event to be held in Europe, that there is still a huge international demand for K-Pop and K-Culture. The organizers of KCON took notice of this and plan on adding special sections for introducing K-Beauty and South Korean electronic devices to this year’s KCON USA, the largest KCON event of them all. What’s more, KCON LA will feature a food street zone outside the main venue so that visitors could experience the Korean culture without necessarily attending the concert or the convention. 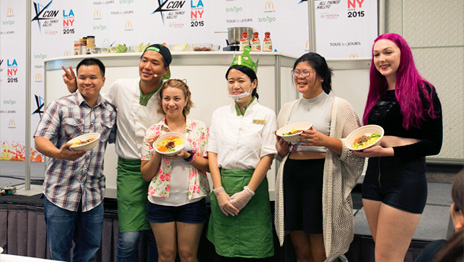 From K-Food to K-Beauty, an exciting
Journey into Korean Culture

Foreign fans cook and enjoy K-Food together and discover beauty tips through K-Beauty products at the KCON 2015 LA Convention. 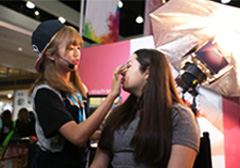 K-Artists and numerous fans of different nationalities were brought together at KCON 2016 NY! This was an opportunity to experience the growing phenomenon of K-Music.

KCON,
Around the World

This may come as a surprise to some, but KCON has indeed become a global force in recent years with KCON events now being held in LA, New York, Paris, Tokyo, Guangzhou, and Abu Dhabi. Each year, the circuit begins in March in Abu Dhabi, the latest city to be swept up in hallyu, and makes its way to Tokyo in April, Paris and New York in June, LA in July, and finally Guangzhou in October. In particular, this year’s KCON NY (June 24 – 25) and KCON LA (July 29 – 31) will be the largest and the most exciting KCON events in history and are sure to send shockwaves throughout the US and beyond. 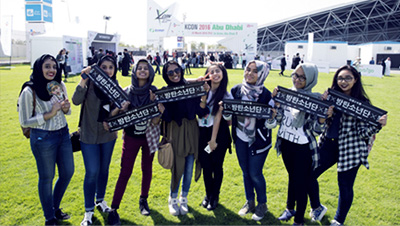 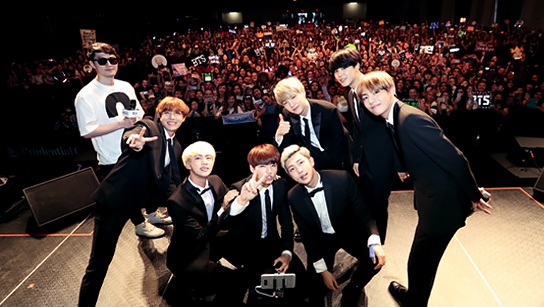 The biggest significance of KCON, which is now being held at trend centers around the globe, is that it’s a gathering and a celebration of people in their teens, twenties, and thirties who value their own experiences and individuality over what others think, are ahead of their time in terms of self-expression, and are fascinated by the new cultural phenomenon that is hallyu.

Everyone at KCON
was as one.