One cup of funny Drip,

Are you familiar with the expression describing a “say-
anything party?” These are quite common buzzwords on
social media these days referring to making a joke or saying
anything you feel like regardless of the context. At first it may
seem a bit lame, out of context and may even provoke one to
think, “What on earth?”. However, you’ll soon be on the look-
out for the festival of words, or in other words, drips.
You’ll find your lips curling up into a smile in no time.
Snack Video “Daily Drips” utilizing CJ’s brands like Hetbahn, Tous Les Jours and Spam
These fun jokes include recently popular study methods. The ‘tiger leather study method’, which means leaving only the
name on a test paper. The ‘Olympic study method’, which is related putting significance on taking a test. Also, the
‘cabbage study method’, which is all about giving up the test. The main characteristics of these fun Drips are based on our
everyday lives. Not only things like ‘Hetbahn’, ‘Spam’ or ‘Tous Les Jours’, which we can see easily in supermarkets or on the
street, but also the title of TV shows, such as ‘Wednesday Food Talk’ can be used in fun Drips.

What is the most beautiful Hetbahn in the world? What are the five words of lemon, vinegar and plum? Now, perhaps,
you have an idea of what makes these Drips fun.
Drips are quite absurd as they have no context. Sometimes they just seem like wordplay, but that’s what makes them so
ingenious and interesting, and part of their charm. Because Drips are fun for so many as they go about their daily lives,

it is easy to create empathy. This is the reason why fun Drips have become a part of the daily play culture among Gen Z.
Generation Z consists of 13 to 22 years olds that were born between the mid-1990s and early 2000s. Having grown up
surrounded by the digital environment right from their early days, they are used to smartphones and prefer images or videos
over texts. Thanks to them, online media platform such as YouTube, Afreeca TV and Twitch can be increased geometrically
and one-person media, which is specialized to these kinds of platforms, has become a popular trend. 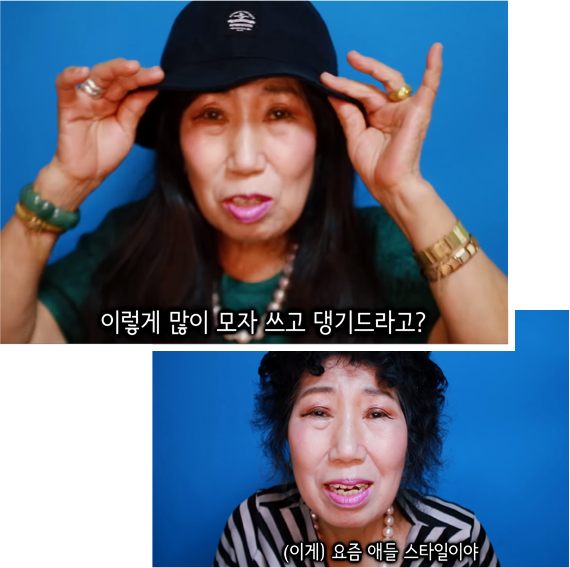 The oldest Korean and an outspoken YouTuber is
popular among teenagers and 20-somethings.
provided by : CJ ENM DIA TV Creator ‘Korea Grandma’

Top Normie of the Elderly

There is a 1-person creator that has become a Youtube star
with her humble jokes and wit. It’s none other than ‘Korea
Grandma’ under the DIA TV label. Despite her 72 years of
age, she communicates with the younger generation at their
level. Her secret? Drips. Her relentless words that are raw
beyond honesty have gained an explosive reaction from the
public, which have seen her being elevated to her Top
Normie status.
Korea Grandma’s words are unprecedented and her themes
are heretofore unheard of. < Korea Grandma’s Makeup To
Feel Like Kids These Days > and other current trend makeup
videos also trigger explosive bouts of laughter. Daily videos
like < Grandma is Really Really on a Diet > convey her real life
to communicate and identify with the other generations.
In the end, it is no surprising to see that she finally became
the top pick of the 1020 generation, generation Z.
*Drip: Korean Slang derived from the word ad-lib meaning jokes using wordplay or memes

Gen Z subscriptions thanks to Drips

‘Fun Bakery XtvN < Sipara Market >, provided by : CJ ENM
A lot of Gen Z are subscribing to “Sipara Market” of “Fun Bakery” from XtvN, in which non-Korean speakers can be seen l
istening to K-Pop music without subtitles giving all viewers plenty of laughs. Listening to “Bboom Bboom” sung by
MOMOLAND, Sayuri Fujita shouted suddenly that she heard the word “gorilla.” In this way, generation Z have fun watching
foreigners provoking unintentional laughter. They have fun with the B grade emotions that come from unexpected situations,
not with triggers or scripts.

Youtube channel contents < Albassul & Albameoham > by STUDIO ONSTYLE with 1.27 million subscribers, provided by : CJ ENM
The same situation can be seen with STUDIO ONSTYLE “Albassul & Albameoham” in which part-timers talk frankly about
their jobs. The people that appear in the show are all in their late teens or early 20s, and yes, of course, they are Gen Z.
No wonder the show is popular. The guests use a bunch of words created by Gen Z such as “Minza (meaning “minors”)” and
“pay careful attention to your blood pressure” and generally make fun jokes that are aimed towards younger viewers. 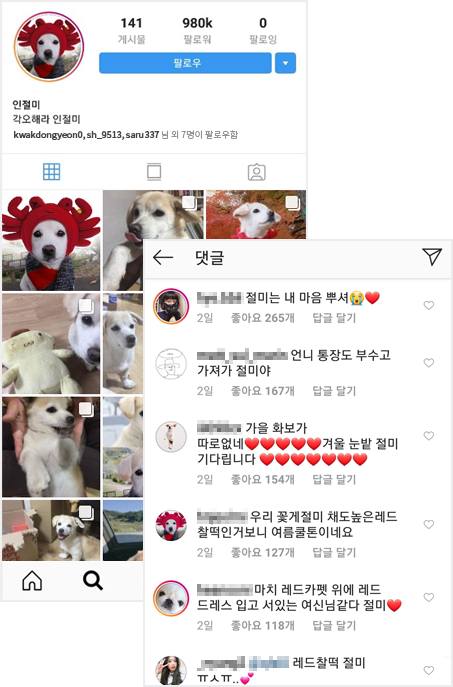 The Z Generation also enjoys ‘participation’, meaning
‘playing in the comments section’. ‘Jeolmi’ is a puppy that
a person had rescued from a reservoir ditch.
The coincidental rescuer, whom the public refers to as
‘Jeolmi’s Sis’, posted a photo of the puppy for some advice
on an internet community. However, this photo had an
unexpected and extraordinary impact! The popularity led
Jeolmi’s Sis to open an Instagram account for Jeolmi
(@zzangjeolmi), which soon became a comment drip show
where people could show and share their affection for the
puppy. “Let’s take Jeolmi for a walk in Gocheok Dome.”
“I beg you for a post on every inhale and a story about every
exhale.” “Jeolmi, I have two hearts. One beats for me and the
other beats for you”. The people making comments such as
these seem to be in a battle to show who aches the most for
the puppy. On top of that, Jeolmi’s owner, who also operates
Jeolmi’s social network accounts, belongs to generation Z.
She is quite capable of responding to the drips because she
too is a part of generation Z.

We commonly refer to daily life as the ‘rat race’. Similar days
repeat themselves and ‘fun’ may be hard, if not impossible,
to find. However, the members of generation Z look to poke
fun at everything in their daily lives. They watch as drips unravel
in 1-person media content and post comments to participate
as these drips go ever marching on. Thus, videos of freely flowing
drips and comments can really be said as being the new
playground for generation Z.
Also, the latest trends often arise from the things Gen Z enjoy. Watch Korean Grandma and Jeolmi, the stars of Gen Z, and
you will nod your head. This is the reason why so many brands are changing how they communicate with those from Gen Z.
If you are burnt out from the same thing day after day, week after week, how about a bit of a refreshing outlook with some
drips? Just like a cup of coffee brings a moment of peace, drips will bring you some well deserved laughter.
#DailyLife#Drips#DailyDrip#Joy#Fun#GenerationZ#GenZ#DigitalNative#SmartPhone#YouTube#SinglePersonMedia#ParkMakRye#BGradeEmotion#FunBakery#SiparaMarket#STUDIOONSTYLE#Albassul#Comments#Communication#Jeolmi#Refresh#Hetbahn#ToosLesJours#Spambibigo#Mnet#OliveYoung#WednesdayFoodtalk#DASIDA#Culture#LIVENEW#CreatingCulture#CJ
11
Vol.