A passionate American columnist who writes stories about Korean music faster than the Korean media.
I met Jeff Benjamin, who wrote K-Pop reviews and articles on Billboard and Fuse. I listened to him about his life with K-Pop and KCON. We understand that you are currently writing a lot of stories about music.
Listening to music is a big part of your everyday life. We are curious about your daily routine. Do you enjoy listening to music even when you relax?

I usually start each day with a fresh start by working out at a gym before going to work. I check my news and listen to music while I work out. New K-Pop songs are released in the middle of the night in New York City, so I usually listen to new K-Pop music and watch K-Pop music videos in the morning. I particularly like to watch new music videos while running on a treadmill. After the workout, I go to Fuse TV, my workplace. It is my job to write articles and reviews about various kinds of music as well as K-Pop. I produce interesting content with writers, video producers, and social media editors. After leaving my office at Fuse TV, I write K-Pop articles for Billboard or other media outlets, or even take on external projects. In addition to Billboard and Fuse, I contributed stories to the New York Times, Rolling Stones, Apple Music, and Teen Vogue this year. I also worked with Tumblr, Prudential Center, and so on for K-Pop content projects. After finishing work, I go back to the gym again or have dinner with my friends.

Since when did you first start following K-Pop?

Since YouTube became a popular part of mainstream culture. Many music critics that I recognized and followed at the time became interested in Korean music. In the beginning, I did not quite believe them, but favorable reviews of K-Pop came out, leading me to listen to Korean music. Next, I began to fall in love with the K-Pop world while watching music videos and then live performances. I was so fascinated by K-Pop that I felt like I wanted to know more about K-Pop after I listened to “Because of You” of the girl group After School. It was a mixture of various styles (pop, dance, hip-hop ballad, electronica). It was a very uplifting song to me as I enjoyed various genres of music. Every time I get asked what was the first K-Pop I liked, this song immediately comes to mind.

“
I began to fall in love with
the K-Pop world while
watching music videos
and then live performances.
” 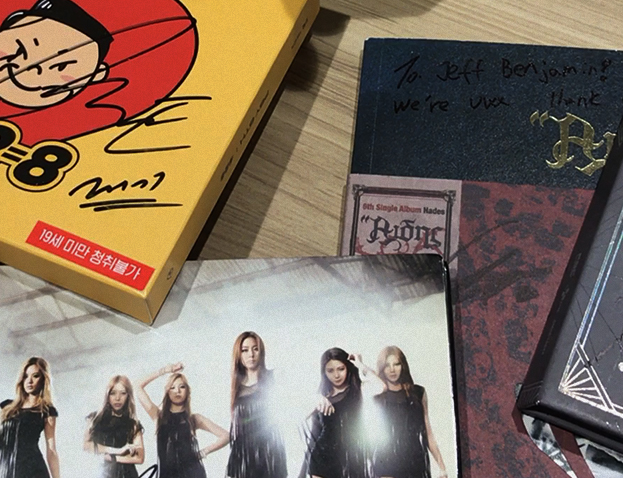 What is your favorite K-Pop album?

It’s a tough question, but there are three albums that I can think of. First, the Brown Eyed Girls' “Sound G” was the first K-Pop album that overwhelmed me. "Abracadabra" showed an impressive edge and provocative concept. But the whole album fully generates various sounds and moods and amazes music fans like me. In the case of the album “Pink Tape” by f(x), the title song 'First Wisdom Tooth' was also great, but the songs 'Airplane' and 'Following' are well-made songs that attract my attention. Finally, the third and final album is “Modern Times” of IU. IU produces amazing musical work every time. But the reason why I'm particularly excited about this album is that it is loaded with highly engaging vocals and emotions regardless of my own personal tastes (soul, jazz, and R&B music). Listening to this album, I felt that IU was a musician who understood herself very well.

Akdong Musicians also always introduces interesting and unique album packages. Play is the best debut album I have ever encountered. Wonder Girls’ “Wonder World, Reboot” and 2NE1’s “Crush” are also masterpieces. I cannot forget to pick Big Bang’s “Alive” and After School’s “First Love.” Recently, I enjoyed albums of Seventeen (who have released some great songs since their debut EP) and the BTS (Wings and Hwayang Yeonhwa). I also listen to R&B albums of Suran, Dean and Heize. There are times when this music transcends your feeling and understanding of pop music.

“
It is rewarding and exciting
to observe how people's attitudes
toward Korean music change.
”

As a journalist and a reporter, you have met K-Pop artists.
Are there other K-Pop listeners among people who you usually meet, and if so, how do they respond to K-Pop music?

My K-Pop columns received mixed reactions. Readers who did not listen to K-Pop felt awkward and unfamiliar with it. Some people were positive about pioneering new territory, but others said that K-Pop was just a fad and told me not to pay much attention to it. However, I continued to talk about K-Pop, and then I started to see more and more people recognize the value of my efforts. Now, K-Pop is part of my identity. People who I haven’t seen for a long time say that they saw me working with Korean artists, and that’s what drew them to me. There are people who like K-Pop playing around them or say they are fans of a certain K-Pop artist. I have been working in this field for more than six years, and it is rewarding and exciting to observe how people's attitudes toward Korean music change.

It seems that you are interested not only in K-Pop but also in Korean cultural content and lifestyles in general.

K-Pop is not a music genre, but a music scene, I think. K-Pop fans not only are interested in K-Pop music, but also love K-Pop music videos, music programs, variety shows, dramas, TV commercials, and even their K-Pop idols’ favorite kinds of food. As I continued to deal with K-Pop, I can say that I was also influenced by Korean culture. I began to accept certain elements and became interested in men's beauty and hair products while following male idols who invest in their looks. Although it is important to maintain identities and roots, I think a lot of culture and moral values I have learned come from K-Pop and Korean society. These are also related to how I project myself.

You have a deep understanding of various
K-Pop artists, and show your love
and passion for music in your stories.
Can you elaborate on this kind of passion
you exhibit and where it comes from?

It's a very good question. The job of a music journalist is a big part of my personality. When I was in New York, I tried to change my major from the music business to music journalism, and (surprisingly) my father did not oppose my plan. This is because, during school days, I listened to music late night every day, read related articles, and posted my stories on my blog. I am happy to hear that you feel my love and passion for music in my writings. In fact, music is a part of me and a wellspring of creativity that is expressed through language. You majored in the music business, but now you are working as a music journalist.
Looking at social media, it seems that you are close to some artists.
What are some of your most unforgettable moments with K-Pop artists?

It's not an easy question. Each encounter with an artist has its own uniqueness. One was in an interview with CL who visited New York City during New York Fashion Week. It was her first interview about her career and ambition as a soloist. The interview was held at the East Village hotel where she stayed. CL talked about a dream of representing all Asian women in addition to her thoughts about music. As an individual, she aimed for higher goals and explained to me about this. It made a strong impression on me. 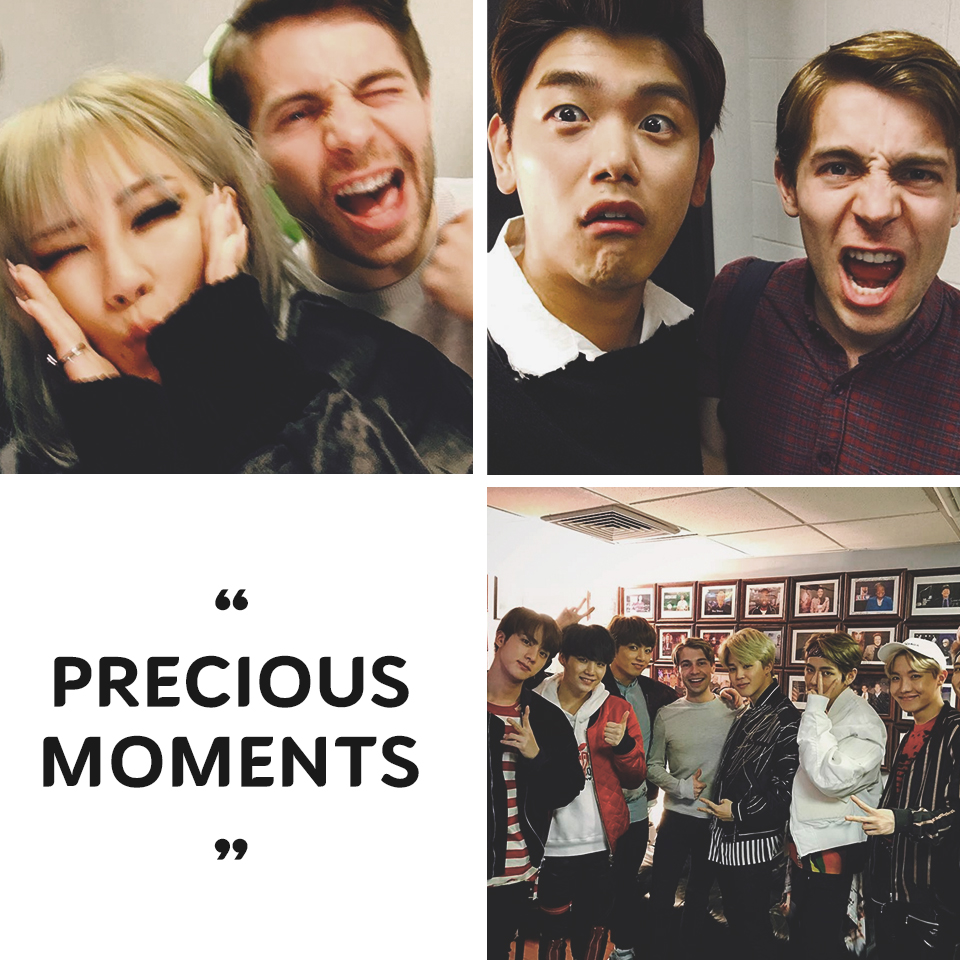 When I visited Korea with a group of reporters and visited 'M Countdown', Monster X recognized me. This was another good memory. I was going up some stairs with other reporters, the members of Monster X went by, and Min-Hyuk, a member of the Monster X recognized me and said, "What are you doing here? You are a really famous guy!" I shook hands with the rest of the members and exchanged greetings with them. After that, the manager of Monster X came and told me that the members wanted to have some time with me once again after their recording session. As can be expected, other reporters posed for photo shoots with the members and formed lasting memories. I will not soon forget the kindness of the Monster X members at that time.

On social media, I remember a conversation with Jung Yong-Hwa. I wrote a review of a CNBlue album on Billboard, and Jung shared the review with others, saying, "Professionals can tell professionals from others." I sent a personal message to him that I liked his message and I received the reply "You are real" from him. It was very meaningful to hear these words from artists like Jung who are recognized in various fields.

This year, KCON 2017 NY produced great results in many ways. First, the event featured a colorful lineup of veteran musicians, rookies, male and female groups, and solo artists in harmony. I think this kind of diversity is the reason why KCON 2017 NY drew the largest number of audience members this year. It was also noticeable that various vendors and booths had increased. Personally, KCON.TV’s interview with me is very memorable. KCON.TV requested an interview with me and those who read my stories wanted to ask me their questions. It impressed me and made me feel honored. I am still grateful for that interview. It was incredible. I wish I could have such an experience again.

What is the difference between
KCON 2017 NY and previous KCONs?

The most striking difference is that all of the artists evenly received support this year. In the past, many fans had been attracted to headliners or to specific artists only, but this year, the crowd felt that they were going to cheer and show support for all singers. From TWICE to HIGHLIGHT to NCT127, every time an artist took the stage, cheers came out from the bottom of fans’ hearts. It was a very positive experience.