With its big impact on viewers' lifestyles, K-Drama is a new cultural phenomenon that is expected to be more powerful in the future than now.

The performances of various actors and
production crews with new visions lead us to have heightened anticipation for K-Drama in the future.

tvN and OCN completely transformed the landscape of K-Drama. K-Drama, which had difficulties in meeting the tastes of more demanding viewers with the same old structures of rehashed productions, innovatively evolved via tvN and OCN dramas such as deep reflections on genre dramas, endless efforts for cinematic visuals, and creating empathy through trendy materials.
K-Drama, possessing both quality and a fun spirit,
is growing with its high ratings and enduring hype and
is pioneering a new futurewith a greater impact.
It can be said that the future of K-Drama is brighter than
ever before thanks to viewers who lead the spread of
this craze, actors exuding various charms, and
professional staff with fresh perspectives such as
writers and producers. 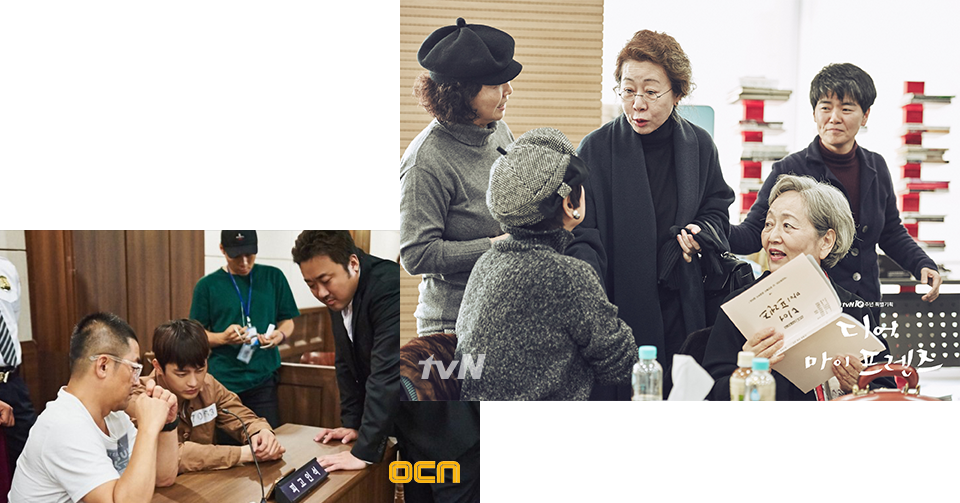 The K-Drama scene that is currently seeking
to catapult itself to global audiences. Veteran actors take K-Drama
to the next level.

Actors have significantly contributed to K-Drama's solid structure and explosive popularity. The K-Drama craze was initiated by Gong Yoo and Lee Dong-Wook in < Guardian: The Lonely and Great God > and Park Bo-Gum and Ryu Jun-Yeol in < Reply 1988 >, and Eric and Seo Hyun-Jin in < Another Miss Oh >, Jo Jung-Seok in < Oh My Ghostess >, Seo In-Guk in < Reply 1997 > and < High School King of Savvy > and Im Si-Wan and Byun Yo-Han in < Misaeng > among others. An interesting fact is that these actors made headlines with totally new characters by way of these dramas. Ryu Jun-Yeol and Byun Yo-Han rose to stardom through < Reply 1988 > and < Misaeng > respectively. Seo In-Guk, Im Si-Wan and Park Bo-Gum became stars through these dramas.

tvN and OCN dramas actively used actors with strong acting skills who were active mainly in movies, while leading popular idol star actors to adapt to new characters through new perspectives and viewpoints. If Yoo Ji-Tae and Jeon Do-Yeon in
< Good Wife >, Kim Hye-Soo in < Signal >, and Go Hyun-Jung in < Dear My Friends > are examples of the former, examples of the latter are Yook Sung-Jae in
< Guardian: The Lonely and Great God >, Hye-Ri in < Reply 1988 >, Im Si-Wan in < Misaeng >, Nana in < Good Wife > and Hoya in < Reply 1997. > The former
guarantee the consistent quality of K-Drama and the latter promise the creative viewpoints of and explosive responses from K-Drama. The performance of these various actors is the driving force behind the continued growth of K-Drama
with fresh materials and good quality. 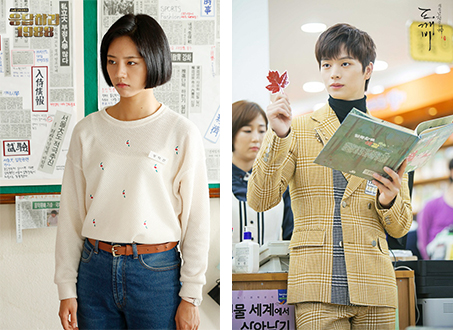 The rise of young actors

Idol actors have a big influence on K-Drama’s power.

The most important factor in creating the craze of K-Drama was the development of genre productions using various materials and flawless productions known as ‘well-made dramas’. On top of that, new writers and producers have played a big role in this case which could be called a new wave. tvN and OCN are improving the quality of their dramas with a precise production system and thorough direction like films. Writer Kim Eun-Hee of the TV drama < Signal >, said to be better than average films, is called ‘the master of genre’ and has created the ‘Signal craze’ with a compact story composition and charming characters. Kim Won-Seok who directed < Misaeng > and < Signal > transformed good scripts into nearly perfect direction and productions. Kim, possessing a great insight into life, created realistic characters and appealing story structures by paying attention to details, including pens and Post-It notes on a desk.

tvN and OCN are seeking to uncover new talent to deal with trends with totally different perspectives from existing writers and producers as part of their efforts to reach out to young people.

Producer Shin Won-Ho and writer Lee Woo-Jung, who received glowing feedback via the < Reply > series, paradoxically demonstrated how important planning is in production of dramas as they had worked for variety show programs. Producer Yoo Je-Won is also pioneering the romantic comedy genre in K-Drama through the brilliant direction of < High School King of Savvy > which reflects the double life of a high school student, < Oh My Ghostess > which details the love between a man and a female ghost and < Tomorrow with You > that depicts a time traveler’s special romance.

In addition, the future of K-Drama is being created by writer Kim Eun-Sook, who created a range of analects through the < Guardian: The Lonely and Great God, > and Noh Hee-Kyung who told stories about getting older with < Dear My Friends > and writer Song Jae-Jung, a former sitcom writer who showed her unique and powerful imagination through < Nine: Nine Times Travel. >

In this environment, tvN and OCN are endeavoring to expand the domestic drama market by nurturing and supporting new writers. They are aiming to expand their influence over the global market through drama planning and production with excellent global partners. They also strive to enrich the lifestyles of various domestic and international viewers.
CJ wants to facilitate a new lifestyle in various aspects of life. K-Drama not only serves as entertainment medium that brings joy and energy to people’s lives, but also play the roles of a new value messenger by looking at things that are familiar and natural from totally different perspectives and respecting various values. 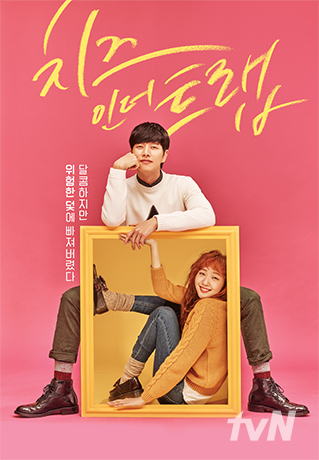 Producer Lee Yoon-Jung of < Cheese in the Trap > plans to participate in O’PEN to discover new writers as a director of a single-act drama. 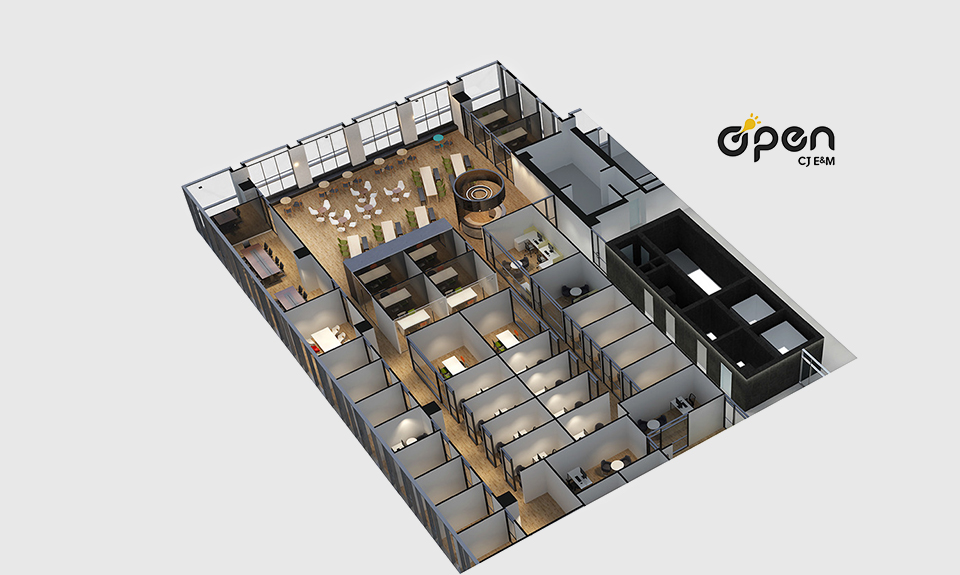 A bird’s-eye view of the O’PEN Center,
a project to nurture and support
new dramas and film writers

One good example is O’PEN. This past January, O’PEN was launched to support the debuts of young writers who will lead the future of dramas and movies. O’PEN offers a creative work space and opportunities to those who dream of becoming writers. CJ will support students throughout the whole process from new writer recruitment, script planning and development, video production, organization and business matching. In addition to simply discovering new creators, this new initiative causes people to build anticipation for the future of dramas and movies as O’PEN supports production, organization, and debuts of their productions as one-act dramas.

K-Drama will steadily rise in prominence and spread more widely, affecting consumers’ lives as a cultural phenomenon that transcends dramas by taking into consideration the lifestyles of consumers which are rapidly evolving.

K-Drama is no longer mere entertainment but a cultural phenomenon.
And CJ can be found at the center of the future.

K-Drama has become a cultural phenomenon beyond entertainment. CJ can be found
at the center of the future.