YOUR STORY,
YOUR DRAMA

K-Drama, which presents a variety of subject matters and genres such as well-made genre dramas, new types of fantasy dramas, reality romance dramas, and US drama-like series, is causing syndromes around the world.

K-Drama based on various subject matters
and genres, is loved by all generations from
teenagers to those in their 70s.

Watching K-Drama on a daily basis?
K-Drama that has captivated viewers around the world

When you go to Hong Kong subway stations and ride subway trains, you can see many images of K-Drama’s hottest actors such as Park Bo-Gum, Song Joong-Ki, Lee Dong-Wook, Nam Joo-Hyuk and Lee Jong-Suk. They are TV channel advertisements which introduce TV shows that they starred or are starring in. In particular, shows from tvN, which celebrated its 10th anniversary last year, make history by breaking records at home and abroad. The last episode of < Reply 1988 > recorded the highest-ever ratings of tvN dramas, when its highest ratings hit 21.6%. It was not long before < Guardian: The Lonely and Great God > broke the record with 22.1%. Beginning from the early days of the drama, < Guardian: The Lonely and Great God > made headlines as it was exported to Southeast Asia and the Americas.

< Guardian: The Lonely and Great God > which made headlines with its fashion and locations

Of particular note in Japan, the drama sold at 230 million won per episode, retriggering the Korean Wave in that country which had weakened somewhat. < Another Miss Oh > a new melodrama, was sold not only to Hong Kong, Taiwan and Japan, but also to the United States, Europe and Israel, creating a worldwide craze for K-Drama. tvN and OCN dramas which show various subject matters and genres are loved by all generations from teenagers to 70s from productions reflecting concerns affecting today’s youth and young adults such as < Cheese in the Trap > and < Drinking Solo > to genre dramas such as < Missing Noir M > and < Voice > and productions about the lives of seniors such as < Dear My Friends >.
K-Drama is creating a new culture in the daily lives of people around the world while going beyond borders.

Everybody has their favorite TV dramas. Unlike a movie that makes a strong impression through a single screening, a TV drama that is aired every day for a few months will have a lasting impact on our lives. Dramas reveal stories about people’s lives. Drama characters live and breathe and talk to us and what they wear, eat and hear and places that they visit are naturally absorbed into our lives.

A K-Drama fever grips viewers all over the world. Such viewers also listen to the soundtracks of Korean dramas, eat food shown in them, and covet the clothes that actors and actresses wear. K-Drama, like a gift set, affects their lifestyles beyond borders, languages, and cultural differences. As a foreign fan of K-Drama said, “K-Drama is full of good stories, actors, videos and music.” The reason why people around the world are interested in fashion, music, food, and the atmosphere that make up K-Drama is that those factors affect the feelings and emotions of characters and trigger empathy with viewers. It is because people are interested in the food that Koo Dae-Young (Yoon Doo-Joon) and Baek Soo-Jin (Seo Hyun-Jin) eat in < Let’s Eat >, because the food is symbolic in revealing a mutual understanding between the two who get to know each other. The reason why people are crazy about Kim Shin’s (Gong Yu) clothes in < Guardian: The Lonely and Great God > is that it is a factor that shows the sophistication and maturity of the goblin who has lived for a long time. Food was a symbol for revealing the evolving
relationships of the main characters.

Music video of Chanyeol and Punch’s ‘Stay with Me’ 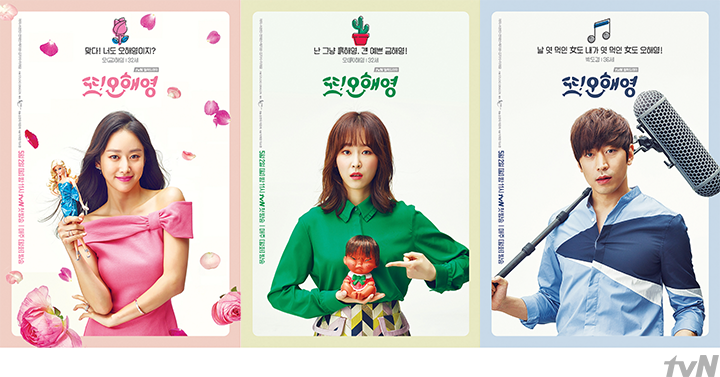 Particularly, tvN and OCN took the lead in coining a new term of “Korean dramas like American dramas.” The two channels created an era of well-made new genre dramas with forensic, detective and legal dramas, iconic ones of which are < Signal >, < Nine >, < Quiz of God >, < Special Affairs Team TEN > and < The Good Wife > Also in the melodrama sector, the two generated new genre flows by producing reality romance productions such as < Another Miss Oh >, < I Need Romance > and < Marriage, Not Dating > and fantasy-like romance productions such as < Oh My Ghostess >, < Guardian: The Lonely and Great God > and < Queen In-hyun’s Man >.

While English-language dramas treated fantasies as part of the thriller, horror or occult genres, K-Drama turned them into romance dramas for everyone through taking a more humorous approach. On top of that, K-Drama has been continuously interacting with viewers by planning series such as the < Reply > series and the < Rude Miss Young-Ae > series which will start its 16th season soon like American and British drama series. K-Drama has evolved into new types by way of undergoing comprehensive changes. The new tastes and preferences of domestic and foreign viewers were satisfied by K-Drama which immediately applies current trends into productions. K-Drama fulfilled its roles as a barometer of the troubles of our time and as an entertaining tool which forms a consensus of the times. Some examples are < Let’s Eat > and < Drinking Solo > which reflect the trends of drinking alone, dining alone and eating shows kindled by an increase in single-person households, < Cheese in the Trap > and < Because It’s the First Time > which reflect the real problems of the younger generation such as getting jobs and relationships and < Misaeng > and the < Reply > series which impugn the inequality of people in terms of social structure. K-Drama embodies CJ’s core values to create a new culture by taking trends of the times into consideration and enable the culture to have a positive impact on people’s lives.

Now, people do not watch dramas but create a culture through dramas.

K-Drama carries CJ’s philosophy
to turn everything in our lives into culture.