The MAMA united people as one

Asia's largest music award ceremony, the 2016 MAMA, was held in Hong Kong on December 2 (Friday). As many as 11,000 K-Music fans from all over the world packed the theater. At the same time, the 2016 MAMA was broadcast to 45 countries on five continents - Asia, Africa, America, Oceania, and Europe.

Our dream is that all of you in the world
become one through our music
BEYOND [MUSIC], MUSIC MAKES ONE

Intro A strong kickoff of the MAMA

This year, CJ has held various cultural festivals around the world such as the KCON, and the MAMA is creating a new and trendy culture in food, styles, movies and music through a global music festival that will bring 2016 to a close. In particular, through this MAMA, CJ sought to provide an experience where music fans from all over the world could become one through music. Preparing the MAMA with excitement

A pleasant atmosphere with excitement and tension gripped the Asia World Expo Arena in Hong Kong, where 2016 MAMA was held. The sensational MAMA poster also stirred up a sense of anticipation in many people.

The opening performance of Part 1 of the MAMA was held and was a collaboration involving GFRIEND and SEVENTEEN which who emitted their refreshing charms. Their performance was followed by performances by Korean popular hip hop musicians Zico, Dean and Crush. As soon as the second part began, Korea's male idols including GOT7, Monsta X, and NCT 127 carried out collaborative performances, captivating female audiences. After that, singer-songwriter Lee Juck graced the stage, which started with narration by actor Kim Yoo-Jung, was harmonized with AR technology and a bandonion performance, leaving audiences with a strong impression.

On top of that, Leon Lai, Darren Wang and Wu Ying Jie, popular in Chinese-spoken regions, made the event even more meaningful by handing out prizes. Of particular note, world-renowned music artists Gallant, Timbaland and Wiz Khalifa put on legendary performances. Gallant sang ‘Weight in Gold' with artistic vocals and deep emotions. Timbaland first performed 'Body' with Eric Nam, drawing much attention. Wiz Khalifa, famous for 'See You Again,' from the movie soundtrack for "Furious 7", gave an impressive performance as if to rewrite MAMA's history. 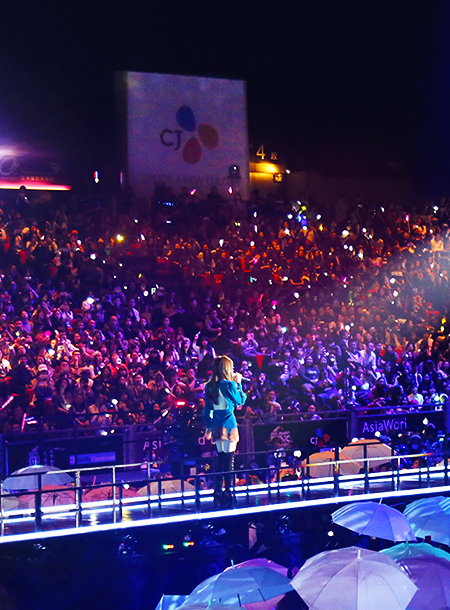 The special stage of the MAMA

The 2016 MAMA allowed music lovers realize how special a moment it was for everyone to share the same feeling.

Our dream is to deliver value to
those around the world that transcends experience
BEYOND [MUSIC], MUSIC MAKES ONE