The Journey into China that CJ is Pioneering

Recently, China is seeing rising awareness of safe food as a result of the growing power of female consumers, and the rapid growth of the middle class is also resulting in the increasing demand for leisure culture, spurring a 'fun' sense of consumption.
In this situation, the growing popularity of K-Culture is leading to new interests and demand for industries related to watching, eating and having fun, providing new growth opportunities to CJ brands who suggest a lifestyle for "food, leisure, beauty and fun" based on K-Culture. 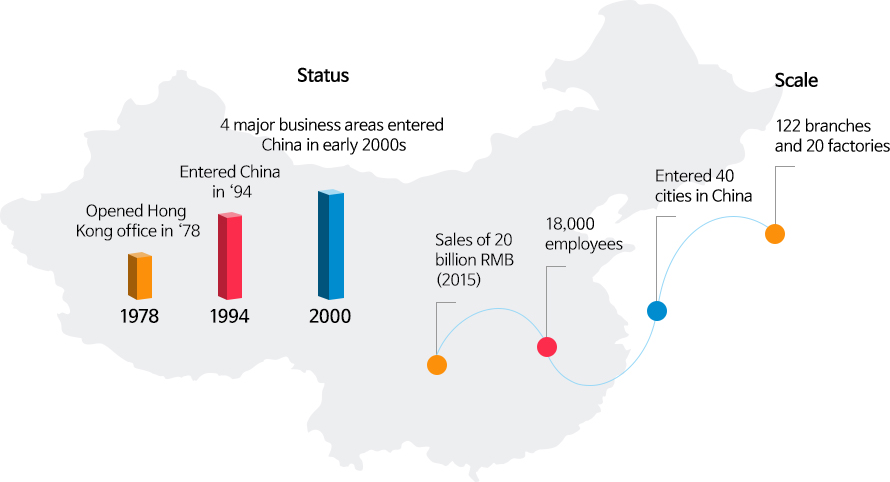 Leisure + Fun
Spread of 'Fun' consumption --- Happiness in the CJ

With the growth of local satellite television and the popularization of internet and mobile, the consumption behavior of Chinese people are also changing.
The sensation of the television series < Descendants of the Sun > and < Cheese in the Trap > and K-Music has also been led by these media and new consumer groups consisting of Balinghou (born in the 80s) and Jiulinghou (born in the 90s).
These new consumers (born in 80s and 90s) who enjoy informed shopping based on their taste through the internet and social media are a "trusted allied army" to CJ who suggests a converged shopping and restaurant culture linked with K-Culture.

Under the vision of unveiling the future of cinema, CGV is presenting a cultureplex

CGV is leading the lifestyles of Chinese viewers in cinemas by providing various promotion and discount events and seat selection service with its innovative and differentiated cinema space.

CGV has grown as the multiplex
most beloved by 1.3 billion Chinese people
in only 11 years after the opening of its first cinema
in China in 2006.