The growing K-Culture in China K-Culture is built on the framework of drama and music, embodied with fashion and beauty, and completed with food and lifestyle.

What is with all the growing interest and demand for K-Drama, K-Music, K-Food and K-Style in China?
Is it a culture?

K-Culture in China started with Korean dramas being aired in Taiwan in the mid-90s. The growth of the satellite TV industry in Taiwan led to a boom for imported high-quality television programs at that time, and K-Dramas, which were more cost-effective than Japanese and American television series, hit the market, spreading to the entire Great China region. As more and more 'youkes' visited South Korea in the late-2000s following the mega-hit of Korean television series < Dae Jang Geum > in China, a Korean culture boom was triggered known as Hallyu, and with the spread of internet and mobile in the lifestyles of young Chinese consumers since 2010, K-Music became a topic of interest among them.
As Jiulinghou (born in the 90s), who tend to march at their own drumbeat in their consumer lives and who have since become a major consumer group in China, K-Culture is now developing beyond simply watching and enjoying to eating and wearing, or K-Food and K-Style. Another factor behind the spread of K-Culture is that K-Culture is an endlessly evolving culture rather than a fixed one.
K-Drama is the result of many efforts to adapt production to the rapid growth of web and mobile users (web series, real-time simultaneous broadcasting by completing the production of all episodes before its premiere), while K-Music is the result of the loyal fandom and efforts to draw parallels by discovering local stars. In addition to them, emotional connectedness also contributed to making K-Culture a mainstream culture capturing the hearts of Chinese viewers despite many regulations put in place by the Chinese government.

Pao Chunran, a Hallyu expert said, "These days, viewers don't want mysterious and 'heavy-handed' celebrities anymore but they want celebrities who associate and exchange with them, and Korean television shows and stars meet such needs." He pointed out the emotional affection with viewers (fans) based on Confucianistic emotion as the best strength of K-Culture. 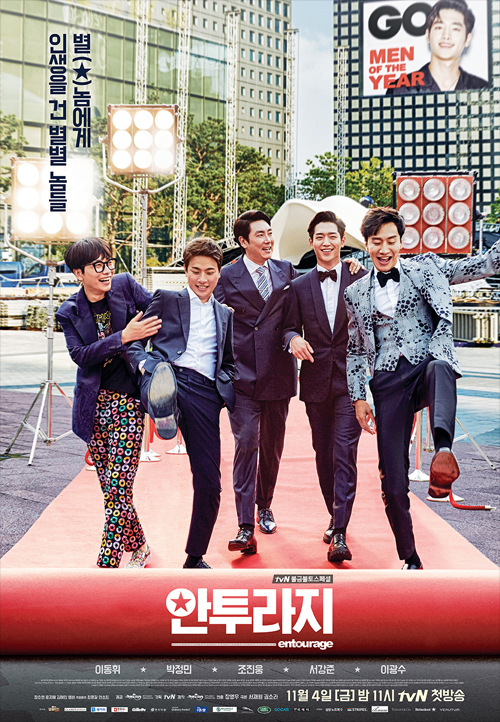 tvN's < Entourage > is expected to depict the K-Lifestyle through K-Drama.

The series is receiving tremendous attention even before its premiere thanks to its fantastic casts including Seo Kang-Joon, Cho Jin-Woong and Lee Kwang-Soo, the completion of the production of all episodes before its premiere and the simultaneous airing in South Korea and China.

Not only was the television series < My Love from the Star > enormously successful but it also created a neologism - the Cheon-Song-Yi-nomics (economic ripple effects derived from the heroine of the series Cheon Song-Yi, including Cheon Song-Yi style), causing fans to follow the fashion style (lipstick/fashion) and lifestyle of the heroine of the series. This phenomenon appeared again with the sensational < Descendants of the Sun > early this year. In particular, young women who fell in love with the actor Song Joong-Ki from the series called themselves Song Taitai (Song's wife). tvN's < Cheese in the Trap > was hotter in China. The series was aired on Youku, China's largest online video site and made a boom by topping the chart of the site.
The < Cheese in the Trap > sensation was deemed to have proven the power of K-Drama once again in that it made a huge success despite the tightened regulations of the Chinese government. The success factors of the series include its fresh planning with the genre of romance thriller and storyline focus on web and mobile rather than terrestrial or satellite television, which is now under tightened regulations, and the degree of completion improved by producing all episodes before its premiere and concurrently airing in both South Korea and China during the same period. tvN's Friday and Saturday night special series < Entourage > starring Seo Kang-Joon and Lee Kwang-Soo (premiere on Nov. 4, Friday at 11:00 PM) will also air simultaneously in South Korea and China, receiving tremendous attention even before its premiere. It is a remake of a popular American television series that aired for eight seasons. The new series is receiving attention in that it deals with the lifestyles of Korean celebrities loved by Chinese people.
tvN's television series < Reply 1988 > and < Signal > also received as much popularity as in Korea with their fresh planning and well-plotted story, and Korean dramas are becoming the center of K-Culture, being recognized as a genre aptly known as ‘K-Drama’.

Unlike K-Drama that has made an explosive sensation, K-Music has continuously expanded its base in connection with its loyal fandom, forming another mainstream culture in China. More recently, however, one K-Music star is causing a sensation in China like K-Drama.
The hero is Hwang Chi-Yeul who shot to stardom in China through the Chinese version of < I Am a Singer >. As the only foreign singer in season 4 of the show, Hwang ranked second in the competition thanks to his excellent singing ability and stage manner. He is solidifying his position as a Hallyu star, appearing even in China's most beloved television show < Happy Camp >, which garnered a lot of attention especially when Song Joong-Ki appeared in the show. No doubt he is the hottest Korean star leading K-Music: he has more than five million followers on Weibo, a Chinese social media platform, and his single recorded sales of 100,000 copies in just 30 minutes.
The sensation of Hwang is deemed to be attributable to his handsome face and refined style, powerful dancing and performance and fabulous singing.
One of the secrets why he was able to successfully introduce K-Music to the world is that he utilized digital media so well. Hwang revealed his everyday life via the Naver V app or other Chinese live apps, showing the unique characteristics of K-Music by emphasizing communication with fans.

The Hwang Chi-Yeul sensation that capitivated the Asian continent through his excellent singing ability and attractive persona is said to be another power of K-Music.

MAMA is now a global music festival
Hosted by Mnet, MAMA (Mnet Asian Music Awards) is now a global music festival stretching beyond Asia. Marking its sixth anniversary this year, MAMA was first held in Macao in 2010, then in Singapore and Hong Kong, providing fans with opportunities to meet and communicate with their K-Music stars. The show is evaluated to double the joy of K-Music with its cutting-edge sound systems and stage presentation. This year's MAMA, under the theme "Connection", will be held at the Asian World Expo Arena, Hong Kong on December 2, and will present a more diverse range of stages linking the virtual world and the real world. "We will present a compelling show by actively leveraging our system knowhow and infrastructure," said Shin Hyeong-Gwan, Music Contents Division Manager of CJ E&M. Since 2014, MAMA has supported small and mid-sized enterprises who wanted to enter the global market by combining the performance and convention functions. It invites promising companies in the fields associated with Hallyu, such as beauty, fashion and innovative commodities and provides them with comprehensive support to help them sign export contracts and advance into the global market. 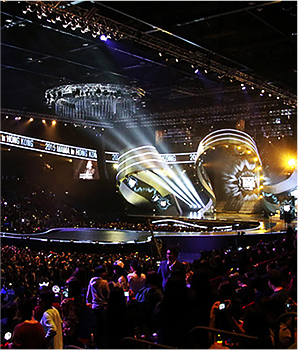 The 2015 MAMA in Hong Kong presented fantastic stages created by convergence between technology and arts.

Bibigo, where you can enjoy a variety of K-Food menu selections in premium interior space, and Tous Les Jours, which introduced a juice bar to meet the needs of Shanghai customers for extracted juice with bakery and various F&B brands are captivating the taste of Chinese customers.

As more and more Chinese people want to experience K-Culture, export of K-Food is also growing at a CAGR of over 20%, forming a new hot trend. Korean dishes introduced as a result of the popularity of K-Dramas such as < My Love from the Star > and < Descendants of the Sun > are continuously gaining in popularity. The sales of samgyeopsal, ramen and tteokbokki, which frequently appeared in < Cheese in the Trap >, ensuingly became popular in China amid a webtoon series boom, as well as Korean entertainment shows, and also rose by up to 60% in the past two years, captivating the taste of Chinese consumers.
With the growing awareness of K-Food as a functional food, the sales of food ingredients such as Korean condiments also rose to a large extent. As for the popular Korean condiment "CJ Dashida", its consumer awareness soared from 11% in its first year in China in 2007 to 60% last year, posting second place in market share (22%). Bibigo is also faithfully playing its role as an ambassador of K-Food with its five global strategic products, including frozen dumplings, sauces, kimchi and Hatban (cupped rice).
Enthusiastic efforts made by food service enterprises such as CJ FoodVille and E-land for globalization are also contributing to creating a K-Food boom. Being part of cultureplexes in the downtown cores of Beijing and Shanghai, where you can enjoy both nice restaurants and movies, CJ FoodVille's "Tous Les Jours", "Twosome Coffee" and "Bibigo" are creating a K-Food lifestyle boom.
Franchise restaurants and cafes which often appear in K-Dramas are an attraction in China, and even buffet restaurants (for example, “VIPS”), which are not familiar by Chinese consumers, are as popular as in Korea thanks to the popularity of K-Culture in China.

What K-Food do Chinese consumers love most?
According to a report on the most loved K-Food in China by the Shanghai branch of Korea Tourism Organization, Korean BBQ, including samgyeopsal, topped the list, followed by samgyetang (9.9%) and fried chicken (9.5%), and the result of a survey by Taobao Mall, China's largest shopping mall, conducted early this year, showed that ramen dishes ranked first through tenth (particularly Fire Chicken Noodles had great popularity), and that other popular items included tteokbokki, dried laver, naengmyeon (cold noodles), and dumplings. As Chinese people like sweet flavors, sweet items, such as honey butter almonds, Korean candy gift sets, biscuits and kimchi, Korean sauces, beverages containing solid ingredients and Maxim coffee, are also popular. 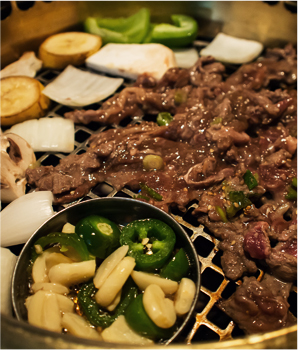 The most favorite K-Food of Chinese people - Korean BBQ

Leading to K-Culture
and K-Style

Sparked by Korean dramas, the interests of Chinese people in K-Culture are expanding from music, film and entertainment to every aspect of lifestyle, including fashion, beauty and food, generating more and more K-Style followers.
Influenced by K-Drama and K-Music, the Korean words "Oppa (term of endearment)" and "Saranghae (I love you)" became a vogue word in China as they are often used in Chinese advertisements and music videos, and Chinese businesses often use images of Korea in their advertisements with the growing awareness that Hallyu makes money. 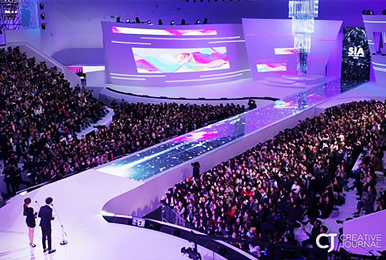 K-Beauty items and broadcast programs representing K-Style have become the most representative category of K-Culture that excites many smart sankes and wang hongs in China.

In particular, the tendency of enjoying and experiencing K-Style more actively among Balinghou (born in the 80s) and Jiulinghou (born in the 90s), who are familiar with internet and mobile, is leading to the creation of a new shopping culture.
KCON, an event combining K-Music performances and exhibitions, is packed with Hallyu fans, who saved their pocket money over months to buy tickets, and there is a growing number of "smart sanke" who tend to enjoy informed shopping using their smartphone and "curation shopping" by "wang hong (one-person broadcast BJ or creator or power blogger)" is already a distinct trend.
Chen Qi, CEO of Meili, which runs China's famous online shopping platform Mogujie, said that the company's survey on the 12 most influential stars to Chinese consumers revealed that four Korean stars (Yoon Eun-Hye, Park Shin-Hye, Victoria, and Yoona) were included in the list, and said, "It is true that they looked attractive to consumers, but it's the wang hongs who enabled the style of these celebrities to stand out and become popular."

K-Culture is evolving into a culture where a 1.3 billion-strong Chinese population enjoys watching, listening and eating.
The evolution is under way even at this moment!

Going beyond a simple trend,
K-Culture is being recognized by
1.3 billion Chinese people
as a culture.