The "most delicious" 2016 O’live Food Festival was held in Busan, the city of delicacies, from September 2 to 4.
The festival revealed diverse cultures and new approaches to K-food, taking a bold step toward becoming further recognized as a global cuisine. 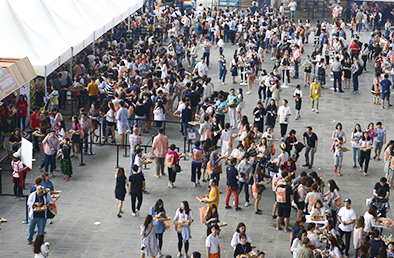 2016 O’live Food Festival held in Busan,
the city of delicacies

The festival was crowded with over 50,000 visitors from Busan,
Seoul, Pohang and many other regions across the nation.

2016 O’live Food Festival
is considered to have expanded
the potential of worldwide K-food.

2016 O’live Food Festival,
the beginning of a new culture of delicacies

In its fourth season, 2016 O’live Food Festival came to an end, creating a new culture of delicacies. Starting with the evening show "Delicious Table" on September 2, the festival infused energy into Busan, the city of delicacies, for two days from September 3 to 4. All 250 tickets of "Delicious Table" sold out, and especially "early bird tickets" sold out within two minutes, and online tickets also sold out. The Busan Cinema Center, the venue of the festival, was packed with over 50,000 visitors who came from Busan, Seoul, Pohang, Geoje and many other cities to experience diverse food cultures. Eating food products of bibigo
is a simple and easy way of enjoying K-food.

What makes 2016 O’live Food Festival special is that it was an innovative "foodtainment" festival combining food with entertainment elements, such as concerts and cooking shows, rather than simply introducing food culture. This allowed visitors to experience various food cultures in a more friendly way. Chef Sam Kim cooked paella, the famous Spanish dish, together with the audience, using fresh seafood from Busan, and celebrity chefs from O’live Show 2016, such as Choi Hyun-Seok, Oh Se-Deuk and Chae Nak-Young, presented a cooking battle show and also responded to various questions from the audience, making Delicious Talk even more scrumptious. In line with the new concept of the O’live Food Festival, the food concert by Hong Yoon-Hwa, Yoo Jae-Hwan and Kim Poong and the concert featuring artists including Eric Nam, Urban Zakapa and Blue Paprika were well-received by the audience. Most of all, it is notable that this year's O’live Food Festival expanded the potential of worldwide K-food. 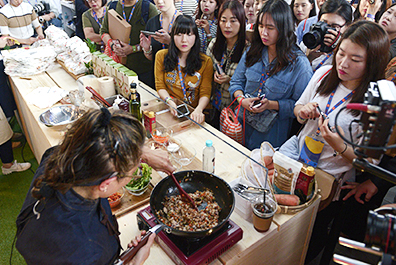 Under the theme "Delicious Busan", this year's O’live Food Festival was prepared for visitors to taste nice food from Seoul and Busan in a single place. More specifically, the festival invited 20 trendy restaurants from those that appeared on O’live TV's "Tasty Road" as well as famous restaurants on social media so that visitors can vividly experience the most trendy food culture. The interesting part is that they were world dishes created by various ingredients and recipes. Visitors could experience foreign ingredients and recipes by tasting various new and unfamiliar dishes from all around the world, including Peruvian dishes that also suit the appetite of Koreans, such as ceviche and Peruvian chicken; to Danish dishes, which are on the rise thanks to the recent popularity of wholesome delicacies, such as smørrebrød and octopus roll; famous Spanish dishes such as squid ink paella and jamon; and American fusion dishes influenced by multiple cultures, such as shrimp burritos and sushi cake. This is also keeping with the direction of worldwide K-food; learning about delicacy trends and studying foreign ingredients and recipes that can be applied to K-food will unlock the endless potential of K-food.

Two sisters, Park Hye-Jung and Park Geon-Hee, and their friend Adam Odi, who came from Ulsan as O’live TV fans said, "This festival is a good opportunity to taste various kinds of global cuisine we would see only in media, including Danish dishes, in a single place." Adam Odi, an Englishman who says he loves Korean food, such as Andong jjimdak and gochujang samgyeopsal, said, "The UK also has these kinds of food festivals and I came here out of curiosity and I found it to be great. My friends in the UK all like Korean food. It will be nice if O’live Food Festival can introduce more various Korean dishes." The festival also introduced foreign visitors to the simplest and easy way of enjoying K-food through the bibigo truck. Now, foreigners who have interest in K-food can easily enjoy K-food anytime, anywhere through the Hatban Cupban series, such as Seaweed Rice Soup and Soft Tofu Stew Rice Soup, bibigo Thick Beef Bone Soup, and bibigo Spicy Beef Soup.

The audience enjoyed a new K-food culture through
the dishes created by Chef Sohee Kim.

The hottest program at the 2016 O’live Food Festival was "K-food, K-recipes by Chef Sohee Kim". Born in Busan, Chef Sohee Kim has introduced to Europe functional and stylish K-foods that emphasize the taste of ingredients. At the festival, she cooked "kimchi salad and mushroom fried rice" and shared the dishes with the audience. Kim underscored the potential of new K-food and K-recipes with the dish by combining red chili paste and kimchi with exotic ingredients such as rucola, basil and balsamic vinegar. She introduced her dish as "a fried rice with kimchi flavors" as kimchi is the base but not the main ingredient.

Some friends visited the festival again after enjoying last year's O’live Food Festival together. Bae In-Sook, Chun Nam-Ok and Lee Bin-Na tasted Chef Sohee Kim's mushroom fried rice with kimchi salad and said, "It was unique and delicious with herb flavors. As the chili paste and kimchi flavors were not overly strong, foreigners would be able to enjoy it." Chef Kim said she always goes to the market to find fresh seasonal ingredients. "K-food is popular because it is both delicious and functional." She emphasized again that the key elements of K-food are health, taste and plating. She said that she recently visited several temples in Korea to learn about temple cuisine. "There are lots of vegetarians in Europe for many reasons. Temple cuisine is good for vegetarians as it doesn’t contain any butter and sugar. I would like to develop temple cuisine that suits the taste of Europeans," she stated, suggesting that K-food can evolve in various ways in the future. In this way, the 2016 O’live Food Festival took a bold step towards enabling K-food to becoming truly global and can be enjoyed by people of the world through diverse food cultures and new approaches to K-food.

People of the world enjoy K-food
as their soul food. People of the world enjoy
and cook K-food.

Featuring fresh ingredients and wholesome and functional recipes as well as the style and taste of Korea, K-food is present not only in many restaurants around the world but also in the homes of people of the world.

"K-food is an impressive food for those who love delicacies.
Bibimbap is a delicious and beautiful bowl of nutritious food.
-Jackie Miao @dininghappy

"K-food always makes me feel refreshed and this is probably because of its fresh tastes and aroma."
-fawn swanson @fawnedness

Actually, functional, delicious and stylish K-food is causing a sensation in many countries around the world. A Twitter user (plsfollowme1d) expressed his/her love for K-food, stating "If you are searching for nice food, no doubt the answer is K-food." Another Twitter user (dandan_orenji) said, "I ate K-food as I want to take care of my health," emphasizing the functional taste of K-food. The world is paying attention to the elements that make K-food special, including side dishes accompanying rice, fresh ingredients including various vegetables, along with cooking processes such as fermentation and stylish plating. K-food lovers not only dine at nice Korean restaurants but they also cook and enjoy K-food at home.

Mika Button from Austin, Texas, says, "Since becoming addicted to K-food, I started to cook some dishes like bibimbap." As a Twitter user (wetcasements) said, "K-food is more than simply something that you put in your mouth. It is an addiction and a lifestyle.” There are actually many people on social media who say that their lives changed after first tasting K-food and that K-food is now their soul food. The deep taste of K-food created with meticulousness and sincerity is comforting the souls of many people around the world and making their lifestyles healthier. K-food is emerging as a
culture of delicacies in many cities
around the world.

As a soul food, K-food is creating a
healthy lifestyle for people of the world.

K-food is more than simply something that
you put in your mouth.
It’s an addiction and a lifestyle.