The appeal of K-Food

K-Food has never been hotter than it is now.
The deep taste, pursuit of health, and beauty contained in a bowl of
K-Food reveal its sincere care for diners. 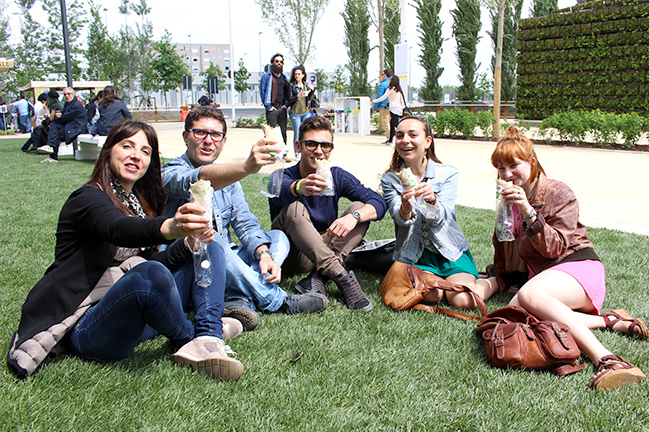 K-Food presented under the theme of "harmony, healing and health"

On May 22, 2015, CNN Today, a morning news show of CNN International, highlighted K-Food as a potential catalyst for the Korean Wave. Michael Holmes, anchor of CNN Today, said, "K-Food such as bulgogi burger and dumpling salad by CJ Cheiljedang perfectly suit the current global trend emphasizing healthy and functional foods." In addition, "Delicious", an Australian food magazine, chose bibimbap as a cover feature for its November issue, with the title of Asian Soul Food. "K-Food is currently the hottest thing at the moment," as said by Matt Preston, a senior editor of Delicious.

Some K-Foods such as Bossam presented by Korean American chef David Chang at his New York restaurant Momofuku, and Kimchi Taco by Roy Choi from his LA food truck "Kogi BBQ" are hit sensations in the U.S. In Chicago, “Parachute”, a restaurant run by Korean American Beverly Kim and her husband Johnny Clark was selected as Restaurant of the Year 2014 by Eater Chicago. Parachute serves Korean menu selections such as "Dolsot Bowl" and "Tteokbokki" customized to locals, which are evaluated as "the taste you can't experience in any other place". K-Food is also hot in Europe, with the popularity of bibigo proven at Expo Milano 2015 on food.

This trend is based on the heightened interest in K-Food derived from the popularity of K-Pop as well as the general trend of people preferring healthy and functional foods, such as slow food. Of course, the premium K-Food strategy also played its role, including "Jungsik", a Korean restaurant in New York run by chef Jung-Sik Yim that holds two Michelin stars, and "Danji", one-star Michelin restaurant by chef Hooni Kim. Most of all, CJ played an important role with its commitment to localization to communicate with global citizens through over 270 K-Food restaurants in 11 countries around the world, including bibigo. With its deep taste and functional ingredients and recipes and beautiful plating, K-Food is captivating the taste of people around the world.

K-Food is Tasty!
Deep taste can be found in a bowl of food

Roy Choi said about his Kogi Taco that contains kimchi and bulgogi in a taco wrap, "Once you take one bite, you can feel the 5,000 years of Korean history." He is true on this point as Lee Gyu-Bo, a poet from the Goryeo Dynasty era expressed kimchi making as "Kamji" in a book "Dongkukyisangkukjib" in 1241, and peppers, a major ingredient of kimchi, were introduced to the Joseon Dynasty in the early 1600s. What he really emphasized was his cooking philosophy of "honest taste, sincere effort and pleasure for making the best food". With the tradition of fermented food that requires a long fermentation process and side dishes, K-Food is characterized by its deep taste created from a long and dedicated development process.

The deep taste and sublime value of K-Food

In her book "Sim Young-Soon, A Bowl of My Precious Life", Sim Young-Soon, a K-Food researcher, said that what is the most important aspect in K-Food is "gratitude to nature and people" and a "noble mind to make every food, big or small, like the one for my family". Valuing the heart-warming taste of home-cooked meals just like Mom makes, Koreans consider being able to cook a meal for someone as being a valuable trait. Such kind-heartedness cause Koreans to do their best in cooking even simple food, and as a result, such efforts led to the deep taste of Korean food. Chef Kim Sohyi, who presents original K-Food through her restaurant "Kim Kocht" in Vienna, Austria, cooks her cuisine based on her philosophy of "food is a delicious drug", recalling the nicely prepared meals from her mother who use to set five kinds of kimchi on the table just for two people. Using a variety of fermented and aged sauces such as red pepper paste, soybean paste and soy sauce, K-Food presents a wide range of tastes that people can feel, from bitter to spicy tastes. "Season's Table", which serves various dishes like home-cooked meals made of fresh and seasonal farm products, delivers the true deep taste of K-Food.

K-Food is Stylish!
A bowl of fun

K-Food brings delight to your eyes as well as your mouth. For centuries, our ancestors cared for even the color and shape of food with the idea that "a visually appealing rice cake is better to eat." This is why they decorated food with garnishes. K-Food is basically colored based on the color of natural ingredients. The basic five colors of garnishing are: red (pepper, jujube, carrot), green (pumpkin, cucumber, green onion, water parsley, garland), yellow (egg yolk, ginkgo), white (egg white) and black (mushroom, laver). These colors are based on the Five Elements theory that five elements consisting of the universe - wood, fire, soil, iron and water - were created as the result of interactions between yin and yang and that the harmony among them is the most important aspect. For example, garnishes on bibimbap of bibigo, which is growing as a wellbeing food for people of the world, are both functional ingredients that add to the taste of food and decorations that complete the beauty of food. 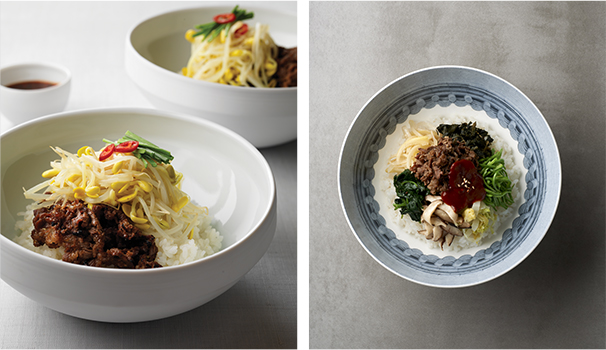 An aesthetic of beautiful harmony

Emphasizing harmony, K-Food underscores the pleasure of eating with your eyes.

A bowl of K-Food possesses harmony between humanity and nature and the belief that one can live a healthy life through it. The elegance of K-Food comes from the efforts to unite everything from harmony between nature and people to food, liquor and even bowl into a single aesthetic. What Cho Tae-Kwon, chairman of KwangJuYo, sought through the Beautiful Table Exhibition were also beautiful chinaware and premium foods and liquor appropriate for such chinaware. K-Food contains values that go beyond simply being something to eat. Providing deep and lingering tastes that deliver the philosophy of food through sincere processes, K-Food is a large bowl that contains a considerate heart for people. We call it a food full of soul, or Soul Food.