Cultural phenomenon started from the music

2016 Jisan Valley Rock Music & Arts Festival, which takes place on July 22-24 at Jisan Forest Resort in Icheon, is a place where different dreams come together and people can enjoy K-Music as a cultural phenomenon with an open mind. 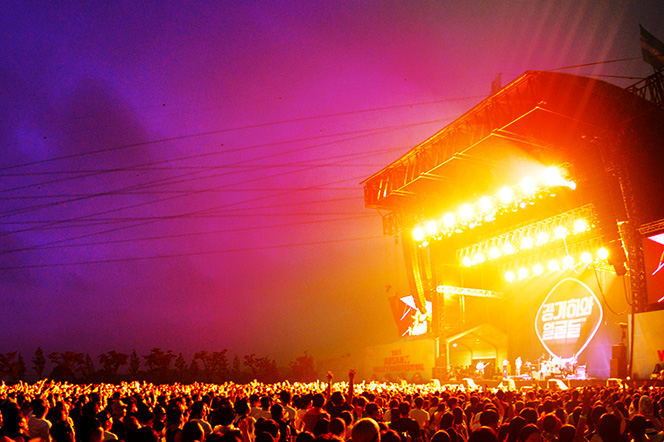 The way you can enjoy summer in the hottest and most cheerful fashion: Jisan Valley Rock Music & Arts Festival.

At the end of July, some people excitedly start to memorize song lyrics. And this is just to enjoy summer in the hottest and most cheerful fashion at Jisan Valley Rock Music & Arts Festival. Started in 2009, the festival is to be held at Jisan Forest Resort, a clean and cool place, opening a new page of rock music festival in Korea. Most of all, with its powerful line-up including top musicians worldwide such as Oasis and Weezer (which appeared once respectively), Massive Attack, Muse and Pet Shop Boys (twice), Chemical Brothers, Suade and Arctic Monkeys (three times) and Radiohead (four times), the festival has become Korea’s representative rock festival.

In particular, as Jisan Valley Rock Music & Arts Festival has been recognized as a popular festival that not only rock music fans, but also the general public can enjoy through its high accessibility and variety of music. It is expanding the culture of rock festivals. The seventh annual festival takes place at the resort in Icheon again in four years, and will be an opportunity where people can feel music and the arts in the cool and beautiful natural surroundings.

Shall we go to feel and enjoy the heat at the 2016 Jisan Valley Rock Music & Arts Festival where domestic and overseas top artists (RHCP, Disclosure, Travis, Lee Sora and Kiha & the faces, etc.) gather together!

This year’s line-up is also remarkable. Various popular pop musicians will come to Korea, including the U.S. rock band The Red Hot Chili Peppers famous for performing while only wearing socks during a previous concert rather than for its 33-year career, Discloser, nowadays the hottest electronic music group making people dance with its music, Travis and Stereophonics which debuted with their first albums in the same year (1997) respectively and now stand shoulder to shoulder as Britain’s top bands. Needless to say, Lee Sora, KimChangWan Band, Hyukoh, and Zico will also hit the stage at the Forest Resort.

Turn Up? Tune Up!

Apart from well-known artists, the festival also provides opportunities for young and talented new indie artists. As Johnny Marr, the guitarist of UK’s legendary rock band The Smiths, said “rock festivals are a fascinating opportunity, since you can meet new bands you’ve listened to but never seen”.

This may be more true for rock festivals where people can see new artists as well as celebrated artists in the same place. This place is also where artists can achieve and they realize their dreams together.

In 2012, music fans had lots of fun with the new and fresh performances of bands like The Black Skirts, Glen Check and Asian Chairshot a longside those of the big bands such as Radiohead and Deulgukhwa. In 2013, fans who came to see The Cure, Skrillex or Nine Inch Nails added songs of bands like Hurts or The Solutions to their playlists after enjoying their shows. Asian Chairshot selected as the 9th winner for CJ Culture Foundation’s musician support program “Tune Up”, will be on the main stage in this year’s festival to deliver its own rock spirit.

CJ Culture Foundation makes efforts to improve cultural power under the belief that culture can make a better world. Its Tune Up program considers the diversity of young creators as its most important value.

Especially in this year’s Jisan festival, the two bands selected to have support from the Tune Up program will give their all in their performances on the Big Top Stage, the biggest stage at the festival: the fifth winner Bye Bye Badman and the ninth winner Asian Chairshot. Bye Bye Badman continues to perform well and has even been invited to the world’s biggest music festival South by Southwest while Asian Chairshot won a domestic TV program's rock band audition. Both will deliver the heated rock spirit to the audiences in Jisan. Founded in 2006, CJ Culture Foundation has supported various creators based on its special programs helping young creators of popular culture, such as “Tune Up”, “Creative Minds” and “Project S”, and in the theater “CJ Azit”.

CJ Culture Foundation focuses on the subculture (indie culture) that will eventually enrich the public culture and gives support to the youths moving forward with their artistic dreams. CJ Culture Foundation makes efforts to improve cultural power under the belief that culture can make a better world. Its Tune Up program considers the diversity of young creators as its most important value. This shows why the program spares no effort to help new and indie musicians from various genres of music grow in their musical career by supporting them with record production, promotion and marketing, and providing performance stages.

Anyone who has a good sense of music should have kept an eye on the Tune Up Stage offered since last year at the Jisan Valley Rock Music & Arts Festival. This is specially set for the Tune Up winners, 13 of whom collaborated with well-known musicians including Hareem and Kim Chang-ki last year, receiving fervent responses from the audiences. On July 22-23 this year, nine musicians from the program are scheduled to perform tribute concerts with the concept of “R.I.P. Brothers: Sing for My Idol”. The concerts will be filled with reinterpreted songs of the greatest artists that died in 2015 and 2016. Here is the line-up: a post-hard rock band HarryBigButton, a garage rock band 24Hours, Hoochus with soft melody songs for the youths feeling blue, a rising pianist Meari Nam of the Korean jazz music, indie pop duo band Hugh Keice X Park Soyu, a power trio band Blue Turtle Land with their bluesy sound, an alternative rock band Nametag, and unique pop band Echae en Route. Plus, the Tune Up Super Band specially made of 12 members from seven teams (Asian Chairshot, Mahogany King, ABTB, CoreMagazine, Meari Nam, The Blocs) for the 2016 festival will also be on the stage, providing opportunities for audiences aspiring to fresh music to listen to a variety of new music. 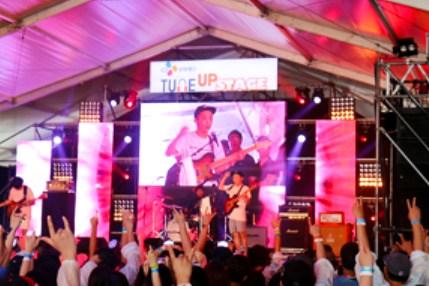 The heated Tune Up Stage of last year

The Tune Up Stage is set for the Tune Up winners to give them an opportunity to communicate with the world.

With their great performances, the 16th Tune Up winner Echae en Route will participate in KCON LA to show off the diversity of K-Music, following the Tune Up Stage in Jisan festival. 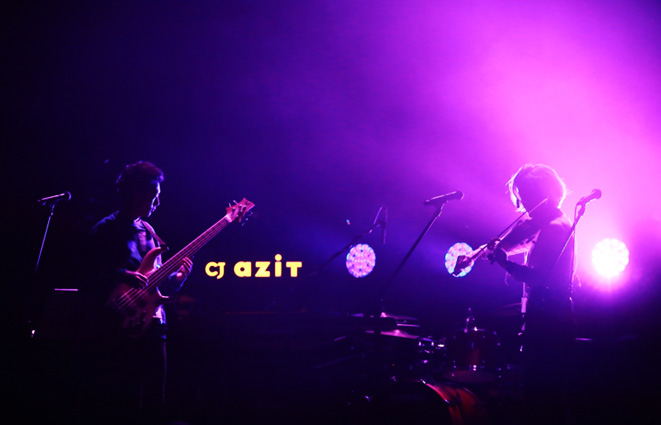 In particular, the 16th Tune Up winner Echae en Route with their unique combination of bass guitar and violin has already been recognized for their great performances as well as their album which has been nominated for the Best Pop Album at the 2016 Korean Music Awards. The band's song “Uneasy Romance” has also been included in the O.S.T album of the Korean TV drama “Another Miss Oh”. As already mentioned above, the band will participate in KCON LA, following their performance on the Tune Up Stage in the Jisan festival, to show off the diversity of K-Music to their global music fans, “We cannot define our music as belonging to any specific genre such as jazz or classic. The thing is we just play freely music instead of sticking to any limitations of style,” says the band, which helps them to communicate with their listeners in their own unique way. This is why people in the world are focusing on K-Music – and K-Culture. The Korean-culture convention and festival KCON LA will be held on July 29-31 in LA, U.S. to introduce K-Culture through fashion and foods as well as K-Music, and will contribute to the meaningful expansion of K-Culture. 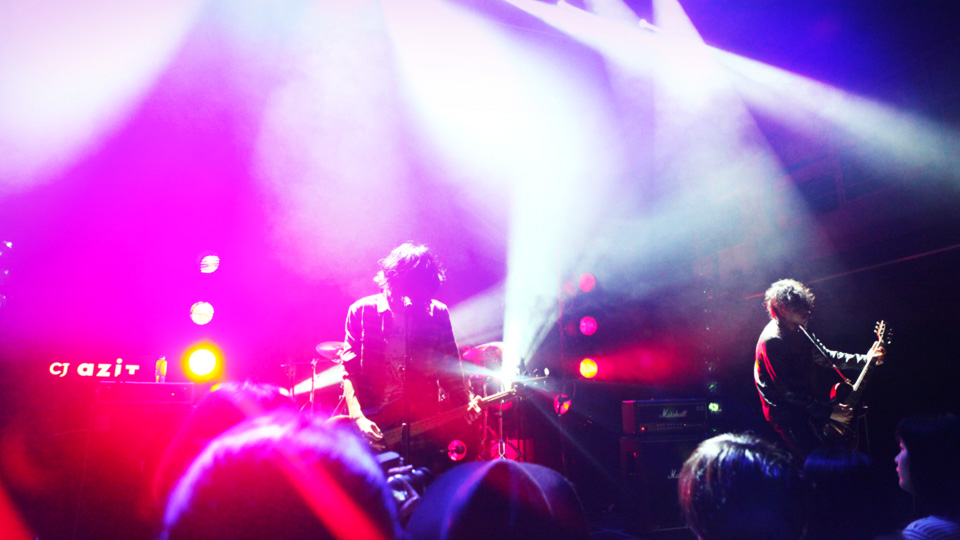 CJ Azit has been supporting subculture (indie culture) after opening a Gwangheungchang theater in 2009 and its Daehangno branch in 2016 by helping new creators perform on their own way.

The Jisan Valley Rock Music & Arts Festival helps people share their own different views, cultures and dreams after jumping over the fence of national borders and age. The festival is also a place for communication with its principle that anyone can have artistic dreams, can share and enjoy the arts, which when made this way, and are spread throughout the world. One of the sensational music bands Echae en Route and a composer/producer Dean aim to communicate with the world as they join KCON LA, following the Valley Rock festival. Young and vibrant musical energy will converge at the Jisan Valley Rock Music & Arts Festival and form a bridge between K-Music and the world. Young artists will make new dreams at the festival, and K-Music will be the dream for people in the world. Now, K-Music is a part of a cultural phenomenon beyond music alone.

We just play free and
new music instead of
being fixed to any limit of style.