K-Music, Connecting with the world via digital

K-Music has taken the digital world by storm. This is the story of K-Music’s connection to the world via digital media and the rise of the global K-Music fandom.

Type in “K-Music” into YouTube, and dominating the list of search returns will be K-Music reaction videos. The variety of emotional reactions K-Music incites has indeed become a phenomenon in itself. Watching Tae Yeon’s I music video, one British fan sheds tears, saying how the video helped to heal her wounds from the past. There is also a video of an American fan dancing along in delight while watching a clip of BTS in a dance rehearsal. Also popular are videos showing the reactions of Norwegians listening to K-Music for the first time. In his work entitled K-Pop: Emergence of Expression as a New Language of Criticism, cultural critic Kim Shin-sik announces K-Music review and reaction videos on digital media as a new mode of criticism and suggests that “This new language of criticism showing actual individuals expressing their thoughts and opinions in their own words has the potential to become the new voice of criticism.” There is no denying the popularity of K-Music grew explosively thanks to these K-Music review and reaction videos uploaded by fans from around the world. YouTube even has special series of videos called Americans Meet K-Pop and Norwegians React to K-Pop, and these user-created videos prove that K-Music is indeed a digital force demanding the reaction, attention, and interaction from its fans. Through digital media, K-Music has gained a global following and pushed its potential to new heights.

Source: Fomo Daily Youtube
The clips from "Americans React To K-Pop",
showing Americans' reactions to the music
video for "Fire" by Bangtan Boys, are exciting
examples of reactions to K-Music from abroad.

Optimized Music
for the Digital Age

Just how much influence digital media have on K-Music became apparent when Girls' Generation’s I Got a Boy music video won the Music Video of the Year award at the first-ever YouTube Music Awards in 2013. South Korea already boasted the highest mobile-device-adoption rate in the world at the time and embraced the digital era with open arms. The country succeeded in establishing K-Music’s legitimacy in the global music market, and, when Apple’s iTunes Store added K-Pop as an official category at the end of last year, the explosive surge in global sales of digital K-Music that ensued was proof positive of K-Music’s global reach and influence. Billboard even followed suit and introduced a monthly chart of the most viewed K-Pop videos. In May 2016, the most popular K-Music video on Billboard’s new chart was, at 34 million views, Fire by BTS. 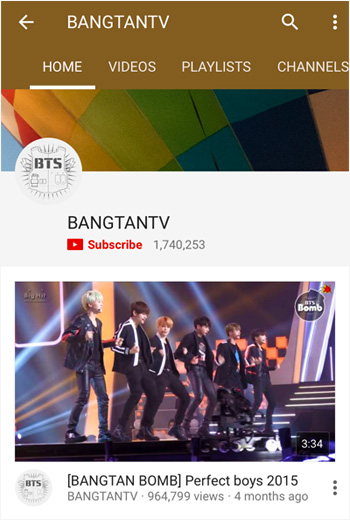 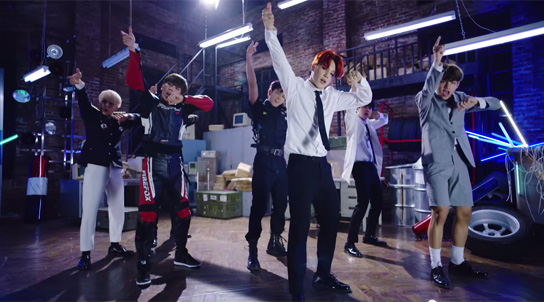 YouTube channels showing various clips of
music videos, live performances and
daily life have been a focal point
for K-Artists, and spread the popularity of K-Music.

Compared to your average music fan, K-Music fans are a different breed. Made up mostly of people in their teens and twenties, K-Music fans are familiar with all things digital and actively use digital means of communication. They are agents of cultural change who influence one another without being limited by the physical distances that separate them and have no reservations about openly discussing the latest news and their thoughts and opinions with others via social media. A point proven true by the fact that KCON’s digital exposure increased at an average of 390% a year since 2012 (between 2012 and 2015, mentions to KCON increased 24 times on Facebook, 9 times on Twitter, and 7 times on Instagram). In particular, especially loyal K-Music fans not only attend KCON events regularly, but, as culture leaders deeply interested in the K-Culture as a whole, their high aware of Korean culture and products and insatiable consumption of and demand for even greater amounts of K-Content serve as motivation for the content creators. 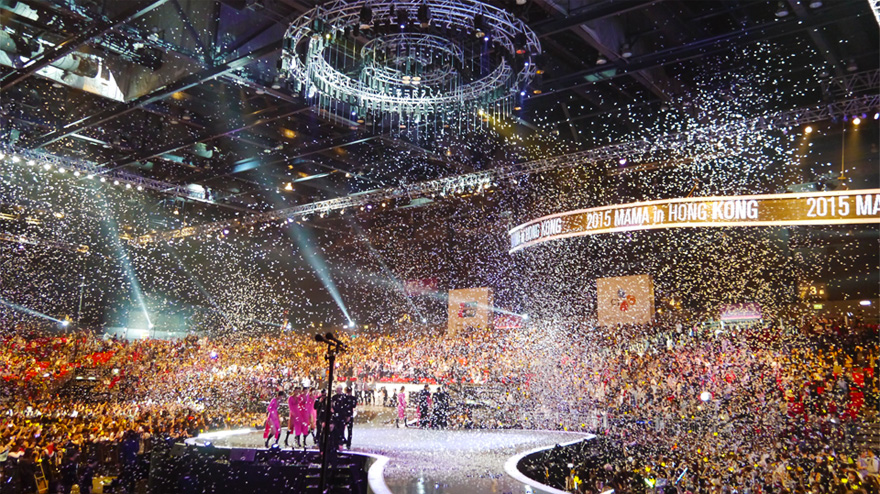 MAMA encouraged fans to vote for the best K-Artist on their website and to tweet the name of the star they thought had the best style,
using the hash tag #MAMAredcarpet. This shows the powerful effect of digital media on K-Music.

Mnet Asian Music Awards (MAMA), which is the pinnacle event of the year for K-Music fans the world over, allows anybody, anywhere in the world to vote for their favorite K-Music artist or group. In 2014, more than ten million fans from 210 countries cast their MAMA votes within just ten minutes of the polls opening and demonstrated MAMA global reach and popularity while setting a new record in the process. And those votes actually count for something. At last year’s MAMA, for example, EXO and f(x) took home the Global Fans’ Choice awards in men’s and women’s categories, respectively, based on fan votes received via social media. MAMA also tries to communicate with its fans in interactive ways by streaming 360-degree images of stars on the red carpet, posting pictures of particularly well-dressed stars with the hashtag #MAMAredcarpet, and presenting the Best Asian award to the star whose photo received the most retweets. Mwave on twitter (twitter.com/officialmwave), which posts news and concert images of K-Music stars, is a perfect example of the scale of presence K-Music has in digital media.

Convergence of
Participation and Kinship 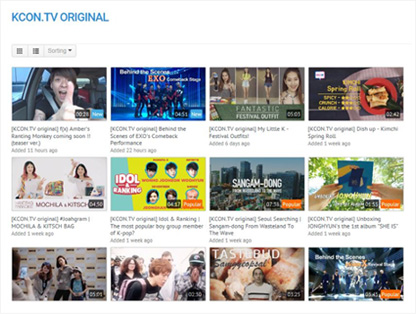 KCON TV, which broadcasts the cultural exchange
at KCON in an extended form of digital media

KCON TV, one among various digital channels about K-Music,
is providing not only domestic but foreign fans with information
and live clips.

Experts point to K-Music as an example of the "convergence culture" first described by media scholar Henry Jenkins. For example, open platforms like YouTube, Facebook, and Instagram allow anybody, anywhere in the world to access K-Music without being limited by borders or boundaries. YouTube, in particular, has played an instrumental role in K-Music’s popularity by maximizing fan interaction and participation. By making it possible for anyone to create a one-person media platform and express themselves, YouTube helped created a culture in which K-Music fans actively share their opinions and feelings regarding a common interest.

A clear example is MRJ, a vlogger who shares his K-Music reviews via a YouTube channel called MRJKPOP. MRJ is arguably as popular as any K-Music artist or group and has become influential enough to be granted exclusive interviews with artists in the likes of Mamamoo. Other K-Music fans such as SΔLV & FAMILY and JREKML also run their own one-person media channels and create K-Content of their own. In particular, JREKML’s Trash series of videos, in which he humorously talks about his love for K-Music and how much influence it has had in his life, has turned K-Music fandom into a form of entertainment in its own right. K-Music vloggers are, in essence, creating their own content within the K-Music sphere.

K-Music artists are also reaching out to fans via their own one-person social media channels. Amber from f(x), for example, runs a YouTube channel called What The Pineapple! and through it shares funny videos of her and her friends discussing a variety of topics such as Korean food and Instagram. Peniel of BtoB is another example. Through his channel POV, Peniel shares personal moments from his private life with the rest of the world.

Digital media has also evolved alongside K-Music. KCON, the meeting point between K-Culture consumers and creators, for example, has expanded its presence beyond the physical realm and now exists in various digital forms as well. Through KCON TV and KCON Live Chat, KCON now delivers latest KCON-related news in real time and shares with the world KCON’s vision of entertaining and inspiring the masses while creating countless new possibilities and encouraging creative thinking.

From K-Music
to K-Culture

The role of digital media in K-Music is no longer limited to the digital realm and has created a number of interesting phenomena. One of the most fascinating is the emergence of the analog culture, where K-Music fans reproduce performances of K-Music performers, form tribute groups, and organize unofficial events such as K-Pop Challenge. It is no exaggeration to say that, through digital media, K-Music has transcended time and space to create an entirely new cultural phenomenon known as K-Culture.

K-Music connects
the entire world as one
via digital media.