Beyond the music, K-Music

Music for the 21st Century

If you think music is just for listening, K-Music will prove you wrong.
K-Music is a new style of music that is meant not only to be listened to, but to be seen and felt as well. It gracefully weaves together powerful vocals with avant-garde fashion and dynamic choreography into a single package and was created by the 21st century for the 21st century.

Just a couple of decades ago, listening to music was somewhat of a cumbersome process that required a degree of patience from the would-be listener. To listen to a new song, one had to go out to a physical store to buy a CD and then play that CD using a dedicated player. The arrival of the iPod in 2001, however, was a game-changer. We were suddenly able to download songs whenever we wanted and, through streaming services like SoundCloud, discover entirely different genres of music we didn’t even know existed. This unprecedented level of convenience in accessing music, however, also changed the way we consume music. Our level of patience plummeted to zero, and the decision as to whether we like a particular song or not was made after only listening to the beginning seconds of it. And so we started to demand greater thrills and entertainment from music and gravitated, like a moth to a flame, towards new and innovative media platforms like YouTube. Looking back, YouTube really was the perfect platform for K-Music, which always presented strong vocals, powerful choreography, and trend-setting fashion as a single package, and, as it grew increasingly more popular internationally, so did K-Music. 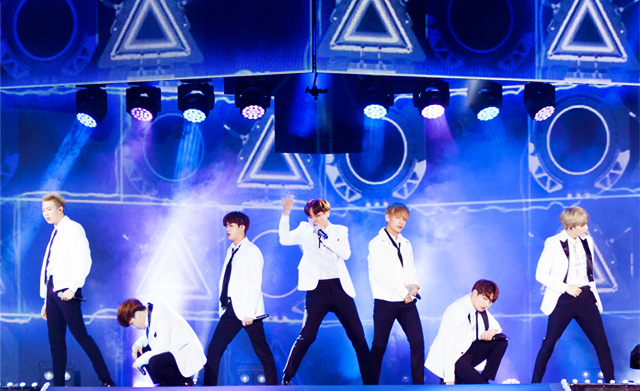 In a music industry that is constantly
changing, K-Music has created a unique
niche with the matchless style and
performances of its artists, as well as their
great vocal ability.

Before YouTube, there was, of course, MTV. When it was launched in the 80s, MTV changed music’s identity from an aural one to a visual one. YouTube and MTV, however, differ in how their viewers perceive music and consequently their respective reach. If MTV were a one-way system of music delivery, YouTube is a much more interactive one where the viewer is allowed to make choices based on their preferences and to interact with the content creators by providing their own input in turn. At an age when one can find videos of Big Bang concerts in not only Seoul, but in places like Thailand, Mexico, France, and the UK, viewers are focusing more on the multidimensional aspects of music amidst a constant stream of new concert videos being uploaded each and every day. These days, YouTube even “recommends” videos to users based on their preferences. So, a fan of Sistar, for example, can easily discover other K-Music artists such as EXO, BTS, Mamamoo, Red Velvet, and Twice without putting in any effort thanks to YouTube. Listeners get to expand their playlists, compare and analyze various groups and artists and give greater attention to the what makes each unique. SXSW (South by Southwest) Music Festival’s General Manager James Minor, who recognized the potential of K-Music early on and invited K-Music groups and artists such as f(x) and HyunA to perform at the worldwide music conference, said, “K-Music is totally different from the music of other countries. The artists give it their best, have great energy, and understand how to incorporate that energy into their performances.” As such, K-Music is a new form of music created by the 21st century for the 21st century and its goal is to satisfy the demand for music that can both heard and seen.

K-Music gracefully weaves together
powerful vocals with avant-garde fashion
and dynamic choreography
into a single package.

One of the things people find particularly fascinating about K-Music is the ability of its artists to sing steadily and hold the correct pitch even as they perform insane dance moves on stage. K-Music artists, in fact, train for long durations of time to be able to sing confidently under any circumstance. Groups like Sistar and TaeTiseo dominated the charts with their unmatched vocals, and Block-B is adored by their fans for their ability to pull off powerful dance moves without compromising vocal performance. 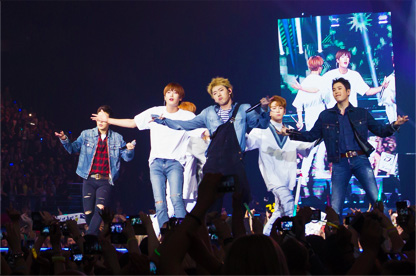 The passionate live vocals of the sweat-drenched Block-B
members were practically flawlessness, as if in lip sync. 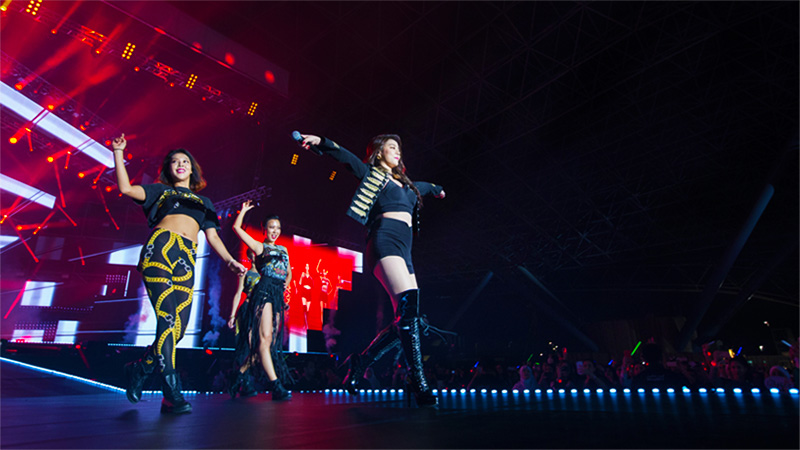 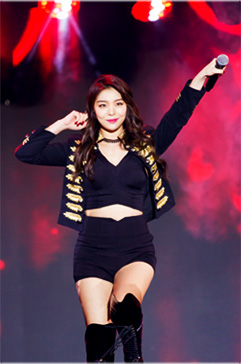 Ailee enthralled the fans with her outstanding vocal performance that boasted of a shake-free treble.
Calling her the diva of KCON 2016 Abu Dhabi was no hyperbole.

Ailee, whom countless K-Music artists look up to and attempt to emulate, drove the audience wild at KCON 2016 Abu Dhabi in March with her uncanny ability to hit high notes and produce incredible vocals. Ailee was born in Denver and grew up in New Jersey. She always dreamt of becoming a star and earned the nickname “10-million-click girl” after a video of her singing on YouTube reached ten million views. Ailee, who says she focused on developing a pitch-perfect singing ability, looked up to Beyonce as her role model and received the Best Female Vocal Performance award at the past two Mnet Asian Music Awards. As such, K-Music artists invest considerable amounts of time into honing their singing skills and this is one of the reasons why countless fans from around the world continue to support them.

Fashion designers from all around the world jostle to have G-Dragon attend their shows. As such, G-Dragon is proof positive that fashion is a crucial component of modern music. By blurring the line between men’s fashion and women’s fashion and mixing and matching clothes from indie labels with haute couture creations from the world’s best-known designers, G-Dragon and Big Bang as a whole have made fashion as an indispensable part of their identity and perfectly illustrate that K-Music is meant to be both heard and seen. BTS, whose Mood for Love series of albums sold more than a million copies, has always presented themselves as a rough, masculine, and rebellious bunch and reinforced this point through their clothing choices. In the music video for Fire, the band breaks the existing rules and expresses their rebellious side by pairing Hawaiian shirts, striped shirts, sukajan jackets, and suede jackets with torn jeans and, in the music video for Awesome, the band members wear a motorcycle outfit, a business suit, and specific looks to demonstrate various archetypes of masculinity. BTS does a wonderful job merging fashion into their music and through fashion expresses rebelliousness, youth, and masculinity as their ideals while giving the listeners and viewers greater entertainment value for their money. 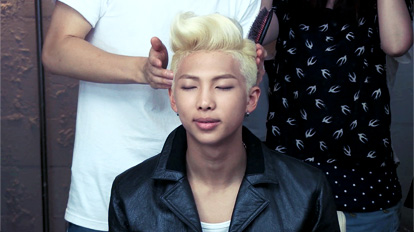 The style of BTS, which is sometimes masculine and
sometimes reminiscent of rebellious teenagers, represents
the element of K-Music that always surpasses expectations. 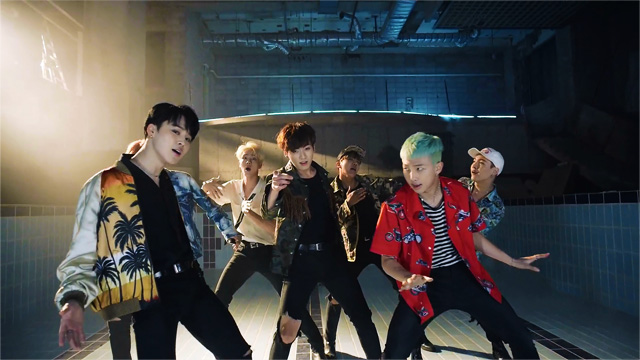 Perhaps the biggest factor behind K-Music’s explosive popularity around the world is the spectacular choreography never before seen in any other music genre. From EXO to Twice and Block-B, just about every K-Music artist and group incorporates mesmerizing choreography into their performances. There is so much world-class choreography in the world of K-Music that fans are still trying to work out what the all-time top ten choreography performances are. If you need more proof that K-Music is meant to be both heard and seen, all you need to do is watch the dance videos uploaded by the artists and groups. These videos are just as popular, if not more, than the official music videos. In fact, when Taemin from SHINee released a solo video of him dancing, it received more views than any of his music videos did.

Fans can’t take their eyes off of the
enchanting freestyle performance by Block-B,
which was filled with personality from each
band member.

Once again, K-Music is meant to be heard and seen, and Mamamoo shows us how to enjoy K-Music through sultry dance moves during their on-stage performances of You’re the Best and Um Oh Ah Yeh. Mamamoo even changes their choreography slightly with each performance. Solar, one of the group’s members, said in an interview, “Stage performance is Mamamoo’s biggest strength, and we don’t want to bore our fans by doing the same moves over and over again. We want to offer the audience something new every time.”

We want to offer
the audience something new
every time.