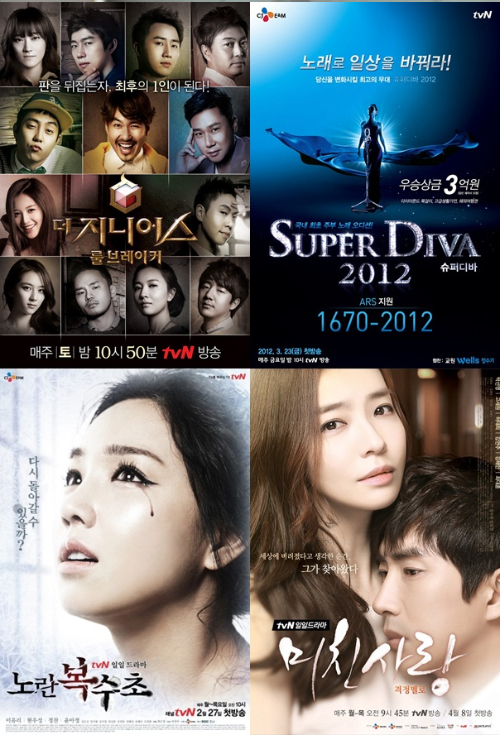 CJ E&M announced that it had completed sales contracts for a content format of its programs at 2014 NATPE in Miami, Florida. The content formats being exported include its survival reality show ‘The Genius’, singing audition program for housewives ‘Super Diva’, and TV dramas including ‘Yellow Boots’ and ‘Crazy Love’. NATPE, hosted by the National Association of Broadcasters, is the largest video content market in North America, marking the 51st anniversary this year.

The sales contracts will see ‘The Genius’ being produced in the Netherlands, and ‘Super Diva’ being produced in Central and South America, including Mexico, Columbia and Argentina. ‘Yellow Boots’ will be made as a local version in Ukraine and Italy, and ‘Crazy Love’ will be remade in Mexico for local viewers.

It is worth noting that the export of the format of ‘The Genius’ to the Netherlands, dubbed the ‘home of TV program format’. Korea purchased several Dutch TV formats and remade them, including ‘Voice of Korea’ and ‘1 to 100’. The sale is significant in the way it shows that Korea, which was once a format importer, has now become a format exporter.

Being able to sell a program format overseas is a clear sign that the creativity and the quality of Korean TV program contents are highly rated, an improvement over the past when sale contracts tended to made on TV programs. More Korean broadcasters are now making a licensing agreement for the sale of format packages, selling everything from a simple idea to a consulting service, making it no longer a simple sale of an existing format, but a step towards making a brand of Hallyu TV.

The regions showing exported TV contents have expanded, from China and Southeast Asian countries to those in Central and South America, US and Europe, paving the way for Hallyu TV to become worldwide. Lee Deok-Jae, head of CJ E&M tvN, said, “Korea’s first export of a TV format package was ‘Super Diva’. The program is now exported not only to China, but to the rest of the world. ‘The Genius’ has successfully been exported to the Netherlands, the home of the TV program format. Not only that, multiple countries are in discussions with us on the sale of ‘Grandpa over Flowers’. In the past, we sold simple ideas of TV programs or entered into a limited form of sales, but Korean TV program formats are now growing to be a new brand of Hallyu.”

CJ E&M has sold formats of ‘Super Star K’, ‘Super Diva’, ‘The Romantic’ (to China), ‘Nine’ (to the US), and recently discusses with the US and Singapore over the sale of the format of ‘Grandpa over Flowers’.