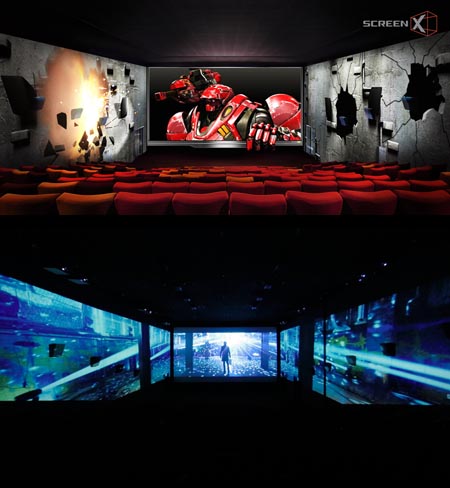 ScreenX, the world’s first multi-projection technology developed by CJ CGV has notched up a string of positive write-ups from major overseas press outlets.

Ever since The X, the movie directed by Kim, Jee-Won and starring Kang, Dong-Won became the first motion picture to use ScreenX technology at its premiere at the 18th Pusan International Film Festival, members of the foreign press who watched the movie on ScreenX have hailed it as the evolution?and indeed the future ? of cinema.

The Independent, a major British daily, devoted an article to ScreenX under the title of‘ Widescreen, immersive and no funny glasses, Is this the future of 3D cinema?’ The Independent called the viewing experience in ScreenX “overwhelming” and went on to note that “it [ScreenX]solved the problems of widescreen and 3D and is an innovative technology that could change all”. The newspaper mentioned one of the advantages of the technology as its lower installation costs as it uses existing auditoriums, a definite boon when compared to other types of auditoriums which have been expensively fitted out with special features. As such, a clear thumbs up for the future of ScreenX.

The prestigious US magazine The Atlantic described ScreenX as the future of cinema. It wrote “ScreenX complements the visual technology and conveys a richer sense of space and distance”. It was unsparing in its praise, adding “ScreenX will offer a stronger cinematic experience to audiences and may offer new possibilities for filmmakers.”

Wall Street Journal, one of the most influential business newspapers in the world, came out in support of ScreenX, saying that “ScreenX makes the movie jump out from the screen”.

CJ CGV said, “We are planning to implement ScreenX in 50 special auditoriums in Korea by the end of this year, before pushing it out next year to global markets including the US, Vietnam, Indonesia, and Malaysia. ScreenX marks a new evolution in cinema, following the previous developments that started from black and white screen to color screen and have continued to 3D.”

CGV’s ScreenX is a multi-projection technology that extends the movie from a main screen onto the sidewalls of a theater. By using three sides as a screen, the technology offers the audience an immersive experience. ScreenX also refers to a special auditorium using the technology. ScreenX technology was developed by CJ CGV in cooperation with KAIST. ‘Multi-projection system’ was patented in Korea last September and has patent applications pending overseas.

Next
KBEE2013Opens: bringing Hallyu contents together with business!