TOUS les JOURS opened up its first bakery in Malaysia! 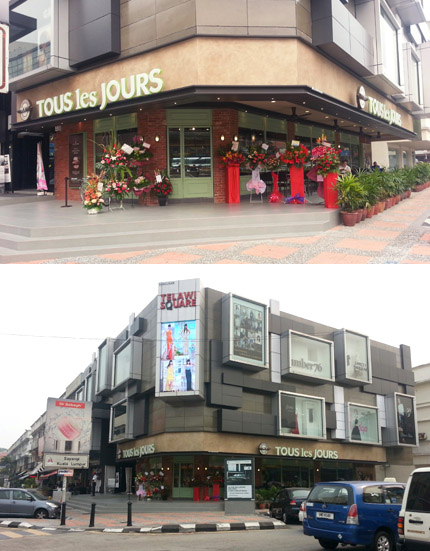 CJ Foodville has expanded its foothold in the Southeast Asian market with its first store in Malaysia. Healthy ingredient TOUS les JOURS(www.tlj.co.kr)announced on June 23that it has opened its first franchise store in Bangsar, which is an area in Kuala Lumpur, the capital of Malaysia, that is famous for being lined with restaurants and cafes.

The store is a cafe-style bakery approximately 150m2 in size and run under a master franchise contract with a Malaysian company. It is located in the heart of Bangsar, which is famous for its trendy and high-end restaurants, cafes and luxury brands shops. The comparisons with Cheongdam-dong in Seoul are clear. Bangsar is one of the key commercial areas of the capital, about 5km away from the downtown Kuala Lumpur. It has been attracting more people of late, particularly from among foreign expats and high-income earners in Kuala Lumpur.

A source of TOUS les JOURS said, “The local response has been really good. Despite not featuring a particular promotion for our opening, we still managed to run out of breads and indeed all our products by around noon. Sales figures like this are meaning that the store is now the number one of ours across all Southeast Asia in terms of sales achieved on the opening day. In terms of numbers, sales exceeded the estimated sales revenue by 2.5 times. It gives us every reason to have high hopes for our business in Malaysia.”

CJ Foodville plans to undertake a period of aggressive expansion in Malaysia, boosted by the excellent sales of its first store there. Malaysia’s Empire which completed the master franchise contract with TOUS les JOURS, runs a range of businesses that include real-estate development, hotels and restaurants. In stabilizing its local operations and operational know-how, it is expected that the business expansion can now proceed much more smoothly. TOUS les JOURS has entered the markets of five Southeast Asian countries. including Vietnam, Indonesia, Philippines, Cambodia, as well as already having presences in the markets of the US and China. TOUS les JOURS has continued to rank top in terms of bakeries in Vietnam when decided by the number of stores and total sales revenues.