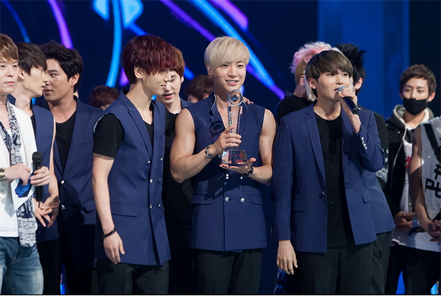 The hottest K-POP stars of the year will continue to rock the fans when they all visit in October this year.

music chart program Mnet M Countdown will be heading to this October 4 (Thursday) to hold the One Asia Tour 2012 M Countdown Smile Thailand Tour at the Rajamangatan Stadium.

This is M Countdown’s second global encounter after its tour in in April 2011 and its first concert in .

The October tour will consist of all K-POP stars who have shown major popularity during the months of May to September of 2012, and who have often hit the top of M Countdown charts. Groups that have already been confirmed are top-ranking stars, including Super Junior, SISTAR and Infinite. Because the ranks are still being calculated, Mnet plans to announce the full list of participant groups in September. M Countdown is already a famous show abroad as it is in , due to its connection with global Mnet and other international media outlets, particularly enjoying popularity in . October’s concert is expected to be a success also due to the popularity of K-POP in .

Mnet M Countdown collaborates with FEOH Thai Entertainment Company. A spokesperson from FEOH Thai Entertainment Company said, “We’ve had many K-POP artists come to before, but we have never had concert like this where it is hosted by a music chart program. We are already looking forward to the star’s performance.” The spokesperson also said, “K-POP stars and their songs as well as music programs are quite famous in because of the popularity in the country. It was since MAMA (Mnet Asian Music Awards) awards in Macau in 2010 and in in 2011 that we truly started to understand how popular K-POP is in . We are looking forward to the performance.”

The reason that M Countdown is to be held in after its concert in in April is mainly due to sweeping popularity in for K-POP. CJ E&M said, “In Korea, the fact that K-POP stars and their songs are loved by people in is well informed among the public through diverse channels. However, it was only since MAMA awards in Macau in 2010 and in in 2011 that we truly understood how popular K-POP is in . We are lucky to have collaboration with FEOH Thai and visit together with Korean singers. We can’t wait to show the Thai fans not only K-POP but Korean concert presentation and the fun atmosphere too.” Rajamangatan Stadium, where One Asia Tour 2012 M Countdown Smile will be held in October, may hold about 40,000 viewers with the history of hosting mega-scale shows by U.S. POP Star Lady Gaga and SM TOWN Concert.

Meanwhile, Mnet M Countdown, the country’s representative music chart program, has been aired live every Thursday since its launch in 2004. The music program particularly draws popularity in that it serves as a platform for top stars’ come back or emerging singers’ debuting program. Among other things, the outstanding performance presentation which adds light to pop singers’ performance is assessed to give unrivaled shine to Mnet. For now, Mnet is being aired live in the and through Mnet and Mnet . In addition, it may be available in 11 countries, including , , , the , , , . In addition, the program can be accessed through global mnet .com.