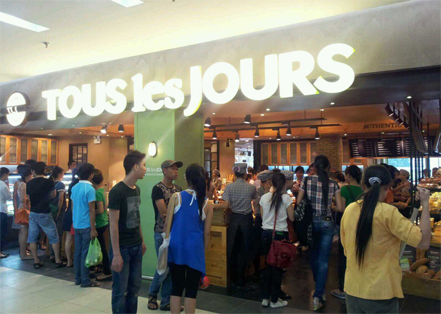 By advancing into Hanoi, Vietnam, for the first time in the country’s bakery industry, Tous les Jours positions itself to become the top bakery brand in the Southeastern Asian market. Tous les Jours, which already has its presence in five countries, ranks 1st among the country’s bakery brands in the number of countries in which they operate. Tous les Jours (www.tlj.co.kr) renowned for strictly adhering to the use of proven food materials, under the umbrella of CJ Food Ville, announced that it launched the branch on June 20th at the center of Hanoi, Vietnam, that serves as the hub of administration, commerce, culture and education.

The launch of Tous les Jour’s branch in Hanoi, Vietnam, holds significance in that the bakery brand became the first to enter Hanoi, Vietnam, in the industry. Since it entered Ho Chi Min in June 2007, C J Food Ville has expanded the number of its stores to 15 and has maintained two digit growth per year over the past five years. In addition to this, it has reported the biggest sales by branch in the Vietnamese bakery market. What is more, its successful operation in Vietnam led the company to enter the Philippines as well. The company also signed the master franchise agreement with its counterparts in Cambodia and Malaysia in 2011. The company is taking necessary steps for the launch to be made in the year. Tous les Jours’ first branch in Hanoi, Vietnam, is located in the 1st floor of Bic C Mart Thanh Long, the largest mart in Vietnam.. The branch occupies the area of about 268 square meters (about 81 pyung), which has concept similar to the branch launched on June 22nd in New York, the U.S.

The launch of the branch is met with quite favorable responses from local customers. A manager responsible for sales department at Bic C Mart, which helped Tous les Jours to enter Hanoi, said, “We are very pleased to see the launch of Tous les Jours’ first branch in our mart. Because the bakery brand is very famous in Ho Chi Min, our customers are already informed of the brand and hail the launch in Hanoi. The company set strategic alliance with Bic C Mart and moves to expand its sales network nationwide.”.

With the launch of its first branch in Hanoi, Tous les Jours will have operated a total of 51 branches in five countries ?U.S., China, Vietnam, the Philippines and Indonesia-. As of late June, Hanoi branch has operated for a week, during which it earned sales 2.3 times larger than expected and 2.5 times larger than that of the top local bakery brand.

A source from CJ Food Ville said, “In April, CJ Group held conference in Vietnam, in which it announced the plan to build “the 3rd CJ” in Vietnam. Now that Tous les Jours, with its foothold in Vietnam, laid foundation for the launch of CJ CGV and CJO (SCJ) Shopping, we will make effort to build successfully localized CJ in Vietnam together with several other business operations under the umbrella of CJ Group.”

Tous les Jours holds event “Tous les Jours Invites You” in July to mark the 20th anniversary of establishing diplomatic relationship between Korea and Vietnam. The event, designed to provide 100 percent success rate of scratch card to customers in Vietnamese branch of Tous les Jours, allows three top groups of winners ( No.1 team consisting of two members) to visit Korea and appreciate K-POP Stars’ performance. The Vietnamese, invited by CJ to see the performance of K-POP stars held by CJ E&M, are also allowed to experience a variety of K-POP(JYP NATION) performances and CJ Group’s businesses, including CJ Food World.

Meanwhile, CJ Food Ville, which plans to launch the second Hanoi branch in August, plans to proactively increase the number of branches and set up comprehensive strategy with an aim of topping sales in the Southeastern Asian bakery market.