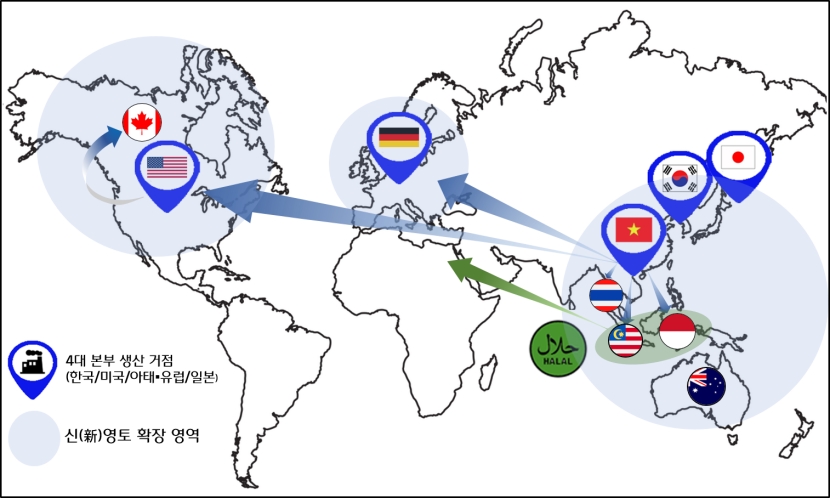 CJ CheilJedang announced on Jan 8 that it will accelerate its entry into new international markets for K-food, making a big push into countries outside of the US, Europe, and Japan.

CJ CheilJedang CEO Choi Eun-seok said, “Whereas we laid a foundation for our entry to the world market last year, this will mark the first year we secure a future growth driver grounded in culture, platform, wellness, and sustainability, or CPWS. CJ CheilJedang will make a serious entry into uncharted territories and propel growth pivoting on our seven global strategic products (or GSP: mandu, cooked rice, chicken, K-sauce, kimchi, dried seaweed, and rolls).”

Scaling up four major areas that consist of Korea, the US, Europe & Asia Pacific, and Japan, which will function as outposts for entry into neighboring regions using their production and sales infrastructure.

As for Japan, where CJ CheilJedang is already engaged, the status of the local subsidiary will be elevated to head office, in an attempt to augment the four major areas alongside Korea, the US, Asia Pacific, and Europe.

In the US, the company will expand the supply capability to build the brand power of Bibigo, while broadening the premium product lineup through Schwan's to claim the number one spot in the Pizza market.

In Europe, where CJ CheilJedang has opened its UK subsidiary to start in earnest, the company will enlarge the mandu business centered around Germany and the UK, the main market in Europe. The company will also expand its product lineup to include a differentiated portfolio of Asian foods and seaweed snacks. Continuing until 2025, CJ CheilJedang aims to lay the groundwork in Western Europe and widen the market throughout Europe in the long run. The Kizuna plant in Vietnam, which is the location base for Asia Pacific and Europe, will expand the wrapped food portfolio, which consists of the company’s major food items- spring rolls, mandu, and dim sums- to boost competitiveness.

In Japan, CJ will reinforce its market position of Micho, a fermented fruit vinegar drink that thrived into a KRW 100 billion business, while promoting home meal replacement (HMR) products, such as Bibigo Mandu. Micho, which became a dominating product with its vinegar drink that you have by diluting it in water, will release new flavors with fresh packaging and distribute them through a larger channel. In addition, healthy, Korean readymade meals and other businesses focused on K-food will be expanded on.

CJ CheilJedang intends to expand its K-food territory across the world. To that end, the company has decided to initially enter Canada for the North American market; and Australia, Thailand, Indonesia, and Malaysia for the Asia Pacific market. CJ CheilJedang will adopt a two-track approach of producing goods locally and through a country-to-country (C2C) business model. In the C2C model, you manufacture products in a global production base, then export them to nearby countries.

In North America, CJ CheilJedang has developed a plan to use the business infrastructure in the US to enter the neighboring country Canada. CJ will target the mainstream market with Asian Food like mandu and cooked rice and then secure new production bases in phases. Australia, where is it not easy to export products containing meat, CJ will secure a mandu production base within the country and enter large-scale distribution channels.

In Thailand, CJ CheilJedang plans to take advantage of its geographical location, which is very close to Vietnam where the company has already secured production capability. Moreover, CJ will promote wrapped foods in consideration of the preference of local consumers, Korean-style fried chicken, and fresh kimchi. Given that Thailand is a country where K-culture is enjoying a lot of popularity, CJ will raise the brand awareness of Bibigo on the back of K-content, such as the K-pop music convention (KCON) and MNet Asian Music Awards, better known as MAMA. In Indonesia and Malaysia, CJ will secure local production capacity and will foster the region as a K-halal advanced base that covers not only Southeast Asia, but also the entire halal market including the Middle East.

CJ CheilJedang’s international food business recorded cumulative sales of KRW 3.77 trillion grew is Q3 2022, which is up 19.4% from the same period in the previous year, while operating sales posted KRW 227 billion, which is a steep increase of 38.8%. Of the entire food business, sales for the global food business account for as much as 46%.

A CJ CheilJedang representative said, “We will do our best to promote the high standard of K-food to the world based on the philosophy of CJ CheilJedang Chairman Lee Jae-hyun, globalization of the Korean food culture.”