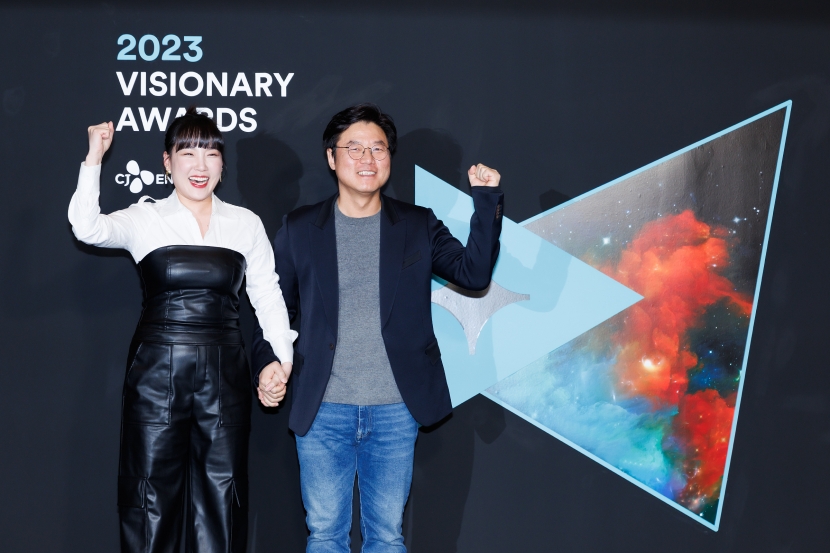 CJ ENM invited 2023 Visionaries, who are considered as having led the entertainment trend, bringing about changes and innovation to the 2023 Visionary Awards at CJ ENM Center in Sangam-dong, Mapo-gu, Seoul on Jan 8, 2023.

From top producers Young-seok Na and Jin-joo Lee, who captivate the viewers with the ingenious concepts and formats of comedy shows; writer Seo-kyung Jeong, one of the most successful screenwriters and a natural-born storyteller who has driven the phenomenal success of numerous TV series; Don Lee, an irreplaceable icon with a powerful presence; Eun-bin Park, to (G)I-DLE, a girl band; the awards were attended by the nation’s biggest celebrities in the show business. Comedian Eun-ji Lee, who showed great chemistry with producer Young-seok Na in the Earth Arcade, was also there to congratulate the winners, and Hyun-gyu Jeong and Hae-eun Sung, who revealed their unwavering love in Transit Love 2 and fascinated numerous TV viewers, showed off their friendship with producer Jin-joo Lee by attending the awards.

CJ Vice Chairman Miky Lee said before the awards ceremony in a congratulatory video, “Nowadays, it’s more obvious that there are no barriers to a genuine story as compared to before. I am thrilled and proud to be Korean as I watch people around the world laugh and be moved by watching our stories. I’d like to express my sincere congratulations to the people chosen as 2023 visionaries, and I support and applaud them with all my heart as they map out a new path forward.”

The 2023 Visionary Awards were kicked off with a dazzling media performance by artist Seok Lee, who visualized the moment when the originality of visionaries who brighten the future of K-entertainment come into full bloom. The awards presented a meaningful occasion during which the heroes and heroines of K-entertainment got together to exchange their thoughts and inspire one another.

Producer Young-seok Na, a comedy creator who continues to improve in doing what he does best, when he was named a visionary said, “Thanks for giving me this amazing award. I have been in a slump for several years, but I met this incredible team and was able to do the show Earth Arcade and get this great energy working with them. I have been able to come this far not because of my skills but because of the remarkable cast members. I am especially happy because my dearest colleague, producer Jin-joo Lee, won an award today, also.” 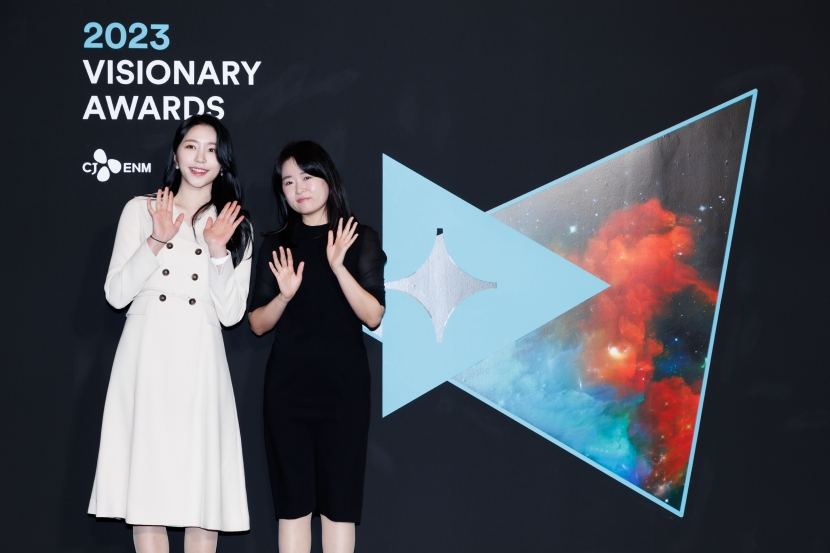 Creator and producer Jin-joo Lee, who gave birth to a new comedy genre with absolutely immersive narratives through her show, Transit Love, said in her speech, “I was able to plan the show Transit Love because there were people involved who saw the potential and allowed me to unleash that potential. I feel so lucky to be a part of this show, and I’d like to share this joy with the staff who were in this together,” She also thanked the cast, saying, “ I had wanted to say to the cast members of Transit Love that they are the stars of this show.” She added further, “Everything I have done and everything I will be able to do in the future is made possible because of the time I have spent with producer Na.” She ended her speech by creating a heartwarming atmosphere, saying, “It is a great honor to be named a visionary alongside producer Na, and I’d like to use this opportunity to express my great respect for him.”

Storyteller Seo-kyung Jung, who challenges prejudices with her original perspective and stories, said upon receiving the award, “As soon as I heard that I was to be given this award, I looked for the meaning of the word visionary. It was a word referring to a person with clear ideas of what the world would be like in the future. I’m not confident that if I meet the definition of this award but I will work hard with the aim of making a visionary story.” She also expressed her thanks, saying, “I’d like to thank producer Chan-wook Park, and the Small Women team.”

Don Lee, an irreplaceable actor whose unique character became the origin of a worldview, said, “I offer my sincere thanks for giving me this very special, meaningful award. The Outlaws was created with the passion and dedication of many people. I'll strive to deliver entertaining content that can be enjoyed by more global audiences and that transcends borders, languages, and ethnicity with all of you in this room today."

Eun-bin Park, who created a sincere character with tireless observations and research to change the prejudices of the world, said, “It seems I am given this honor thanks to many great predecessors who have walked this path before me. I think the word awesome describes how I’m feeling now the most concisely and honestly. I’d like to thank you for giving me this opportunity to think about my originality in the daily process of figuring out what my vision is.”

Last but not least, (G)I-DLE, an independent girl band that reveals their colors and beliefs through their music and performance, said, “We feel more nervous than in any other awards ceremonies. The awards we have been given lately were about our achievements, but we are so honored that this visionary award seems to recognize the process. We will become artists who excel with better music and performance.” They also expressed their joy in winning the award, saying, “We will work hard not to disappoint everyone who always supports us.”

Actress Hye-soo Kim and singer IU, both of whom were unable to attend due to their prearranged schedules, expressed their regrets for not being at the awards and showed their appreciation through a video. Kim said, “This award seems like a more meaningful and valuable award than any other awards I have received so far. I will continue to do my best to act on new characters and tell new stories in future films.” IU also extended her thanks, saying, “Thank you for choosing me as one of the people who will chart the way forward for K-entertainment in 2023. I will do my best to shine and continue to be a person worthy of the Visionary Award.” Jung-jae Lee, who could not attend the awards due to an overseas schedule said, “It’s an honor to be given the meaningful Visionary Award with people who represent K-content. Thank you so much. I will continue to endeavor to promote K-content in the international market.” Producer Chan-wook Park who is enjoying global attention for being nominated for the Best Motion Picture in the Non-English Language category at the Golden Globe and for four categories in the British Academy Film Awards with his movie, Decision to Leave, said in a video speech, “Decision to Leave is a film that I did my best with to remain faithful to the basic elements of a movie. Interestingly, it won the Visionary Award and there also seems to be a funny meaning to this. Thank you for giving me this honorable award.”

CJ ENM CEO Chang-geun Ku said, “K-content is creating a powerful global fandom and expanding its clout even amid rapid changes. The strength of K-entertainment lies in the originality of people. We at CJ ENM will also continue to reflect on ourselves like our visionaries here today regarding the future of K-entertainment.”

Since 2020, CJ ENM has been recognizing people who have inspired others around the world by making a series of groundbreaking achievements as visionaries, based on their originality across a broad spectrum of Korean pop culture, including television shows, films, music, and comedy shows. The Visionary Awards is a future-oriented award in which exemplary people who set new visions for the future are chosen instead of simply celebrating their achievements and performances. The 10 winners (in Hangul order) who won the 2023 Visionary Awards are as follows: Hye-soo Kim, Young-seok Na, Don Lee, Eun-bin Park, Chan-wook Park, IU, (G)I-DLE, Jung-jae Lee, Jin-joo Lee, and Seo-kyung Jung.

Previous
[S.D.W] The most popular and most trending! 🤩 | All the best content of December 👀 TOP5 with the most views!