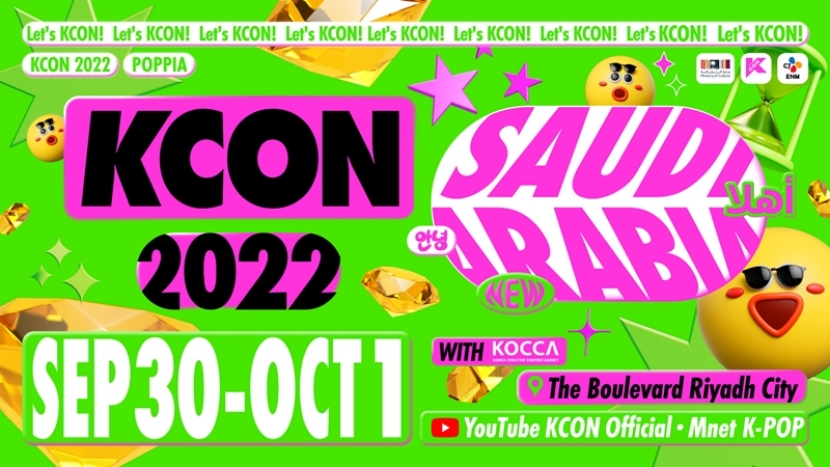 K-CON, World’s No.1 K-culture festival, will continue to gather fans around the world with KCON 2022 Saudi Arabia, followed by KCON 2022 LA, which met with 7.2 million K-pop fans both online and offline.

CJ ENM announced that it will host ‘KCON 2022 Saudi Arabia’ at the Boulevard Riyadh City, the largest entertainment complex located in the capital of Saudi Arabia, for two days on September 30th (Fri) and October 1st (Sat), local time. This will be the first KCON to be held in Saudi Arabia.

Half of Saudi Arabia’s population is under the age of 30, among whom K-pop is especially popular online. The Saudi Arabian government has selected Korea as one of its strategic partners for Saudi Vision 2030, which it presented as part of its roadmap to foster high value-added industries, such as culture and tourism. Because of its ideal geographical location, which connects Asia, Africa, and Europe, the country is capable of offering K-culture with an opportunity for it to spread to neighboring continents that speak different languages. As such, CJ ENM chose Saudi Arabia as a new KCON destination, thanks to the country’s Millennials and Gen Z-led high interest in K-culture, the government-led efforts to foster the culture industry, and the geographical advantage that connects the country to Africa and Europe.

CJ ENM has also signed an MOU with the Saudi Arabian Ministry of Culture in June as a means to promote cultural exchanges in various fields such as music, film, and cultural heritage.

After ‘KCON 2022 SAUDI ARABIA’ was confirmed, CJ ENM unveiled the lineup of performers who will be joining the event, which included ATEEZ, HYOLYN, NewJeans, ONEUS, P1Harmony, PENTAGON, RAIN, SECRET NUMBER, STAYC, SUNMI, THE BOYZ, and TO1. As this KCON is the first to be held in Saudi Arabia, CJ ENM hopes to deliver a once-in-a-lifetime experience enjoyed by all generations through experimental convention content, with the help of 4th generation artists and legendary K-pop artists, who have been the biggest ambassadors of K-culture for the past 10 years.

HYOLYN, known for her powerful singing and unrivaled performances, RAIN, a ‘world star’ who was at the forefront of first generation Hallyu, and SUNMI, acclaimed for her unique songs and choreography, have confirmed that they are joining the event.

K-pop idols responsible for the 4th generation girl group craze will be coming to Saudi Arabia to perform at the KCON as well. NewJeans, the so-called ‘super rookies,’ who gained instant popularity upon their debut, as well as STAYC, who have recorded back-to-back hits with every song they have released, will also be joining the lineup of performers.

Some rising, recently debuted artists will also be joining the event. ONEUS, known for their performances that depict the unique storylines of each album, P1Harmony, who have achieved a career high by breaking 100,000 sales in the first week of their 4th mini album release, as well as SECRET NUMBER, who have been voted as the winner of ‘ROAD to KCON,’ will also be joining the event to meet their global fans.

Some of the most popular K-pop boy groups will also be joining the lineup. This includes ATEEZ, who surprised K-Pop fans with their powerful performance at ‘KCON 2022 LA’, PENTAGON, who sold out their concert, which was held in Japan for the first time in three years, THE BOYZ, whose 7th mini album has received rave reviews across music charts and broadcasts, as well as TO1, who debuted their U.S. tour with ‘KCON 2022 LA’ in August, who are all expected to make the event even richer.

“I am proud that KCON has played such a major role in the globalization of K-culture over the past 10 years by making some remarkable achievements in Asia and North America, mainly in the United States and Japan, which have the largest entertainment markets in the world. We hope that this KCON in Saudi Arabia will mark the beginning of a K-culture craze in the Middle East, with the goal of realizing K-culture globalization in the European market in the near future,” stated Kim Dong-Hyun, Head of Convention Live Business Division at CJ ENM Music Content Division.

KCON is the largest K-culture festival in the world, bringing together performances from K-pop artists and the K-lifestyle in a convention-like setting. It has served as a bridgehead for the spread of K-culture not only in the Americas and Japan, but also in Latin America, Europe, and Oceania since it was first hosted in 2012. After COVID-19 broke out in 2020, the event has been held in the form of ‘KCON:TACT,’ an online K-culture festival, through which it demonstrated its potential to expand into being both an on- and offline festival for global K-pop fans.

This year’s KCONs were held in Korea, Japan, and the United States in May as ‘KCON 2022 Premiere’ as well as in LA in August under the title ‘KCON 2022 LA.’ As for the second half of the year, the series of events will start with ‘KCON 2022 SAUDI ARABIA’ for two days from September 30th, followed by ‘KCON 2022 JAPAN’ at ‘Ariake Arena’ in Tokyo, Japan for three days between October 14th and 16th.

Previous
CJ Freshway to launch full-fledged efforts for its ‘Brand Solution’ business ... designed to help the launch of new brands of franchise customers