Women are dying to work! According to the Korea Economic Research Institute, the female employment rate in Korea is 56.7%, which is lower than the OECD average (59.0%), and Statistics Korea also proved that female part-time employment accounts for 9.3% of all workers in Korea, which is also lower than the OECD average (11.2%). With the job market having deteriorated even more as a result of COVID-19, there is however some good news: CJ Logistics launched ‘*Orange Delivery’, a new line of delivery business for women with career interruptions. Hye-jeong Lee, who has been working as a courier for Orange Delivery since the test operation, expressed her joy for the work she has newly discovered, smiling like she is handing over a long-waited parcel to a customer.

*Orange Delivery: It is the last mile service where women with career interruptions serve as couriers to deliver packages, which are transported to the delivery base in an apartment complex, and then to each home. The color orange symbolizes independence and adventure, encouraging new challenges and fresh starts for women.

Orange Delivery, a great chance to return to work after a career break! 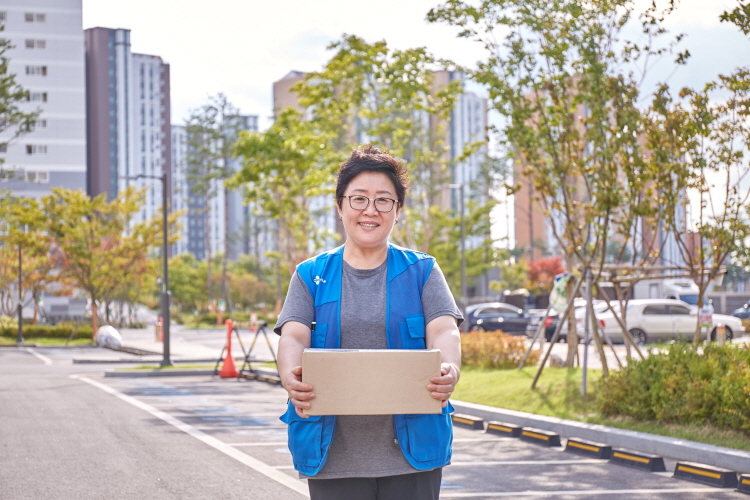 The holidays were too long. Taking four days off in a row, I couldn’t wait to get back to work. (Chuckle)

Q. It seems like you’re more used to the delivery work now.

The opening ceremony of the first Orange Delivery branch was September 9, but I’ve been working every day during the test operation for 9 months since December 2020, so I’m more comfortable working than just doing nothing at home. I feel so refreshed when I’m working. I think all the other couriers would probably agree with me. (Towards her colleagues in the office) Right? (Chuckle)

Q. You seem to be enjoying your work. How did you find out about Orange Delivery?

After being in a terrible traffic accident long ago, I got into the Hwaseong Self-Sufficiency Center in the winter of 2010 and got a license for crafts and an instructor certificate. With that as the stepping stone, I then got busy with making flower crafts for all kinds of events and teaching students in afterschool classes. Then in 2019, I fell down and tore a muscle, and ended up getting leg surgery, which kept me from working. I tried to get a job again after leaving the hospital, but then there was COVID-19. It was really tough.

Then, I got the chance to work at Hwaseong Self-Sufficiency Center collecting strollers, taking laundry requests, and managing customers. One day, the representative of ‘**Happy Orange’ with whom I am currently working suggested I work as a courier. I was told that couriers just have to deliver the packages transported to the base of an apartment complex to each home, and that they can earn a stable income from doing so. Since I’d been feeling as if I were stuck in a rut, I decided to get a fresh start as a courier with a new mindset. Now I’m working hard, taking one step at a time with my colleagues.

**Happy Orange: This is an execution agency of Orange Delivery that manages and supports Orange Delivery couriers so that they can provide high-quality customer service on site.

From A to Z! Efforts made as an Orange Delivery courier!

Q. Some might have told you that working as a courier is tough. How is it, actually?

Orange Delivery is not as tough as the conventional system since there is a delivery base in the apartment complex. The trucks unload the packages in our office, and we take them to each customer’s home in our district, which makes our job easier. Our office is inside the complex, so we can move a relatively shorter distance.

Q. What kinds of packages are there mostly in the main base at the 35th LH complex in Dongtan 2 New Town, and how much is the volume of delivery?

The customers in this complex are mostly aged 40 or above, with there being senior citizens in particular. So, many of the packages are heavy daily necessities that they can’t buy and carry from supermarkets, like rice or mineral water. We mostly deliver daily necessities since it’s a residential district, while there are also a few processed foods mostly consumed by the younger generation. There are also many single-person households, so many of the packages are supplies for companion animals like cats or dogs, such as cat litter or food.

The packages arrive twice every day, in the morning and afternoon, except Monday. We unload the packages when the delivery drivers arrive, sort them according to each apartment building, and deliver them. Tuesdays and Wednesdays have the highest volume of delivery, while Thursdays, Fridays, and Saturdays have relatively little. There are 1,768 households within the complex, but about 500 households haven’t moved in yet, so the volume is expected to increase. 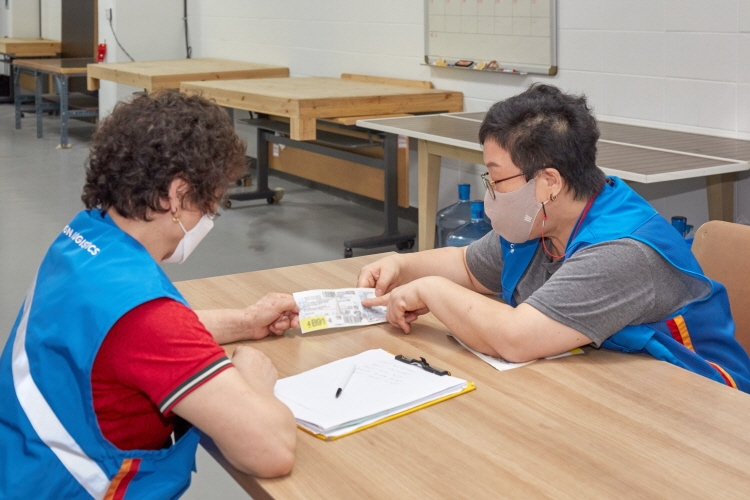 ▶Lee is increasing work efficiency by checking each invoice number with a co-worker, such as handling wrong deliveries.

Q. What was the toughest part about this job at first?

Handling wrong deliveries was the toughest. A few days after the test operation, a customer called after work and said that there had been a wrong delivery. All couriers take pictures after delivering the packages to the door in case there is a wrong delivery, but I wasn’t tactful enough at first. So I couldn’t make out the invoice number, which was the most important thing. So everyone returned to the office and sorted through everything to find the right package. Since then, to keep that from happening again, I take two pictures after delivery: first the invoice number, and then the package and the numbered door together. I also double-check the building number when sorting the packages in the office.

Q. Each and every effort seems to have contributed to stabilizing the delivery.

That’s why it was good to have the test operation period. Everything needs time to increase work efficiency. The four of us tried to create an efficient structure and adjust to it during that period, especially when it comes to handling wrong deliveries more quickly with colleagues living within the complex.

The bond we shared among colleagues was also significant. We overcame work difficulties by having conversations, and now we depend on one another, help one another. We absolutely need and rely on each other all the time now at work.

Growing with the value of work! 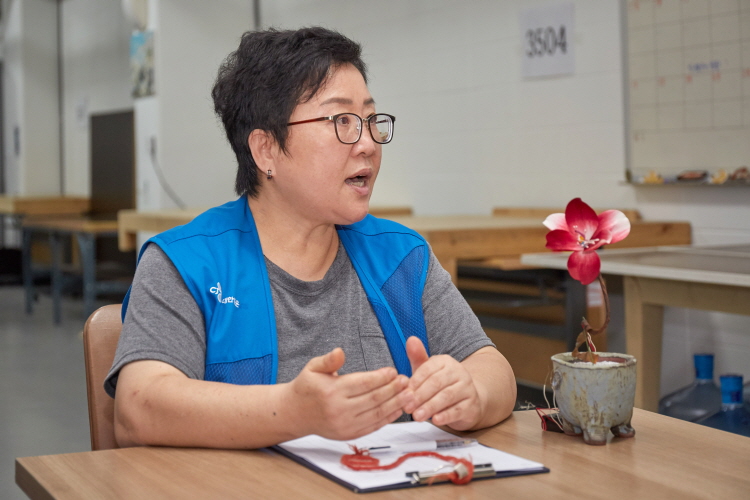 ▶Lee claims that she has found the joy of work with Orange Delivery, reflecting on how tough it is to be in a career interruption. The flower craft on the table is something she has made herself.

Q. As a person who has actually been in a career interruption, Orange Delivery might seem like a wonderful present.

As someone who’s experienced firsthand how precious it is to be able to work, Orange Delivery has become a great inspiration in my life. When I was jobless after the leg surgery, I felt like I was lacking in both income and mindset. Without work, I felt joyless and depressed. There was no sense of accomplishment at that time, which was the toughest thing.

Aside from the money, a sense of accomplishment at work is what gives energy to life. Orange Delivery gave that to me, which I had lost during the career break. This gave me strength and motivated me to think and do things better. I’m really devoted to this job.

Q. You’re probably so devoted because delivery is rewarding. What do you think is the most important thing in parcel delivery?

It’s keeping our promise with our customers. So, I try to deliver the packages perfectly on time. I didn’t realize at first, but now I have this sense of duty in delivering happiness to our neighbors. We try to form a bond with customers, so my colleagues and I are even considering moving into this complex, which will then build even greater trust.

We must also have in mind that this is my job. Every little thing in the office has been through the hands of the four of us. That’s how we prepared this business, and we still have that attitude and mindset. 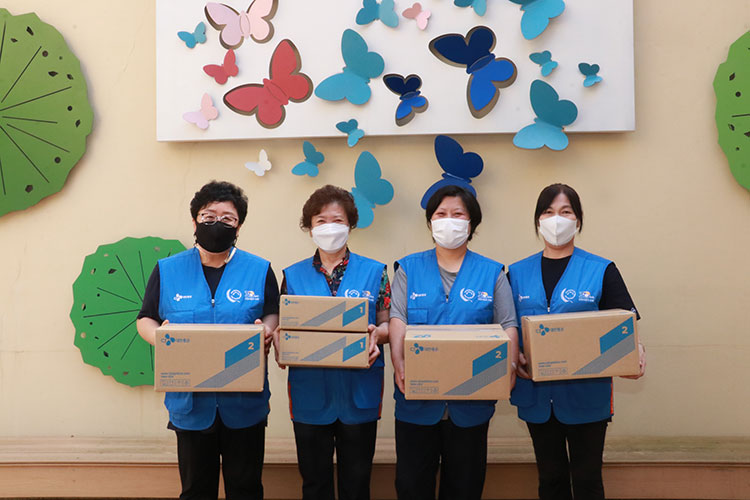 Q. Do you have anything you would like to say to women with career interruptions wanting to become Orange Delivery couriers?

It’s tough but be brave! Having been in near poverty due to the traffic accident, even I had a hard time taking a step forward turning down the basic aids after the career break. Nevertheless, I constantly tried to work instead of settling for the present.

I’ve always been that way. I studied for the school qualification exam while working at the Self-Sufficiency Center and earned a high school diploma and even went to the Korea National Open University. In the process, I realized where I should go and what I should do. I found Orange Delivery as a result. We’re going to set an example as a best practice for more women with career interruptions to have another chance, so that there will be a second and third branch of Orange Delivery.

Q, You seem really inspired and generous, perhaps because of what you’ve gained from your work.

I just want more people to be able to work like us. (Chuckle) Once ‘Happy Orange’ becomes a preliminary social enterprise later this year, there will be more opportunities. I should work harder with my colleagues for sustainable growth.

And personally, with my afterschool instructor certificate and crafts license, I’m going to volunteer at the library in the complex or a social welfare center in the neighborhood and form a bond with my customers, hoping to develop my job for the better.

Lee is enjoying work and feeling rewarded through Orange Delivery by overcoming the obstacle of a career interruption. She is even studying for a social worker license so that she can help more people obtain the sense of accomplishment she has experienced. Like the color orange that symbolizes independence and adventure, her new challenge is just about to begin.

Next
VIPS adopts a premium strategy to live with COVID-19, planning to increase the number of specialized branches by up to 70%

Previous
[Friend of Culture and Dreams] A look into collaborative projects in the film industry! | Ready, Set, Go! #2