Fitted with an assortment of high-tech equipment, such as metering conveyors and DP sorters, CJ Logistics’ Icheon MP hub terminal has processed 200 million parcels as of the end of July 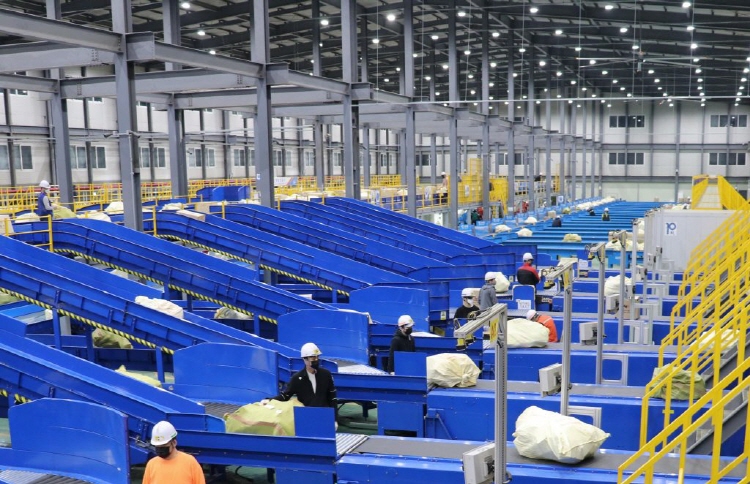 In September 2020, CJ Logistics built its state-of-the-art Icheon MP Hub Terminal, the first of its kind in the delivery industry, which exclusively classifies and relays small-sized parcels, and has seen the company process more than 200 million parcels through the terminal as of the end of July this year.

CJ Logistics’ Icheon MP hub terminal is a hub terminal dedicated to small-sized parcels, which are gathered from around South Korea and sorted by region. The terminal first opened its doors with a pilot operation in September 2020, with an aim to efficiently handle an ever-increasing volume of small-sized parcels due to the growth of the e-commerce market. The terminal was built in Icheon, Gyeonggi-do so as to establish a network to handle parcels from around South Korea, with its land area alone being about 28,403 square meters (8,592 pyeong).

CJ Logistics’ MP Hub terminal is fitted with state-of-the-art equipment capable of efficiently handling small-sized parcels bundled in pouches. Of particular note is that the terminal is equipped not only with MP hub scanners, which are fitted with six cameras to recognize waybills attached to pouches that vary in shape but also with metering conveyors that maintain a uniform distance between pouches. Moreover, the terminal is the first in South Korea to have adopted “DP (direct push) sorters,” which automatically sort bulky and heavy pouches by destination.

CJ Logistics’ sorting systems dedicated to small-sized parcels, such as its Icheon MP hub terminal and MPs, were built using its existing sub-terminal infrastructure. Those systems are receiving a lot of attention as innovative systems in the industry because they can significantly increase the delivery throughput relative to investment costs.

An official from CJ Logistics said, “By continuing to be the first in the industry to adopt cutting-edge automation facilities, such as our Icheon MP hub terminal and MPs, we handle ever-increasing volumes of small-sized parcels efficiently. We will lead a paradigm shift in the parcel delivery industry through continuous investment and securing super-gap capabilities.”

Next
tvN’s You Quiz on the Block makes a remarkable turnaround to become a mega IP in just three years!

Previous
CJ Logistics’ delivery of overseas direct purchases grows 2.5 times with 6.53 million boxes delivered in 1st Half of the year