[Food is Science] Hetbahn Sotbahn rice strikes a balance between sterilization and quality!

"What? Hetbahn's changed?" Hetbahn Sotbahn was launched on July first, replacing the question mark of the previous sentence into an exclamation mark. Compared to the existing Hetbahn, both the content and the container have been upgraded, and the taste has been further improved. All this transformation has been made possible thanks to amazing technology! What is the technology used in Hetbahn Sotbahn, soon to deliver consumers’ joy and healthiness of eating rice in a new way?

Oh Ye-jin | Processed Rice and Grain Group
Leading global rice culture with a rice processing technology two steps ahead than other technologies of its kind.

Efforts to expand the amazing world of rice 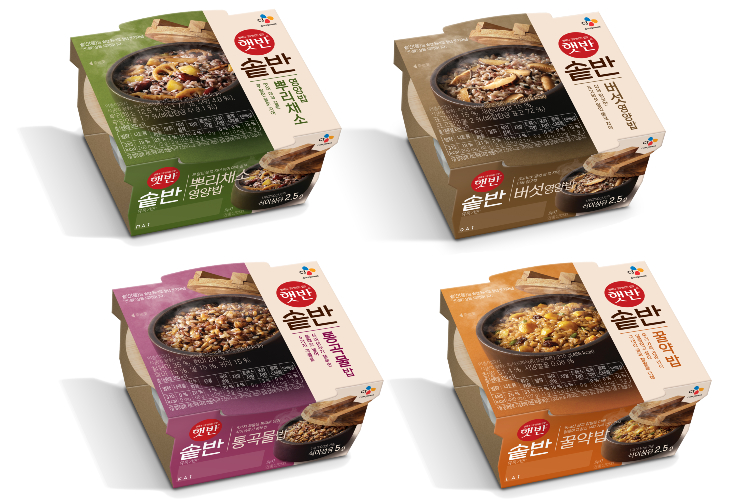 Rice is truly an amazing “platform.” You can make a decent meal in no time by simply adding a simple seasonal ingredient on commonly eaten white or multigrain rice. As such, it is a platform that can’t be found on the dining table. Just a quick internet search will reveal dozens of types of flavored cooked rice and pot rice, traditionally made in iron pots in Korea.

With the inexhaustible nature of the world of rice, it was natural from someone experienced in cooking rice to devise a way to enter that world. Since the launch of Hetbahn in 1996, there have been constant attempts to add more ingredients other than grains into Hetbahn’s container. I tried making nutritious rice or seasoned aster rice using the existing line of Hetbahn products, and I also tried using the retort process.

However, despite numerous attempts, the results were unsatisfactory, because the balance between sterilization and quality was not achieved. The distribution of instant rice at room temperature requires microbiological control at a sterile level, the most effective method for doing that using heat. However, over heating deteriorates the quality of instant rice. 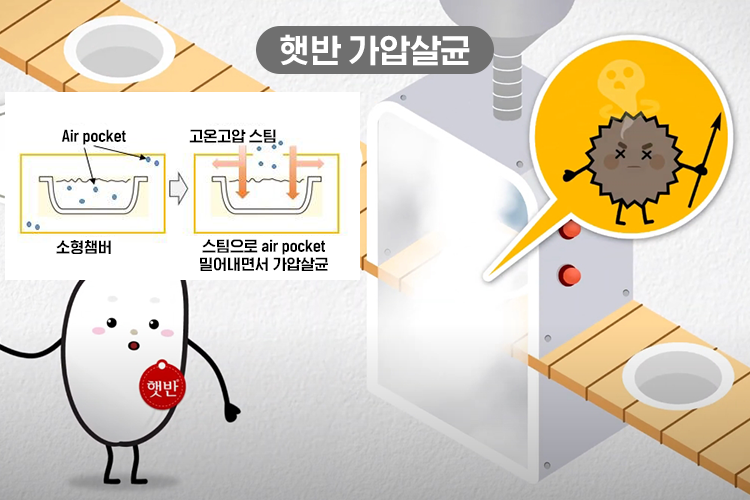 It is only natural for Koreans—for whom rice is a staple food—to be picky about the texture and color of rice. However, because rice has a light taste and aroma, a deterioration in quality is fatal. Therefore, it is necessary to rapidly transfer/diffuse a sufficient amount of heat to kill microorganisms throughout the product to prevent quality deterioration induced by further heat, but the existing Hetbahn and retort process each have limits in that regard

In Hetbahn's autoclaving process, high-temperature, high-pressure steam is sprayed instantaneously in a small chamber, thereby achieving rapid heat transfer as well as maintaining excellent quality. However, due to the limited heat treatment time, there is a limit of controlling microorganisms introduced from various non-grain supplementary ingredients. On the other hand, a retort pouch can deliver the desired amount of heat to the product, but the seal causes a low heat transfer rate, leading to inevitably excessive heat treatment to get the product to the cold point.

Air bubbles out! Technology for a balance of sterilization and quality 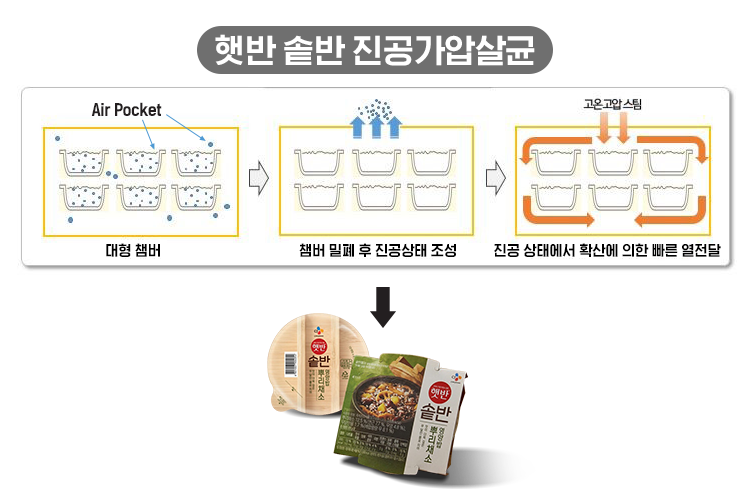 Autoclaving was eventually chosen as the method of sterilization after much consideration. The method, developed through continuous research and development for two years starting in 2016, enables rapid heat transfer as it treats unsealed products with high-temperature, high-pressure steam, such as in the case of Hetbahn's autoclaving. Because the method treats products in a vacuum state in a large chamber like retort pouches, sufficient heat treatment time can be secured as well.

In particular, creating a vacuum in the chamber before sterilization has become an innovative solution in terms of achieving the efficiency and homogeneity of heat transfer. There are air pockets inside the products and throughout the chamber to prevent the diffusion of steam. Just like bubble wrap that is attached to glass windows to provide insulation, small bubble-wrap-like air bubbles are hidden between the rice grains and in every corner of the chamber, blocking the diffusion of steam. However, when the inside of the sealed chamber becomes a vacuum, these air pockets get removed, enabling steam to diffuse evenly and rapidly into the product and throughout the entire chamber.

That was made possible by establishing new facilities, processes, and production lines for Hetbahn Sotbahn. As mentioned earlier, in the past, not only were there problems relating to even sterilization between the grains and the supplementary ingredients, but there was also the problem of the supplementary ingredients deforming or splattering when steam for sterilization was sprayed in the existing Hetbahn line. Due to such limitations of the line, a decision was made to change the process from scratch, resulting in the adoption of vacuum autoclaving, which strikes a balance between quality and optimal sterilization for rice and other ingredients. Compared to the products in the Hetbahn line, the creation of Hetbahn Sotbahn, which entailed the development of the aforementioned technology, was the most difficult task so far. 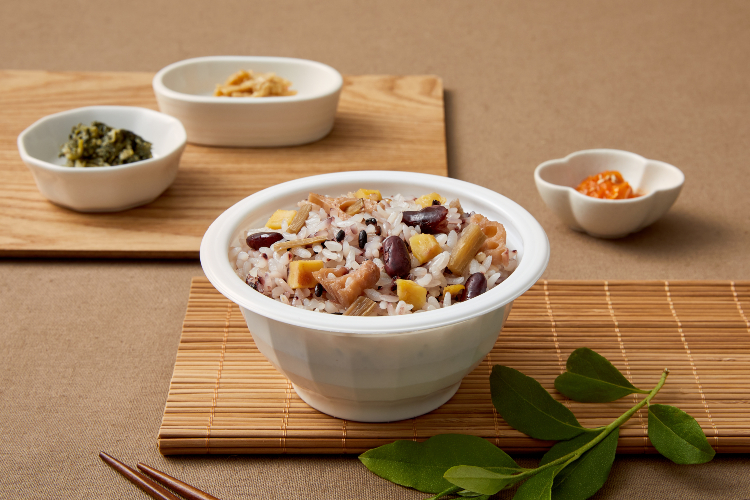 While the adoption of vacuum autoclaving resolved the problem of effectively sterilizing various non-grain raw ingredients , another unexpected difficulty was encountered during the mass production of Hetbahn Sotbahn : the large raw ingredients befitting the Korean name “sot” (iron pot) were used, there was trouble with putting them into the container.

Because raw ingredients were cut to reveal their original shapes, ensuring that the mushrooms were not mushy and the circular shape of the lotus root was left intact, they were large in size and frequently got stuck to the surface of the equipment. In other words, the conceited idea that we would be able to commercialize Hetbahn Sotbahn once we acquired the technology for sterilizing large raw ingredients made us pay dearly.

To resolve this problem, relevant departments brainstormed ideas such as establishing cutting specifications and dehydration conditions as well as mixing different types of raw ingredients, and repeated tests were conducted. Finally, we came up with standards for raw ingredients that can be added to the container, and we realized that putting the ingredients properly into the container itself is an attention-demanding part of the technology.

Hetbahn Sotbahn, which has finally debuted to the world after six years of technology development, is a precious product reflecting the intensive consideration and passion put into improving sterilization and quality and delivering a healthy taste. Personally, it was a valuable experience where I engaged not only in technology development but also in projects involving the creation of new facilities, processes and lines, increasing my capabilities in relevant areas. Here's hoping that Hetbahn Sotbahn, which was created with the sweat of farmers and the efforts of researchers, will be loved by consumers and will further raise the status of Hetbahn as pre-cooked rice enjoyed at home.

Next
In fifth year of the adoption of intelligent scanners (ITS), CJ Logistics leads the advancement of delivery services with 6.1 billion processed delivery packages