CJ Logistics will unveil 'Unbox-Sing,” a delivery service song intended for all south Korean nationals that conveys the excitement and joy of opening a delivery package (hereinafter referred to as “unboxing”). Digital copies of the song “Unbox-Sing” will be distributed free of charge to the public, so anyone can use it freely without concerns regarding copyright.

CJ Logistics will distribute the song, composed by indie band Garlixx, for free via its YouTube entertainment channel “Here Comes My Delivery Package” 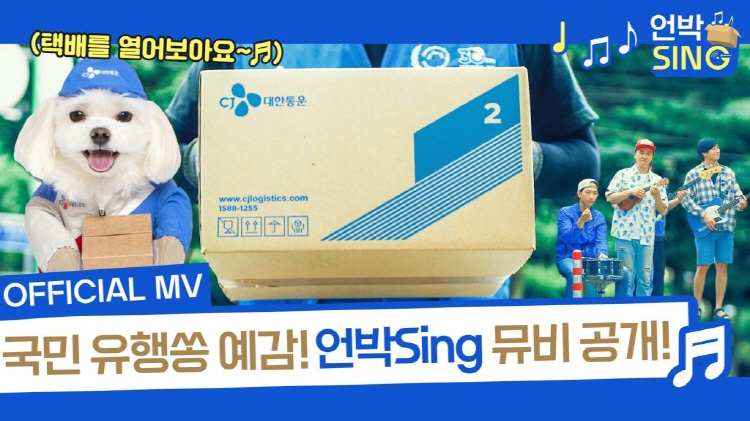 ▶ A still shot from the music video for “Unbox-Sing; Open That Exciting Package”

CJ Logistics announced on the 9th that it would be releasing digital copies of “Unbox-Sing,” a song intended for all South Korean nationals, which is about the excitement and joy of unboxing a package. The song “Unbox-Sing” was released along with a music video at 6pm on the 9th on CJ Logistics’ YouTube entertainment channel, “Here Comes My Delivery Package,” and can be downloaded for free from the channel.

“Unbox-Sing” is a fresh and lively acoustic song that conveys the emotions one can feel when unboxing a package that has been eagerly awaited. Featuring an addictive chorus that goes “Open That Exciting Package,” the song depicts the feeling of excitement and happiness with lyrics like “a small yet surefire happiness of my own”.

The song was released together with a funny music video that portrays the act of unboxing from the perspective of a delivery package and features a special appearance by “Kyung-tae” as a delivery driver.

The music video, released along with the song, humorously captures people receiving and unboxing delivery packages from the perspective of a delivery package. It conveys the importance and value of delivery services through the happy facial expressions of the people as they receive and unbox their packages. South Korea's nationally beloved dog 'Kyung-tae,” who has been appointed as an honorary delivery driver for CJ Logistics, also makes a special appearance in the music video.

'Unbox-Sing' was written and composed by indie band “Garlixx”. The band “Garlixx” has penned SK Telecom's famous commercial song “You're Handsome,” and all members of the band are veteran musicians who have been active in the music business for at least 10 years. Gyeong-jun Jeon, 38, who is the leader and vocalist of Garlixx, said, “I was able to increase my understanding of the delivery service industry by visiting freight terminals and meeting delivery drivers in person in the process of working on the music. The project was even more meaningful to me because I got to learn about the efforts of the many people and cutting-edge technology that are put into delivery services, which I previously thought of as involving just the simple process of ordering and receiving goods.”

Along with the free distribution of the song, CJ Logistics will be holding an event as well. You can participate in the event by uploading on YouTube or Instagram a video made using the song “Unbox-Sing” with the relevant hashtag. There are no restrictions on the format or the content for the videos, but you only need to use the song “Unbox-Sing,” e.g., dancing freely to the song or singing along to the song while opening your package. 10 of those who participate in the event will receive some magnificent gifts through a raffle, including an Apple watch, AirPods Pro and CJ gift certificates.

An official from CJ Logistics said, "'Unbox-Sing" was planned to express the value and meaning that delivery services add to everyday life. Through the song, which conveys the emotions of excitement, joy, and happiness one can feel upon receiving a package, we hope we can deliver a bright and positive image of delivery services to our customers.”

CJ Logistics' YouTube entertainment channel, “Here Comes My Delivery Package,” has been publishing web-based entertainment content since its launch in 2019 to give an easier understanding of the logistics industry, including delivery services, starting with ”Delivery Driver Dad with Multiple Children (1 million views)”. The content published via the channel has been gaining rapid popularity, having produced multiple trending videos on YouTube based on the strength of the diverse themes and cast member, including “Deliversulin Guide,” “Do Whatever You Want,” and “Delivery Intern Song-hee Bae”. Among them, “Deliversulin Guide” is attracting particular attention with win-win content that supports the sales of small businesses as well as delivery drivers because the show involves receiving and tasting food from various regional restaurants, which are difficult for viewers to visit personally due to the COVID-19 pandemic. In fact, the cumulative number of views for the show has exceeded 3 million, establishing it as the channel's bona fide representative content piece.

Next
Whether it's watching in person or watching from home, it’s joyful all the same! A night race featuring a variety of fun