2020 MAMA’ comes to an end amid the enthusiasm of music fans connected in over 200 regions around the world!

The global music awards hosted by CJ ENM, ‘2020 MAMA(Mnet ASIAN MUSIC AWARDS),’ transcended geographical and cultural barriers, and came to an end amid the enthusiasm of the excited music fans around the world.

‘2020 MAMA,’ which was held first as an untact event, turned a new page in the history of MAMA as the largest scale of the stage, the state-of-the-art performance technology and the amazing performance of the artists were combined. Fans could not be at the site in person, but it was great enough to be called a music festival that the entire world enjoyed together transcending the boundaries of space and time. As the main concept of this year’s MAMA is ‘NEW-TOPIA’, meaning a new world created by music, it is said to have been a festival where both artists and fans can communicate with each other through music and have a good time. 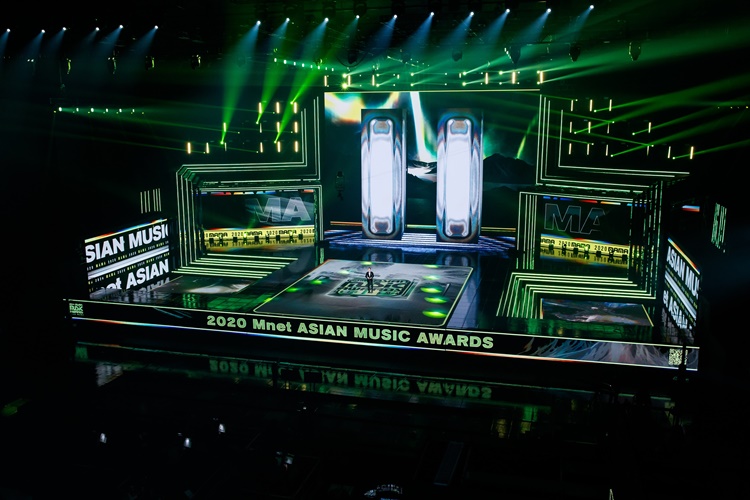 ‘2020 MAMA,’ which started at 6:00 pm yesterday (December 6), was broadcast live by Mnet and Olive at the same time. It was broadcast live in more than 200 regions around the world through Asian channels and platforms, e.g. Mnet Japan and tvN Asia, YouTube ‘Mnet K-POP’ and the ‘KCON official’ channel.

While MAMA was broadcast, it was ranked No. 1 in Twitter real-time trends, and swept the real-time trends in 68 regions around the world, such as the US, Japan, Brazil, the UK and Thailand. The cumulative number of votes, including the real-time votes received while the main ceremony was held, exceeded 530 million votes. Although the awards ceremony was held in Korea, the enthusiasm of the fans around the globe moved several continents at the same time, which is quite exceptional. 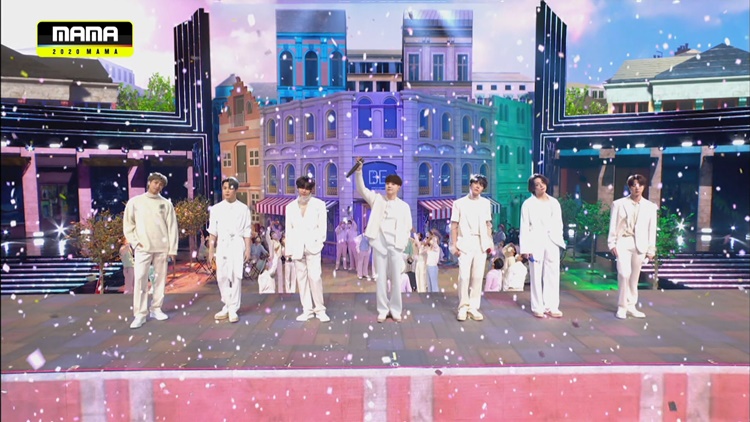 ▲The performance of 7-member BTS aided by the volumetric technology

‘2020 MAMA’ is said to have peaked among the stage productions of Mnet. It did not simply convert the offline awards ceremony into an untact format, but made various attempts that were possible as it was untact performance. They enriched the stage with cutting-edge technologies like AR (Augmented Reality) and XR (Extended Reality), and used various advanced technologies, including volumetrics which makes 3D images based on actual images, to present global fans with fantastic spectacles. In particular, the special graphics, applied to the performance of each artist at this MAMA, attracted popular attention. They presented a distinctive stage using different concepts and technologies in various places. To this end, they improved quality with 7 AR cameras, the largest number ever.

Electrifying performances continued one after another, such as the ‘Life Goes On’ stage of whole 7-member BTS which included Suga, who could not be physically present as he is recovering from shoulder surgery, the extraordinary performance of Twice on the virtual stage of XR Studio, which has never been seen before, and the new performance of Treasure based on the combination of robotic arms and the laser system.

A music festival where global stars and new artists performed together 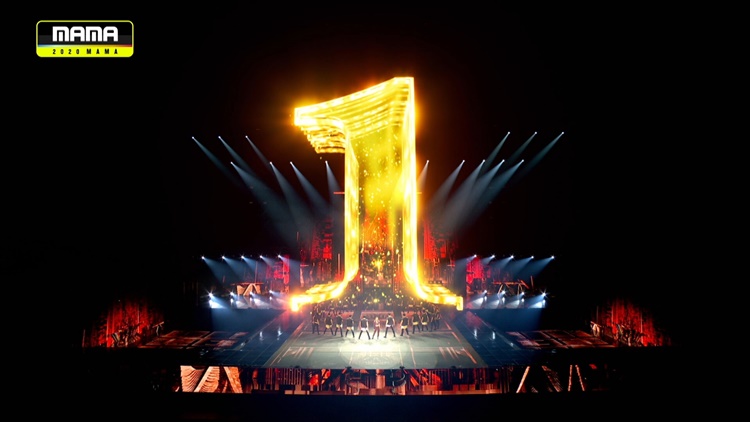 ▲The performance of BoA celebrating her 20th anniversary

As MAMA always presented fans with the best lineup of artists, ‘2020 MAMA’ also garnered a lot of attention starting with the announcement of artists who would perform. The lineup of all-star artists who took the stage yesterday clearly help to demonstrate its status as the best music awards ceremony. Artists who are loved by not only local fans, but also global fans, e.g. GOT7, JO1, NCT, The Boyz, Mamamoo, Monsta X, BTS, BoA, Seventeen, Stray Kids, IZ*ONE, ATEEZ, Enhypen, (G)I-DLE, Oh My Girl, Jessi, Cravity, Taemin, TOMORROW X TOGETHER, Treasure and TWICE, repaid the support of fans with amazing performances.

Also, the special stage that can be seen only at MAMA captured the eyes and ears of the fans. The special tribute to BoA, celebrating her 20th anniversary this year, which was prepared by younger female artists, the ‘Gang’ collaboration stage, prepared by the top girl crush duo Jessi and Hwasa, and the performance of Monsta X and Cravity who belong to the same agency pleased the fans. 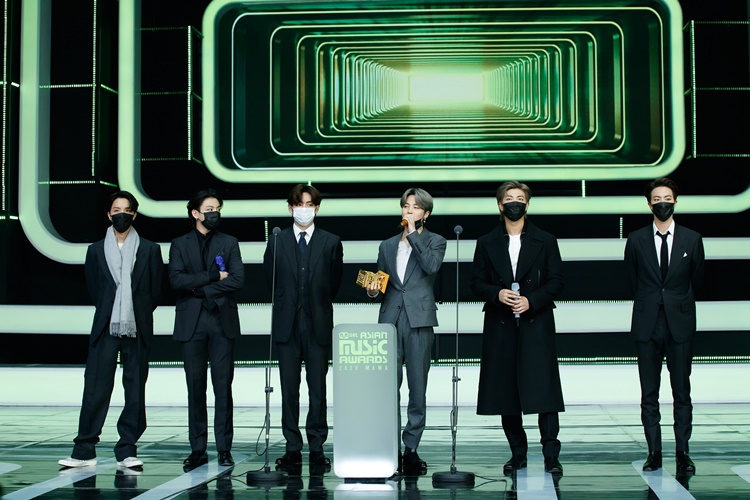 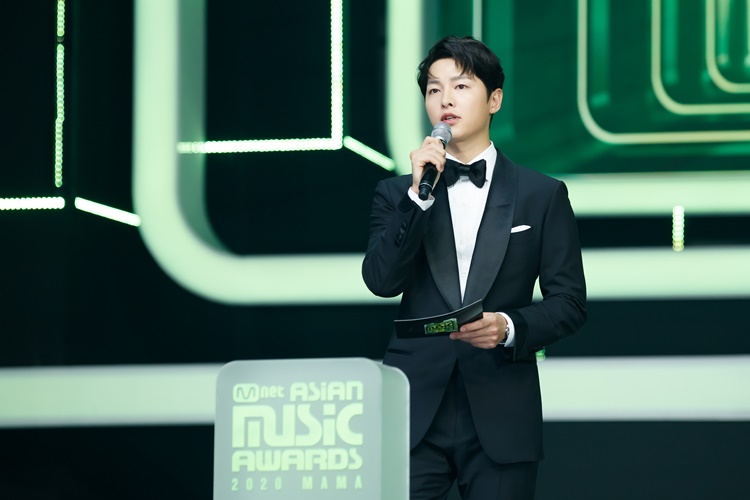 Giving awards to Asian musicians and specialists, MAMA is driving the growth of the Asian music industry

To increase the exchange of Asian music, MAMA has been giving Asian music awards since 2010. MAMA also handed out awards in 10 categories in a total of 5 regions, such as Japan, Mandarin, Thailand, Indonesia and Vietnam, this year to pay tribute to the performance of artists who have been outstanding in each region, and introduced various Asian artists to global fans.

MAMA also announced the awardees in special categories. The awards went to people in all areas who contributed to the development of the music industry in each Asian country. The ‘Best Executive Producer of the Year’ award went to Bang Si-hyuk, and PDOGG was honored as the ‘Best Producer,’ and Yovie Widianto was the ‘Best Composer.’ Koo Jong-pil and Kwon Nam-woo were named the ‘Best Engineers,’ and the ‘Best Video Director’ award went to Lumpens (Choi Yong-seok), and QUANG DANG received the ‘Best Choreographer’ award, and MU:E was honored as the ‘Best Art Director.’

MAMA is a global music awards ceremony in which CJ’s commitment to cultural projects and its continued efforts are integrated. It started out as the Mnet ‘Video Music Awards’ in 1999, and transformed itself into MAMA in 2009, and this year marked the 12th MAMA. It has many firsts: it was the first awards ceremony hosted by Korea that went global, and it was held in three Asian regions at the same time which was a first, and it was held in a dome concert hall also for the first time. It has evolved and developed repeatedly with many first attempts, and created a positive image of leadership. Beyond a simple year-end awards ceremony, MAMA became a music festival enjoyed by people around the world, a venue for the expansion of Asian popular music, and a global channel for communication. It is planning to make continued efforts to become the best in the world both in name and reality.

Next
Received a ‘presidential citation’ in Consumer Centered Management (CCM)