The New Normal of Concerts? Meet Lim Gyu-seok and Park Jin-hwa, the Producers behind KCON:TACT 2020 SUMMER

“Say Ho~!” “Ho~!!!” The biggest pleasure of attending a concert may be that you can savor the experience while breathing together with the musicians in the same place. However, the current circumstances have made it impossible to truly enjoy live music with others in physical spaces. KCON, the world's largest Korean Wave festival, found a solution online, and that's how an unprecedented concert festival that attracted 4.05 million fans around the world came to be. The success of the festival was possible thanks to the adventurous spirit of Lim Gyu-seok and Park Jin-hwa. 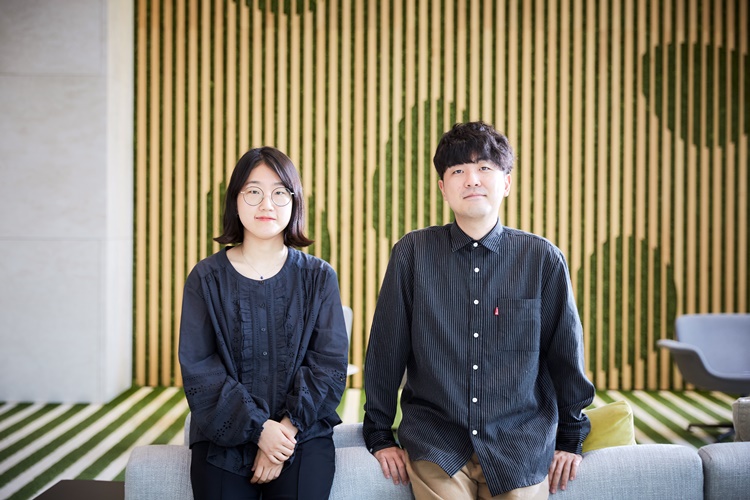 KCON is an occasion where you can witness K-pop artists' performances and the culture of the Korean Wave in a single place. Not only does KCON offer concerts where countless fans gather together to sing and sweat with musicians, but also fascinating pieces of K-culture that can be sampled in many other ways. Actually, K-culture is the biggest attraction of KCON. However, due to the unprecedented situated caused by the COVID-19 pandemic, people these days are very cautious when engaging in any face-to-face activities. Which begs the question, did KCON have to be postponed indefinitely? The answer is, it simply could not be.

As a result, KCON decided to hold the entire offline event online, and Lim Gyu-seok from KCON’s Convention Business Team and Park Jin-hwa from the T&A Business Division were tasked with that mission. And that was the very genesis of KCON:TACT 2020 SUMMER (hereinafter, “KCONTACT”), an ultra-large-scale concert festival that went on to be streamed worldwide for as long as 7 days, 24 hours a day, from June 20th to 26th.

What they put the most focus on when planning KCONTACT was creating a place where musicians and fans can meet and communicate with each other through the appreciation of K-culture, just like at physical concert venues. As a result, KCONTACT, which featured a total of 33 K-pop acts, was designed so that the participating musicians could see their fans via LED screens while performing, and a variety of features — such as one-to-one video chat sessions and KCON WISH, whereby fans have their wishes for participating musicians realized vicariously — were also incorporated into the event. 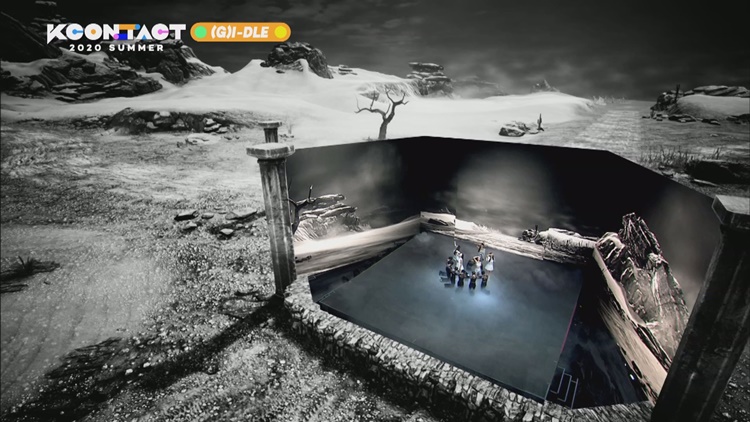 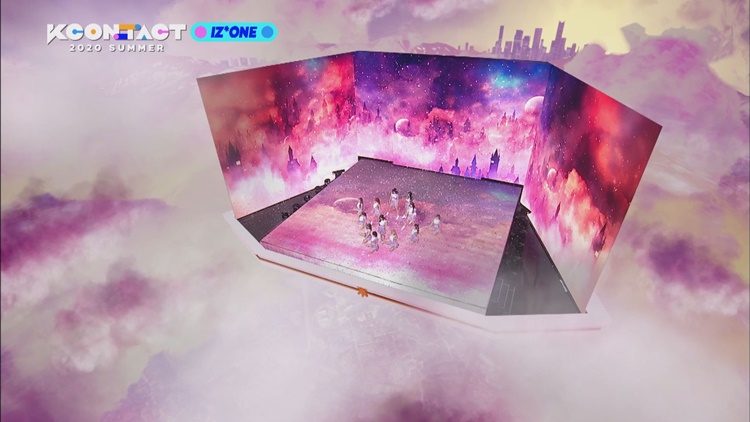 The aim of KCONTACT was to realize KCON online without losing anything of the original in-person experience, but it proved to be practically impossible to fully simulate the feeling of being physically there as well as attain the same degree of liveliness. However, there must be things that can be done only online. So, Park Jin-hwa sent the musicians to space, to the centers of cities, and to deserts; she made it look like, for instance, a musician was performing in the middle of a desert by synthesizing an actual physical space with man-made graphics using augmented reality (AR) technology.  The idea was to realize performance stages and performances, through the help of AR, that are not possible in real life. As such, she managed to produce dream-like performances that went well with the moods of the songs being sung, including IZ*ONE's performance on clouds and (G)I-DLE ‘s performance in a black-and-white desert.

The musicians, too, expressed satisfaction when they watched videos of their performances on AR stages. In fact, synthesizing an actual physical space with man-made graphics in a harmonious way is not easy by any means. So, she had to make extra effort in order to create a whole, seamless piece of imagery where stage effects such as lighting and mist are not obscured by the graphics, and she also had to meticulously check the condition of the equipment because four hours of concert performances had to be transmitted to the world during each day of the event. Because of these reasons, Park Jin-hwa found herself extremely nervous throughout the streaming of each performance. 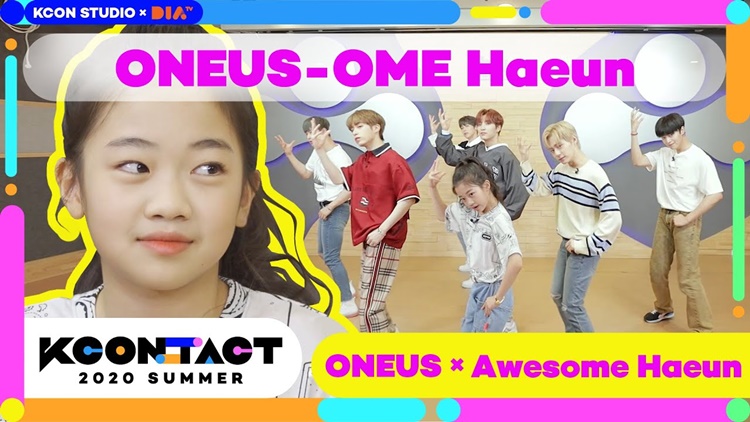 Lim Gyu-seok, who is in charge of handling convention-related matters in addition to concert-related ones, began preparing for KCON in January. Because he had no experience in holding KCON online despite having held the festival offline for the last 10 years or so, he had to prepare everything from scratch. The teams involved in the hosting of KCON, which have been grouped by country, also put their heads together to realize KCONTACT. First and foremost, the most important of all was to make content suitable for an online presentation and make it something that audiences could appreciate.

In the previous installments of KCON, concertgoers were able to experience Korean culture first-hand and browse products from South Korea’s differing companies of all sizes. However, with such first-hand experiences unavailable at the new, online installment of the festival, they came up with new programs, including one where musicians eat food in the stead of viewers and one where famous YouTube creators create content together with musicians. And that gave rise to KCON Studio. He said that he planned a studio with a mindset that says, “I went to the trouble of preparing all manner of things to be responsive to your interests.” The creations born out of KCON Studio after such contemplation include a video where Grandma Park Makrye learns dance moves from the recently debuted TOO and a video where YouTube creator “ssin” examines what is in EVERGLOW members’ pouches 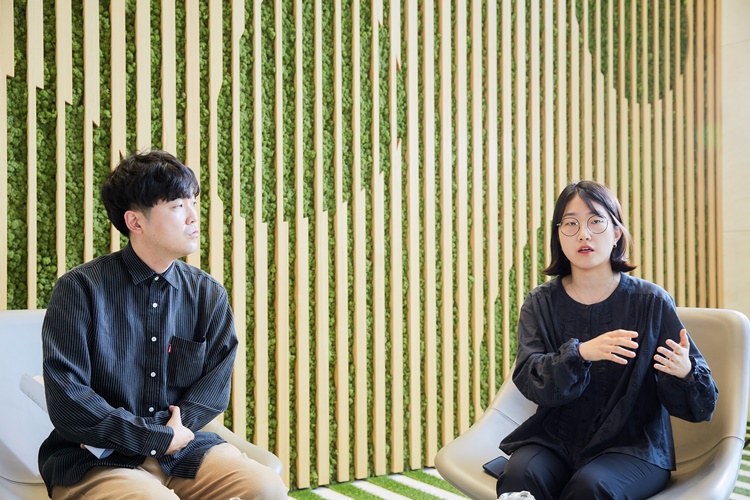 KCONTACT, born as a result of hundreds of people striving for more than six months, was watched by a total of 4.05 million fans in 153 countries. This number is 3.5 times higher than the cumulative number of visitors to the festival's 24 offline installments over the past 8 years, 1.1 million. KCONTACT has provided a valuable experience to K-pop fans who haven’t been able to enjoy KCON in person, because the festival has never taken place in their own countries, or because they were unable to get ahold of tickets.

KCONTACT has proven to a festival with significant meaning not only for audience members, but also for the participating musicians. In particular, ”CRAVITY,” who made their debut this year, were able to engage with their fans for the first time through their performance at KCONTACT. They are even said to have shed tears after witnessing first-hand that so many of their fans were watching them. Lim Gyu-seok and Park Jin-hwa said that because everything was new to them, they had to stay on alert from the planning stage to the end of the festival, adding that their work for the festival gave them the greatest sense of pride in their lives, having learned that fans and musicians can sufficiently communicate with each other even through online platforms. 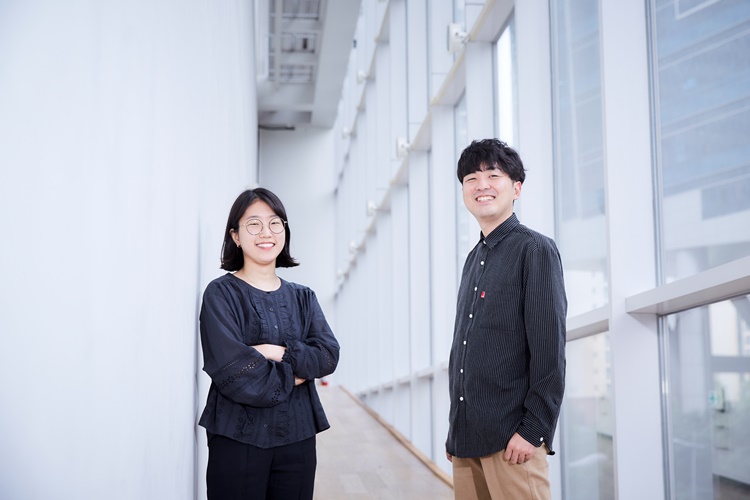 KCONTACT was a new challenge not only for Lim Gyu-seok and Park Jin-hwa, but also for all other people who were involved in its preparation. Accordingly, they said they felt a great sense of fulfillment when the event concluded without having faced any notable accidents. Now that they have shown us new possibilities for concerts and conventions, we can’t help but wonder what their future plans are.

“Rather than letting KCONTACT fold as a one-off event, we plan to show more diverse aspects through the festival so that it would remain consistently popular on the strength of its online content.”

“We will make further efforts to deliver more dynamic performances by realizing things that have heretofore been not possible offline using new technologies.”

KCON serves not only as a perfect opportunity for K-pop fans to meet their favorite musicians but also as a pathway from them to escape from the mundanity of everyday life for a short while. With KCON unable to offer such functions under current circumstances, KCONTACT has opened up a meeting place for musicians and fans alike where they can be together for 7 days, 24 hours a day, albeit from a physical distance. Here’s hoping that we will continue to experience the joy of watching performances — if not in the flesh — via online platforms, transcending the physical distance.