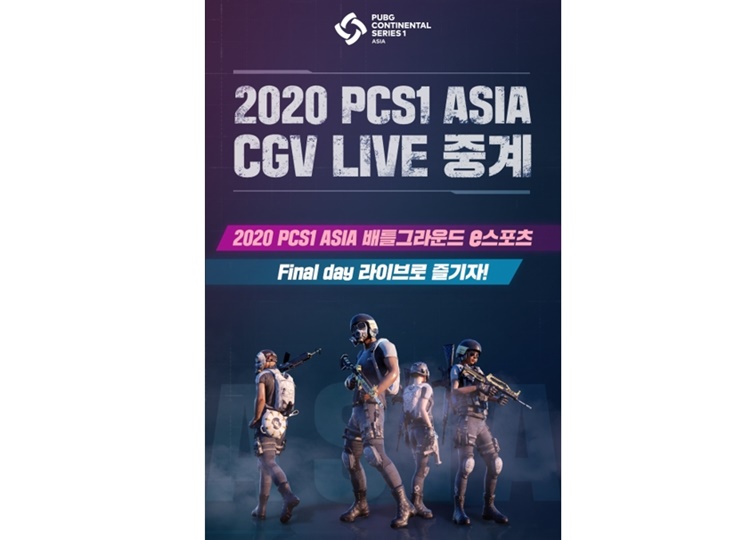 CJ CGV will be broadcasting the Asia edition of the PUBG Continental Series 1 (hereinafter, “PCS1”), a global e-sports competition for the game “PlayerUnknown's Battlegrounds” (hereinafter, “battlegrounds”), which is set to take place on July 5. This is an opportunity to watch Battlegrounds players compete against each other on the big screen with vivid imagery and lively sound.

From South Korea, six teams are participating and are delivering good results in the current installment of the competition: GRIFFIN, VSG and OGN ENTUS, who have earned their tickets to PCS1 Asia 2020 through a preliminary tournament, and the top-three ranked South Korean teams in PCS ASIA Charity Showdown, namely Team Quadro, Gen.G and ELEMENT MYSTIC. The rest of the participating Asian teams are: six teams from China (Luminous Stars, Lao Yue Gou, Tianba, Infantry, Four Angry Men and RushB), two teams from Japan (Crest Gaming Xanadu and ELEMENT.36) and two teams from Chinese Taipei (Global Esports Xsset and Team Curson).

The live broadcast scheduled to take place on July 5—the last day of the competition when the winning team will be determined— will commence at 7 PM on the day at CGV Gangnam, Gwangju Terminal, Daegu, Suwon, Wangsimni, Yongsan, and Seomyeon. Those who want to watch the match can book their tickets through the CGV website or mobile app. Tickets are KRW 15,000, and each person who visits CJ CGV to watch the PCS1 Asia 2020 live broadcast will be given a coupon for the “PCS1 Combat Set,” a special PCS1 in-game item.

Next
Bibigo Mandu is No.1 on JD.com! CJ CheilJedang boosts online business in China

Previous
KCON:TACT 2020 SUMMER, an Online K-Culture Festival with 4.05 Million People from 150 Regions of the World in Attendance