- CJ Logistics has been selected as an operator for South Korea’s Ministry of Trade, Industry and Energy's national project the “Robot Industry Core Technology Development Project”.

- Through the realization of state-of-the-art logistics centers where robots work like humans, CJ Logistics seeks, too, to unman the exportation of K-products. 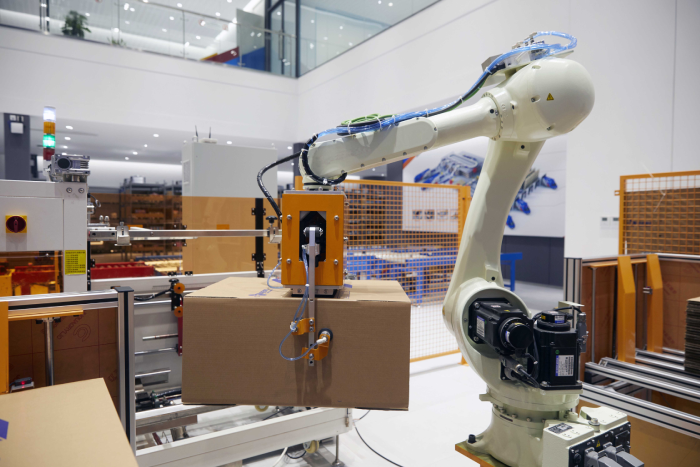 On the 4th, CJ Logistics announced that it had signed an MoU for South Korea’s Ministry of Trade, Industry and Energy's national project the “Robot Industry Core Technology Development Project,” after having been successfully selected as an operator. The MoU was conducted online with the Korea Evaluation Institute of Industrial Technology and CJ Logistics signing a digital form of the MoU.

First, the task of developing unloading automation technology will be carried out with the aim of developing and applying on-site an unloading automation system that is capable of recognizing, picking and transporting various types of cargo stacked in bulk on intercity trucks, including boxes, plastic pouches and sacks. The development of unloading automation technology is scheduled to be completed by December 31, 2024. Supervised by STC Engineering, the R&D task will be conducted jointly by CJ Logistics and Sungkyunkwan University, where they will develop a robotic system, decompression gripper technology, etc.

The task of developing robot-assisted palletizing technology, on the other hand, aims to develop technology that increases sorting operation rates and optimizes the operation of logistics centers by unmanning the processes, using robots and robot vision to perform the task of stacking boxes on pallets, which is traditionally carried out manually. The technology is scheduled to be developed by December 31, 2022. Supervised by CNI Inc., the task will be conducted jointly by Gachisoft Inc., Sungkyunkwan University and CJ Logistics, where they will develop a robot-assisted palletizing system, related algorithms, grippers, etc.

For the development of the systems and equipment, CJ Logistics will conduct simulations and on-site tests in conjunction with the other entities at various logistics centers and will also be in charge of accelerating the on-site adoption of the developed systems and equipment and increasing their effectiveness. The developed technologies will first be adopted by CJ Logistics' logistics centers, and plans will also be made to spread those technologies to global courier business sites overseas later on.

Loading and unloading packages and stacking boxes on pallets, which are the simplest and most repetitive tasks at a logistics center, have long been regarded as tasks that most urgently need to be replaced by robots. Therefore, if these technology development tasks are successfully carried out, it will be the first case of robots replacing high-intensity on-site logistics tasks

CJ Logistics' TES Logistics Technology R&D Center director Kim Kyung-hoon said, “By realizing logistics centers where people, robots and systems can coexist safely, we will create a logistics environment where people can work humanely while still achieving a high level of efficiency. We will build CJ Logistics into a company armed with great technologies, whereby robots work like humans and future events are forecast based on data.”

Previous
We Achieved a Warehousing Revolution Based on Asia’s Largest Courier Service Infrastructure.