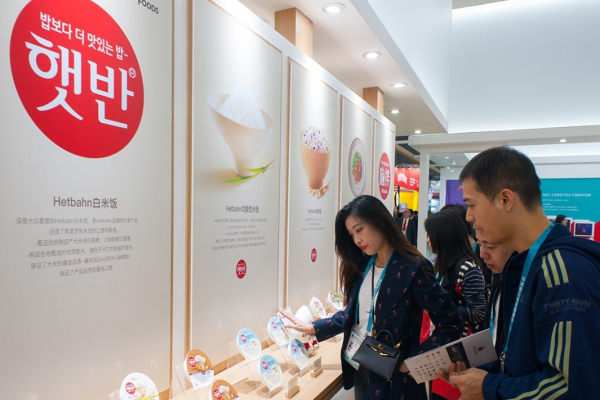 CJ CheilJedang participated in the 2nd China International Import Expo (CIIE) held at the National Exhibition and Convention Center (NECC) in Shanghai, China until the 10th. At the expo, CJ CheilJedang ran a large promotion booth where it promoted its iconic brands such as bibigo and Hetbahn.

The China International Import Expo, held for the first time last year, is a national-scale event hosted jointly by China’s Ministry of Commerce and the Shanghai Municipal People's Government. At CIIE, exhibition booths with diverse themes ranging from food to automobiles to clothing are run by foreign companies. The 2nd edition of CIIE took place for 6 days from November 5 to 10, with some 3,700 companies from more than 150 countries participating.

At the 2nd edition of CIIE, CJ CheilJedang ran a bibigo zone and a Hetbahn zone at a CJ Group booth at at the National Exhibition and Convention Center. In the two zones, separate tasting tables were set up for visitors to taste free samples of CJ CheilJedang's products. Each zone featured the brand's distinguished products and offered videos showing the production processes for the products. The tasting event, which took place for six days, offered 1,350 free samples of products including bibigo Korean Royal Court Dumplings, Hetbahn Cupbahn Cooked White Rice with Stir-Fried Kimchi, and Hetbahn Cupbahn Cooked White Rice with Yellow Cream Curry.

In the Hetbahn zone, CJ CheilJedang introduced the Hetbahn brand and offered many things to see, including various Hetbahn products and related videos, so the visitors to the zone could feel the comfort and intimacy of home meals. In addition, through a video disclosing three secrets of Hetbahn (its taste, safety of its container, and its non-use of any preservatives), CJ CheilJedang also provided the visitors with the opportunity to indirectly experience its own unrivaled distinguished food manufacturing technology.

A CJ CheilJedang official said, “We have increased the proportion of the CJ Group booth—which was only 30-40% last year—to 80%, and we are focusing our efforts on local promotional activities aimed at Chinese consumers. Going forward, we will take the lead in promoting Korea’s food culture centering on our representative brands such as bibigo and Hetbahn.

Meanwhile, the sales of bibigo dumplings in China have been continuing to grow, from about 7 billion KRW in 2015 when it was initially launched in China to 50 billion KRW last year. This past May, CJ CheilJedang officially launched Hetbahn in China, embarking on selling the product to the entire Chinese population. (End)