Mugwort soup, sea squirt sprout bibimbap, redolent of the sea, and aralia sprout tteok-galbi, which is minced beef wrapped around aralia sprouts, an ingredient only available to eat in the spring… Sounds like a traditional Korean table d'hote to you? No! These are actually HMR products that were released into the market by CJ CheilJedang's meal kit brand COOKIT. With COOKIT, you can have a variety of dishes prepared with fresh ingredients delivered to your door and cook them with ease at home. How did this even become possible?

A cooking novice can become a cooking master? The word "meal kit" refers to a kit containing a meal with prepared ingredients and sauces for easy cooking. With an increase in the number of consumers who crave home meals cooked with care, the meal kit market is estimated to grow to be worth as much as 40 billion KRW this year, and in the next five years, the market is expected to reach 700 billion KRW. In step with that, CJ CheilJedang launched into the market a meal kit brand called COOKIT at the end of this April. Not only does COOKIT offer you a specialty-restaurant-level variety of prepared meals which you can have delivered to your desired place at your desired date from CJ On Mart, but it also brings to you fresh ingredients, meat, fish, broth, sauces, etc. in the morning of the day specified, along with recipes created by professional chefs. To cook a COOKIT meal, you only need to put the prepared ingredients in boiling water or in a heated frying pan in the order shown in the recipe. With COOKIT, even a cooking novice can be able to cook a high-quality meal like a cooking master in just 30 minutes. ▲ We've come up with a lot of products to suit everyone's taste; various food products from meal kit brand COOKIT

The varied food products released by COOKIT are created like this: first, the Menu Selection Committee selects menu items, and then professional chefs develop recipes for them. It is the Meal Kit Team's mission to faithfully embody the taste of the food cooked by a chef, however or wherever the COOKIT dish is cooked. The main task of the research and development team for COOKIT was to keep fresh the components of kits, which have already been washed and cleaned. To that end, CJ CheilJedang Food R&D Center chief researcher Hyun-seok Na tested all available research methods.

After majoring in post-harvest management at Seoul National University's Department of Plant Science and Technology, chief researcher Hyun-seok Na built a career working in the fields of fresh vegetable preprocessing technology and frozen vegetable development, and then in 2010, he conducted plant factory research at CJ CheilJedang Food R&D Center. Then, in the midst of his research activities, in January last year, he organized a professional team with the aim of presenting special home meals as meal kits.

The gist of COOKIT is the freshness of the vegetables! Chief researcher Hyun-seok Na was clearly best suited for the role of supervisor for the research and development for COOKIT as he had been solely dedicated to the research of food freshness and preprocessing for 17 years. Afterwards, CJ CheilJedang Food R&D Center researchers specializing in the fisheries and livestock industries joined forces to provide support to the research and development for COOKIT.

What is the secret to the freshness of the meal kit COOKIT? The research for COOKIT is not that much different from the ones that CJ CheilJedang has so far presented. However, it is his duty to utilize pre-completed research as efficiently and effectively as possible. For the process-specific upgrading of research and development, chief researcher Hyun-seok Na set a principle of "keeping to the basics." 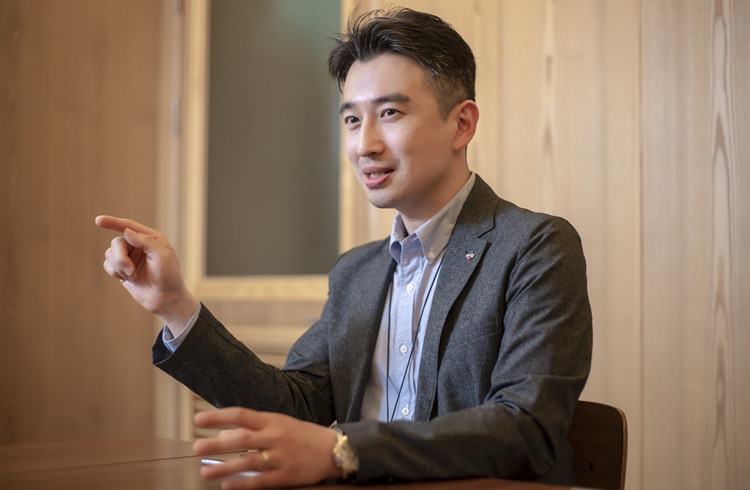 ▲ What method did he choose to retain the freshness of COOKIT?

When a person has accumulated sufficient enough experience in an area to claim to have some expertise in the area, the person could nevertheless bungle their job occasionally by missing out on the most essential things. In his 17th year as a chief researcher, Na said that he paid particular attention to temperature management, a basic element of research of this kind, when developing COOKIT as he had witnessed numerous such instances. For retaining the freshness of the vegetables after their harvest, he decided to apply the cold chain method whereby the temperature of the raw ingredients is lowered during their distribution. As a result, COOKIT meals retain their freshness for as long as six days.

A COOKIT product can consist of as many as 15 components. He and his team develop five menu items a week on average, which means the number of the components they need to check in a given week is about 70. Consistent, careful attention and thorough inspection are musts because the research and development for and the packaging of a product are carried out simultaneously. As much as he is consistently careful and thorough, he said there was an occasion that startled him big time; while conducting the final inspection of a product that had produced as a pilot, he found out that a component was missing when he opened the product.

"I was so worried that I broke out in a cold sweat!"

He said that he broke out in a cold sweat upon finding it out as he knew more than anyone that the omission of a component, even as small as 10g of sesame oil, can drastically alter the taste of the product. He added that consequently and he built an internal system so that such faults would never occur again in the future, which he checks for faults on a regular basis.

He said that because he put so much effort into developing COOKIT, he was overcome with worry ahead of its release about whether it could satisfy consumers. When COOKIT was first being sold to CJ CheilJedang's employees, he personally purchased COOKIT meals and gave them to his parents, the consumers closest to him. He said that his mother, who had been making home meals for his father for decades and had recently been finding herself having difficulty in cooking, told him that COOKIT had made cooking much easier for her. Contrary to his expectation that his parents would rate COOKIT coldly, his parents gave it a favorable rating, which he said made him convinced about releasing COOKIT into the market. What makes this convenient system possible, whereby you can choose from a total of 15 permanent menu items for the duration of four weeks and have any of them delivered to your door upon specifying a delivery date? Chief research Hyun-seok Na said that the reason is close cooperation between CJ’s affiliates; when CJ CheilJedang creates based on its technology the best quality products using fresh ingredients supplied by CJ Freshway, CJ Logistics delivers them at dawn. He explained that they were able to build the system because there was a shared idea that COOKIT is a meaningful project that goes beyond the expansion of HMR and takes charge of the future of food.

Are COOKIT meals for single-person families also going to be released?

Meal kit COOKIT makes it possible for people to cook dishes whose tastes do not pale in comparison with those served at specialty restaurants, by just performing a simple cooking process. COOKIT has piqued the interest of modern people who seek the pleasure of eating food, and although only two weeks have passed since its release, its sales have been increasing explosively. One of the attractions of COOKIT is that you can have the fun of eating a variety of dishes for four weeks by choosing from among 15 dishes created by the best chefs. Then, what new dishes will the meal kit brand COOKIT present us with in the future? "We are planning to launch more than 110 new products this year to offer a more diverse range of tastes."

Chief researcher Hyun-seok Na also revealed the plan to actively accommodate feedback from customers who bought COOKIT products and to improve the taste quality of COOKIT products. He also added that CJ CheilJedang plans to expand the target demographic of COOKIT, which is currently intended for two-to-three-person families, to include single-person families by releasing meal kits for single person use and that in addition to the development of COOKIT products, CJ CheilJedang is also developing hyper-differentiated, unrivaled technology with a view to applying its distinguished research methods.

Meeting with chief researcher Hyun-seok Na reaffirmed for us that behind COOKIT's simple cooking process, there were the efforts of many people, including Na himself. Having heard from him that most Korean dishes would be available as COOKIT meals in three years from now, we felt pleasant imagining the future when we can eat COOKIT meals for all three of our daily meals.