CJ CGV’s proprietary screening technology was highlighted once again as the post-model that will lead global trends. 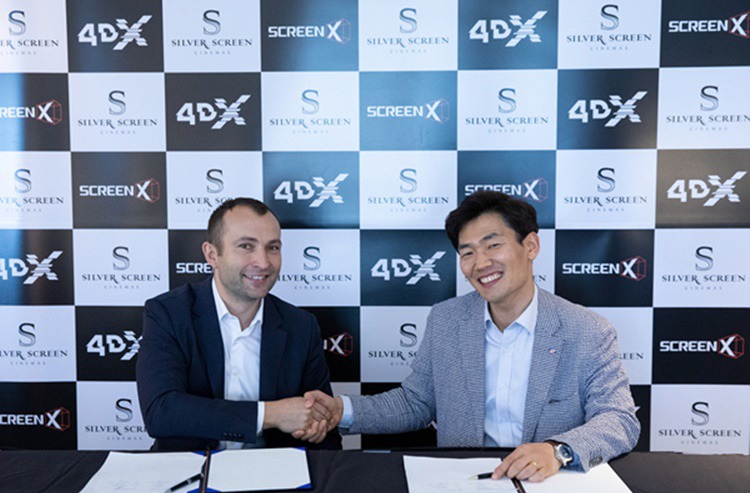 CJ CGV (CEO Choi Byunghwan) revealed on the 9th that it entered into the most-ever number of new contracts with nine global theater companies after its attendance from the 1st to 4th (local time) at the largest industry convention for movies, ‘CinemaCon 2019’, suggesting a new paradigm of the global theater business. Four attractions with ‘4DX with Screen X’ and ‘4DX VR’ technologies, such as ‘4DX Recliner’ and ‘4DX Flying Cinema’, were featured at the CGV booth. Every day, the CGV booth was packed with attendees thanks to the high level of interest in the cutting edge screening technology. The 4DX Recliner offers comfort and stimulation of the five senses by simply adding a 4DX motion base to existing recliner seats in a theater, and its ease of installation resulted in a series of inquiries. 4DX Flying Cinema, debuted as a prototype, offered a new direction for the future generation of theaters, drawing attention from attendees.

The focused attention at CinemaCon led to the signing of new contracts with nine global theater businesses. 4DX, the special theater that represents CJ CGV: Screen X, the special multi-screen theater: and the integrated 4DX with Screen X were expanded into one country in Europe, two countries in North America, three countries in Latin America, and one country each in Asia, Middle East, and the CIS region. Of them, Germany and Belarus join as the newly expanded client countries. The expansion into Germany, in particular, has great significance as a symbolic entry point into further European expansion. CJ 4DPLEX, A subsidiary of CJ CGV, has agreed to cooperate with Cineplex Germany, the largest theater business in Germany, to open its first 4DX theater in Germany and to further expand into 25 Europeans countries. It is expected to be a turning point in conveying the charm of the Korean-style theaters to the German theater industry and laying the foundations for the next-generation movie theater. Kim Ludolf Koch, Cineplex's CEO in Germany, said, "We expect the 4DX's outstanding viewing experience to really wow our audience."

4DX's expansion in the Middle East and South American markets is also of great interest. By partnering with the Saudi Arabian theater business, Empire Cinemas, ten new 4DX theaters will be newly introduced in Saudi Arabia by 2023. Cinepolis, the world's fourth-largest theater business, has signed an agreement to expand their offering of 4DX and ScreenX, including the installation of 4DX with ScreenX, based on the partnership since 2011. As well as showcasing the first integrated theater in Latin America, two ScreenX theaters and four 4DX theaters will be expanded in the US and Latin America.

The agreement to implement 4DX and ScreenX at the same time is also a notable result. CJ CGV has signed a partnership with Silver Screen, Belarus' largest theater business, to install a total of six new 4DX and ScreenX theaters. "I was deeply impressed by recent theaters operated by CJ CGV," Aleksei Malaichuk, CEO of Silver Screen, said. "I hope to provide Silver Screen's moviegoers with a whole new experience by debuting 4DX, which will lead the future of the theater industry," he added. With India's leading theater business, PVR, ten ScreenX theaters are planned to open by 2021. Also entering into a partnership is CinePlanet, which will sequentially adopt three ScreenX theaters in Chile and Peru within 2019.

Kim Jongyeol, CJ CGV Director of Innovation, said “the time is right for the world to watch CGV's own competitiveness against giant culture companies in the global arena,” and revealed, "I am proud of the creative technology from Korea that is shouldering the weight of ensuring the future innovation of the global theater industry…In order to meet expectations, CGV will continue with its evolution, proving the best cinematic experience to global audiences,” he concluded.