Why did a chef, who studied abroad, choose to work for a movie theater? Lee graduated from the famed French cooking school ‘Le Cordon Bleu,’ and worked at Hotel Ambassador in France and Westin Chosun Hotel in Korea before joining CJ CGV in 2010. I was wondering why he turned down famous hotels which could have helped him make his name known as a chef, and instead came to CJ CGV.

"I thought it would be fun if I could mix food and entertainment. So I came to CJ CGV."

CJ CGV F&B Business Team oversees the planning, development, marketing and promotion of all foods, beverages and products sold at CJ CGV. How is CJ CGV different from other movie theater chains? It has acclaimed talent like Lee who plans and develops differentiated products! Unlike most movie theater operators at home and abroad who sell the usual concession stand fare supplied by others, at CJ CGV, home to Lee who is the only movie theater concession stand menu developer in Korea, is making delicious concoctions independently. Thus, making him indispensable to CJ CGV.

Over the years, CJ CGV diversified its menu offerings by launching various choices together with Lee so that people can enjoy different kinds of food at movie theaters. As for its representative products, CJ CGV started with gourmet popcorn, which triggered the premium popcorn culture, in 2012, and collaborated with Jaws Food to launch fried vegetables and rabokki (rice cake with ramen noodles), and joined hands with School Food to launch the iconic ‘Mozzarella Spam Egg Mari’ in the form of frozen gimbap for the first time in the world.

Why is popcorn becoming tastier? 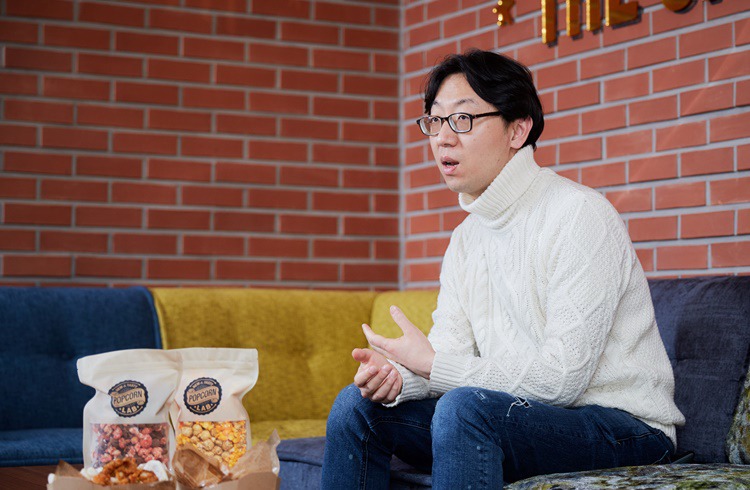 The first attempt at an off-beat menu feature was popcorn. His brand of popcorn, which can be called his first finished product, started with the upgrade research on popcorn taste. He continuously conducted research efforts to make a product tastier than conventional popcorn. He personally tasted all domestic and foreign popcorn sold in Korea, and popped popcorn with various kinds of corn. That was not all. To add a savory flavor to popcorn, he used coconut oil, which is 30% more expensive than palm oil.

He had to push himself harder to develop the gourmet popcorn, which can be said to be the next step. He used a variety of raw ingredients, such as cheese and chocolate, on the surface of popcorn. When the heat was applied, they melted right away. To make up for this drawback, Lee even made a showcase for controlling temperature and humidity at the same time. He worked day and night to develop the product, but he could not launch it right away. It was more difficult and costlier to make and more difficult to handle than existing popcorn. But he could not give up. He was focused on the notion of taste to persuade many people.

"I studied the traffic flow of executives, and strategically placed the gourmet popcorn. They tried it one after another. They said it was delicious, and gave me a chance to sell it." ▲ ‘I didn’t know what you will like. So I prepared everything!’ The gourmet popcorn available only at CJ CGV

At last, the gourmet popcorn was launched in 2012, and it worked. Customers can select the premium popcorn they like, and it really resonated with them. To eat the gourmet popcorn, some customers visited CJ CGV or had it delivered to them. CJ CGV used ‘Popcorn Factory’ as the name instead of the ‘concession stand,’ and a new popcorn culture was born for the first time in Korea. ▲ Before the launch of a new product, food tasting is a must!

As expected, all popcorn concoctions were not successful. About 4 years ago, there was a wasabi craze. Lee decided to make wasabi popcorn. To find an ingredient with a wasabi flavor, he searched everywhere from Asia to Europe. The wasabi popcorn was received very positively within the company itself. In the last customer food tasting session, he heard some heartbreaking feedback that the green color of the wasabi popcorn looked like green mold. He was shocked and gave it up.

When CJ CGV began to sell the shake popcorn on which 7 seasonings, including the mango flavor and hot and spicy flavor, are sprinkled, customer reactions were worse than expected. So he had to also give up selling this product. What was the lesson he received from failures? It was that when you hear the product name and imagine the taste, you should ‘feel like eating it.’ What enabled Lee to keep pushing forward despite repeated failures was CJ CGV’s unsparing support.

Chicken at a movie theater? Korean-style concession stand menu features are an on-going process!!
CJ CGV and Lee’s challenges are not limited to popcorn. He noted that the menus of movie theaters around the world are limited to American fare like popcorn, soft drinks and hotdogs, and decided to develop Korean-style concession stand offerings that Korean customers will prefer.

"I re-defined the food Koreans like as ‘Korean-style concession stand menu selections,’ and I developed chicken and flour-based food, the most favorite among Koreans, in a way that is best suited for the atmosphere of movie theaters." 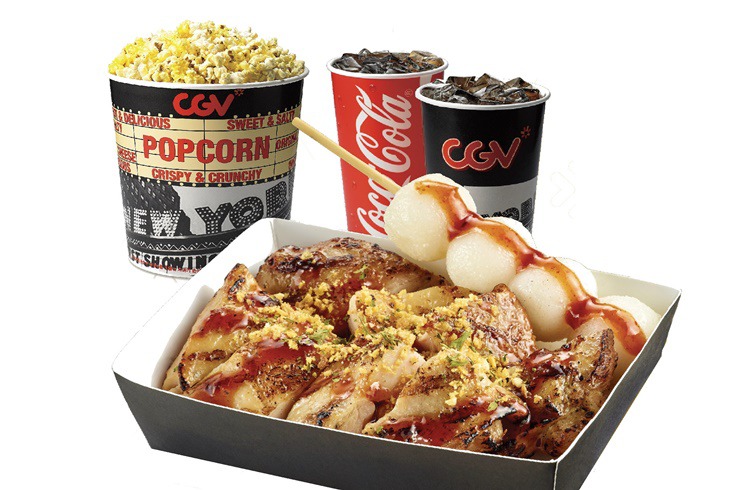 This is how the ‘BBQ flame-grilled chicken’ came about. The idea was good, but it was not easy to translate it into reality. In particular, the biggest obstacle is capturing the unique smell of chicken. He had to consider a way to make it easier to consume. Not wanting to sacrifice taste, he chose to flame-grill the chicken instead of adding the smoking agent to the chicken. Also, if the menu selection has all boneless chicken, the texture of the chicken may be underwhelming. So he added rice cake skewers. When the final product was made after 14 months from product planning to launch, he says he felt most rewarded.

After premiering the BBQ flame-grilled chicken at 15 stores under direct management around the country, he is planning to bring it to all directly-managed movie theaters at the end of March. Also, as part of its effort to ensure win-win relationships with local communities, CGV is also selling its ‘Chuncheon chicken ribs.’ CGV says it will introduce a secret Korean-style menu feature each year. My mind is already wondering what new product will be launched next year. 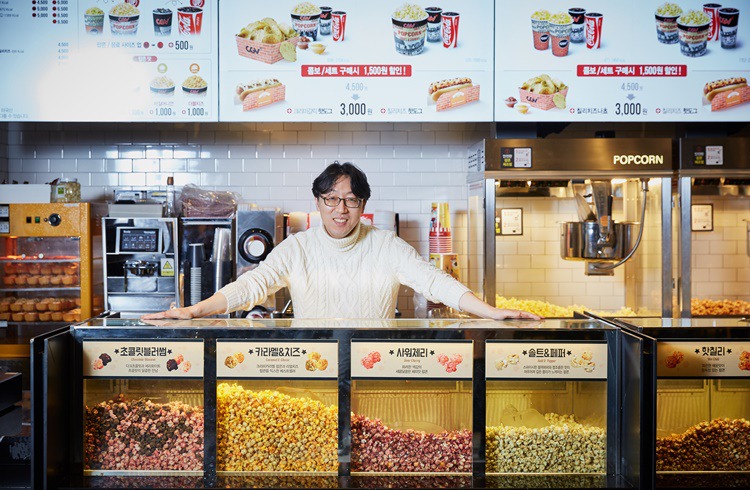 We will give deep consideration and make bold efforts to realize products that will satisfy customers even more.

Breaking the stereotype of concession stand menus, Lee is continuously expanding the range of offerings. Perhaps the various products he made are now able to ensure we have the joy of eating as well as the joy of seeing. I am looking forward to seeing the new products that CJ CGV and Lee will introduce in the future!

Next
We are theater service professionals! Greeter Yoo-rim Won and assistant Doo-il Yang of CGV Gangnam