- Providing education on the amended Road Traffic Act, do’s and don’ts for drivers, and a vehicle parade was performed to raise the awareness of safety

- Parcel delivery which has become an essential service in our lives, helping establish traffic order and preventing accidents 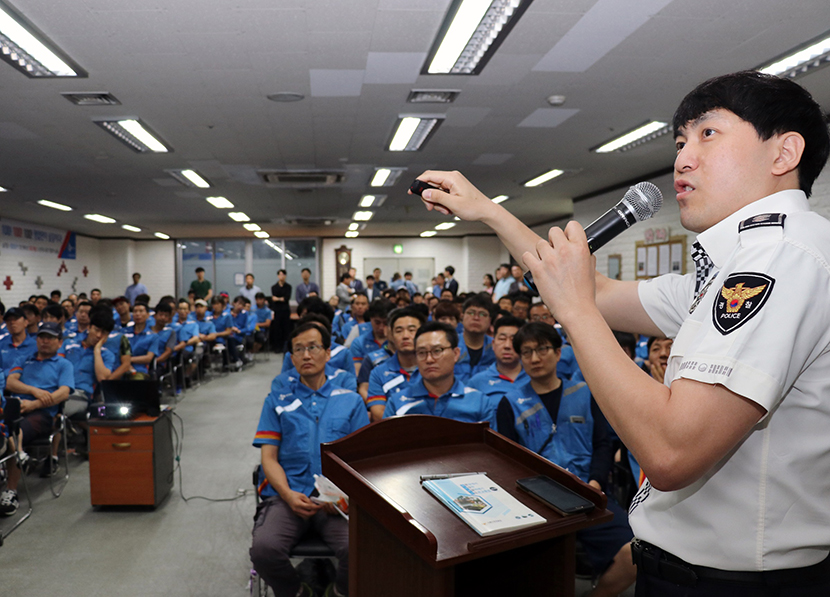 # Last April, Byeong-seop Kim, who was delivering parcels in Unyang-dong, Gimpo, Gyeonggi-do, witnessed a big accident in the underground parking lot of an apartment complex. In this allegedly sudden acceleration accident, the driver was injured and three cars were severely damaged. Kim photographed the scene of the accident on behalf of the driver who was at a loss about what to do, and contacted the owners of the damaged cars and the insurance company. As a result, the accident was handled very quickly.

As various traffic accidents due to sudden acceleration and jaywalking are occurring frequently these days, citizens’ interest in traffic safety is increasing. So CJ Logistics, the largest logistics company in Korea, is working hard to prevent safety accidents through cooperation with more than 17,000 couriers.

CJ Logistics (CEO Park Geun-tae) announced that the company held the ‘Safe Traffic Culture’ campaign at the parcel delivery terminal of CJ Logistics in Gasan-dong, Seoul on June 18, together with the Seoul Metropolitan Police Agency. 130 or so CJ Logistics delivery staff, who are delivering parcels in Guro-gu and Gwanak-gu, Seoul, received education on the amended Road Traffic Act, confusing traffic regulations and do’s and don’ts for drivers.

Prior to this, CJ Logistics entered into an ’MOU for Private-Police Cooperation in Community Public Order and Security’ with the Seoul Metropolitan Police Agency on April 19. The main points of the MOU are sharing crime-prone factors; creating an environment for crime prevention; providing information on missing persons; reporting traffic violations and crime-prone areas; participation in the pedestrian safety campaign.

As e-commerce is invigorated and the number of one-person households is on the rise, parcel delivery has become an essential service in our daily lives. Now consumer demand for safe parcel delivery service is also increasing. CJ Logistics is expecting that this campaign will contribute to raising deliverymen’s awareness of traffic safety and creating and propagating safety culture.

In particular, the company said that deliverymen would pay closer attention to safe driving, and like the ‘righteous person who accidentally caused an accident to prevent a bigger accident,’ who recently became the talk of the town, the company said that deliverymen would play a more active role when accidents happen around them. As deliverymen repeatedly deliver parcels along the same routes every day, they can spot anomalies, such as cracks in the road, vandalized public properties and sudden fatal accidents more quickly than others. If they participate in the crime prevention and traffic safety campaign, the public order and security of the community can be further improved.

“Based on various cases, I could easily understand traffic accidents likely to occur around me and the process of handling such accidents,” said Seong-ho Lee, of Gwanak Samsung collection and delivery station of CJ Logistics, who participated in the campaign. “I will be sure to comply with traffic laws more thoroughly, and I will be glad to help out when accidents happen around me.”

After the training on traffic safety, a vehicle parade for enhancing the awareness of safe driving was held, attracting public attention. Delivery vehicles with placards stating ‘If you slow down, you will see people’ and ‘Safe Traffic, Podori Safe Parcel Delivery Service’ and police cars formed a long procession, and they were driven around the terminal to help citizens, including drivers and pedestrians in the vicinity, raise their awareness of traffic safety.

CJ Logistics is planning to expand the campaign to all parcel delivery terminals around the country to raise all citizens’ awareness of traffic safety and help safety culture take root.

“We will take the lead in promoting a safe traffic culture through continuous private-public collaboration,” said a CJ Logistics official. “Based on the Sharing philosophy of CJ Group, we will fulfill our social responsibilities and play our role regarding win-win and pro-bono activities like the safety of residents and crime prevention.”

Meanwhile, CJ Logistics and the Seoul Metropolitan Police Agency are issuing letters of appreciation and the Podori mark to those deliverymen who directly contributed to crime prevention, arrest of criminals and establishment of traffic order. It is called ‘Safe Parcel Delivery Service’ certification. Last April, Jae-hwang Lee, who was wise enough to stop a baby stroller, which was rolling down the road at the intersection in Dapsimni, Dongdaemun-gu, with his delivery truck, and saved the baby in the stroller, earning him the ‘first Podori Safe Parcel Delivery Service certification.’ The company is planning to find such righteous people more actively and reward them, and develop programs that can boost their self-esteem.