“Brazil is becoming increasingly vital in terms of business because of its powerful competitiveness of its agricultural sector and its agricultural resources, and an important hub nation in the global strategies of CJ CheilJedang in various aspects, including a high population growth rate and a large domestic market …”

- Excerpt from the congratulatory address of Kim Chul-Ha, CEO of CJ CheilJedang at the CJ Selecta Opening Ceremony -

- CJ CheilJedang enters into the final agreement with Brazil Selecta.

CJ CheilJedang, which announced last June that it would acquire ‘Selecta,’ the world’s leading producer of soy protein concentrate (SPC), a vegetable high protein ingredient, entered into the detailed agreement to finalize the acquisition, and launched a new subsidiary called ‘CJ Selecta.’

CJ CheilJedang held the opening ceremony on August 25 (local time) in the K-Hotel Convention Hall in Goiania, Brazil. In attendance where more than 300 people, including key executives like Kim Chul-Ha, CEO of CJ CheilJedang, and Kim Jin-Hyeon, head of the material business division, key figures in the Brazilian government, local planters and officials from the Korean embassy. 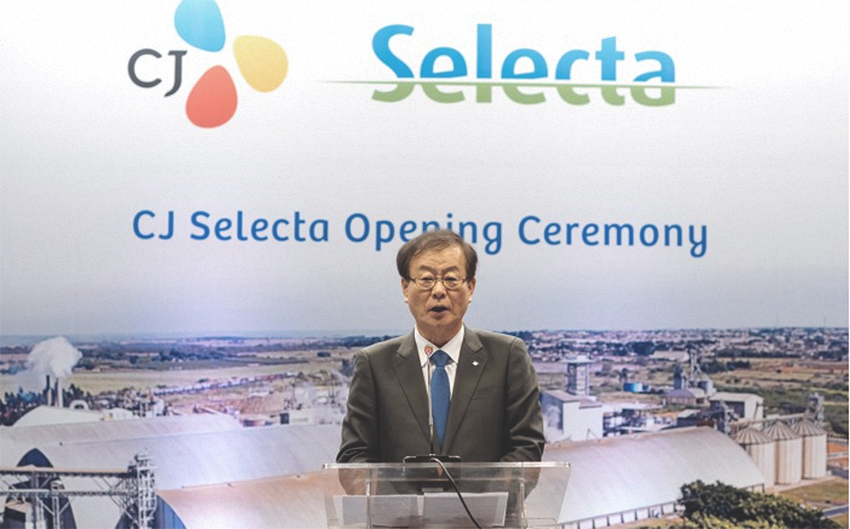 Selecta, which recorded KRW 400 billion in sales and KRW 55 billion in operating profit last year, is a promising company that has global sales networks throughout 40 countries, and possesses outstanding logistics competitiveness as it is located in the main production area for soybean, the main ingredient. CJ CheilJedang is planning to use the acquisition of Selecta to create a synergy effect in the soybean protein concentrate business and drive future growth.

“To transform Brazil into the hub of our South American business, we completed the BIO Piracicaba plant, and became a business partner with Selecta and subsequently founded CJ Selecta,” said Kim Chul-Ha, CEO of CJ CheilJedang. “Not opting to settle for the status quo as the leading comprehensive food company in Korea, we will become the ‘World’s Best Food & Bio Company’ by reinforcing our global business, which is our future growth engine.” Marcos Coelho De Carvalho, mayor of Araguari, who attended the ceremony, said, “The launch of CJ Selecta will greatly contribute to the economic development of Korea and Brazil, not just the development of the two companies.”

This acquisition enabled the company to build the business structure for producing not only ‘fermented soybean meal’, which is made by fermenting soybean by-products, but also ‘soybean protein concentrate,’ which is made by concentrating only the protein of the soybean meal. As a result, these two products have become representative vegetable high protein feedstuffs. CJ Selecta is now able to produce products for all types of livestock, e.g. ‘pig farming,’ ‘fish farming’ and ‘poultry farming.’

In addition, CJ CheilJedang is planning to produce soybean protein concentrate (SPC) for food and lecithin, a high-value-added additive, as well as SPC for feed based on Selecta’s non-GMO soybean purchasing capabilities, and it is expected to become competitive enough to create synergy with its existing businesses, e.g. biological resources, bio and food, based on its differentiated fermented enzyme technology.

As the consumption of farmed fish has exceeded that of natural fish, and the feed market for farmed fish and piglets using fish meal, but the supply of fish meal is limited due to catch limits and environmental issues (El Nino), the industry believes that the necessity of vegetable high protein materials is continuously increasing, and Selecta possesses unlimited potential value.

The global vegetable high protein-based feedstuff market is worth KRW 1.6 trillion, and has been continuously increasing by 7% a year on average over the past 5 years. CJ CheilJedang will diversify its business portfolio by combining its cutting-edge solid-state fermentation and protease treatment of protein, and become the undisputed leading company by generating more than KRW 800 billion in sales in four countries, i.e. Korea, Vietnam and China by 2020, and increasing its share of the SPC market to 40%.