CJ CGV prepared a special cultural space in Yogyakarta to support the development of the Indonesian film industry and invigorate the local film community.

- A place of cultural communication and relaxation for Indonesian movie buffs The community center consists of a cinema library, a lounge and a seminar room where movie lovers can gain inspiration and relax. As screens, projectors and sound systems are installed in each space, various film classes and programs can be carried out. The cinema library has a total of 300 books, e.g. literary and art books which were turned into movies, and movie books that will help people learn about film theories in depth. In the lounge and seminar room, CJ CGV is planning to introduce various programs, such as Movie Talk and film criticism so that visitors can talk about movies in depth.

Aside from this, at the ‘Art House,’ a movie theater with more than 140 seats exclusively for independent art films, visitors can watch various local movies and the movies which were entered in Indonesia’s iconic film festival ‘JAFF.’ 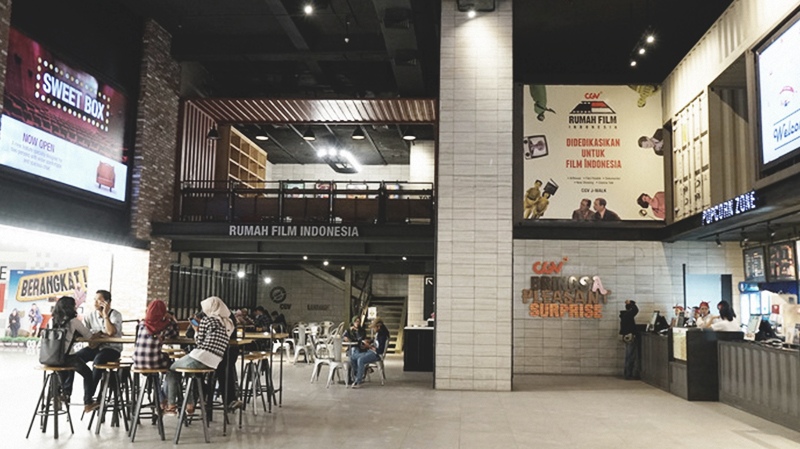 In addition to the community center operations, CJ CGV is carrying out a new project to uncover Indonesian youths dreaming of becoming filmmakers and support their film productions. For starters, the company will recruit project participants via its official social media sites and emails of CGV Indonesia until August 28 (local time), and select a total of 10 teams as project participants through the screening process.

5 teams will be selected through online voting. They will be given an opportunity to pitch in front of film directors, production directors and scenario writers who are experts in the field and participating as project mentors. The final 3 teams, selected by the mentors, will receive an opportunity to participate in a film camp run by CGV Indonesia and the funding necessary for making movies. The best movie, selected after the final screening, will have an opportunity to be entered in ‘JAFF,’ the Indonesian film festival, scheduled to be held in December 2017. “I hope that the first community center in Yogyakarta, Indonesia will establish itself as a cultural space where local film fanatics can gain inspiration and relax, and communicate with each other through the medium of film,” said Kim Gyeong-Tae, CEO of CJ CGV Indonesia. “CJ CGV will continue to conduct cultural and social contribution activities based on the welfare of the local community by organically cooperating with the Indonesian government, filmdom, schools and communities for the development of the Indonesian film industry.”

Meanwhile, CJ CGV entered into an MOU with Korea International Cooperation Agency (KOICA), and invested a total of $700,000 from August 2014 till the end of 2016, and carried out the movie and creative education project for youths in Jakarta and Bandung, Indonesia. As a result, the company carried out comprehensive programs, such as providing filmmaking education for teenagers, hosting a youth film festival, developing film education curriculum, fostering movie and creative education instructors, and donating filming equipment, and thus contributed to enhancing Indonesia’s filmmaking competency.