CJ’s medicine for gastroesophageal reflux disease has completed phase 3 clinical trials and will be reviewed for approval in September; expected to be a blockbuster with annual sales of 100 billion won 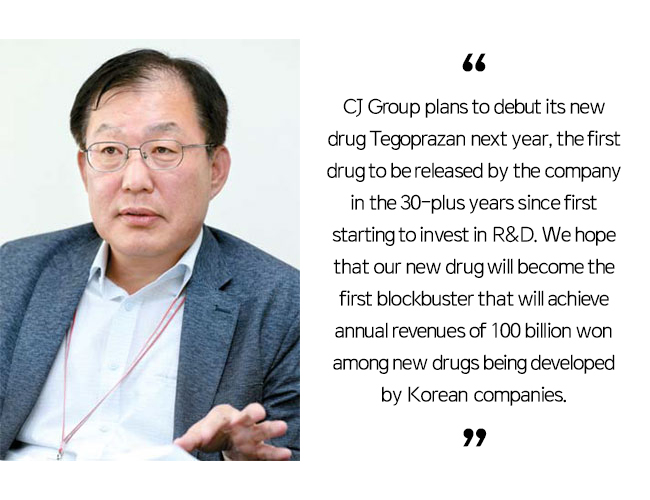 Kim Byeong-Moon, vice president of CJ Healthcare R&D, said, "We have built a foundation for new drug development after several decades’ tangible and intangible investment of products. The first fruit of all that effort is a medicine for gastroesophageal reflux disease called Tegoprazan, and we also plan to release second and third new drugs in the future." CJ Healthcare completed phase 3 clinical trials for its new drug Tegoprazan this spring and plans to apply for approval of the drug from the Ministry of Food and Drug Safety in September.

Tegoprazan is significant in that it is the first new drug to be released by CJ Group in the 33 years since the company embarked on its pharmaceutical business. In 2003, CJ CheilJedang succeeded in developing a pseudomonas aeruginosa vaccine known as Pseudo Vaccine and subsequently obtained MFDS approval for it, making it the seventh new drug to have been approved in South Korea. However, the vaccine was not officially released due to its low marketability. Korea’s domestic gastroesophageal reflux drug market is worth 350 billion won and is currently dominated by PPI (Proton Pump inhibitors).

Taken regardless of meal times and able to inhibit gastric acid secretion at night, Tegoprazan is attracting attention as a next-generation treatment that is capable of overcoming the shortcomings of PPI type drugs. Vice president Kim said, "Last year, Takeda Japan launched a new drug called “Takecab', which has the same mechanism as Tegoprazan, and it recorded annual sales of more than 500 billion won in a year, and its annual sales are expected to increase to 1 trillion won in the future. Tegoprazan is the second P-CAB (Potassium Competitive Acid Blocker) to be developed in the world following Takecab and boasts even more excellent properties (e.g. efficacy)."

He also added, "We are continuously adding indications via clinical trials. After attaining success in the Korean market, we plan to expand into China and Southeast Asia, where the prevalence of digestive system diseases is on the rise." 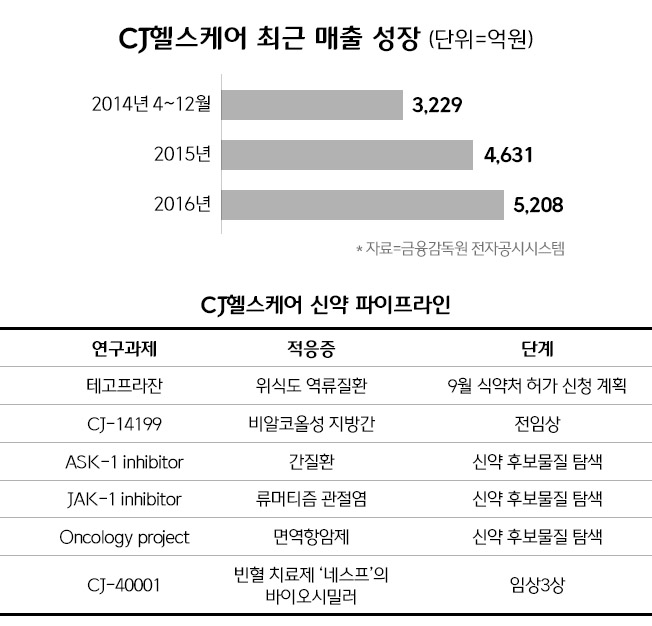 In 2005, CJ Healthcare signed a technology export agreement with Chinese pharmaceutical company Luo Shin estimated to be worth as much as 100 billion won. China’s gastroesophageal reflux market is valued at 3 trillion won, and CJ Healthcare is bound to receive royalties of approximately 10% of the sales of products released from 2020 onwards.

CJ Healthcare recently reformed its R&D organization to accelerate the launch of its second drug following Tegoprazan. Vice president Kim said, "Our company is relatively small compared to multinational pharmaceutical companies in terms of fund investment and research manpower. Therefore, the only way for us to gain a competitive edge is to speed up the development of new drugs. To that end, we integrated the previously separate research, clinical trials and project development organizations into one.” The aim of the reorganization is to promote communication and collaboration between team members so that we can discover candidate materials for new drugs and conduct initial clinical trials of them at a speedy rate.”

Vice president Kim said, "Our system allows us to rapidly proceed to initial clinical trials, assess whether the new drug development project can succeed, and then invest in the project in a large scale if it has been deemed viable or, if not, quickly abandon it altogether. We shall differentiate ourselves from large global pharmaceutical companies whose sheer size and convoluted decision-making process render them unable to operate with sufficient speed.”

Recently, CJ Healthcare has also been accelerating the acquisition of R&D capabilities through open innovation. "We are negotiating with two to three technologically equipped venture companies to introduce candidate materials for new drugs into the company," vice president Kim stated. "We will continue to monitor early-stage research of new drugs being developed at the global level."

Next
DIA Festival Offers Fun from Beauty Care to Food