CJ CGV is creating a virtuous circle where it takes the initiative in making local movies become popular and thereby induces production. CJ CGV is deemed to be significantly contributing to the overall growth of Vietnamese film industry. CGV Vietnam announced on 6th that a Vietnamese local movie , distributed by CGV Vietnam, attained a new box office record on June. Released in late April, this movie recorded as much as 7.5 million dollars as of the end of June. This record was higher than the other existing blockbusters of the moment:

- Building a system for close cooperation with production and feedback.

CJ CGV entered the Vietnamese film market in 2011 by acquiring a local movie theater company called Mega Star, and in 2014, it began to expand its presence in the market by changing the brand to CGV. In this process, CJ CGV has continuously expanded the distribution and showing of Vietnamese commercial and art films under the motto of "Diversify Movie Contents." As a result, the share of local films rose from 19% in early 2014 to 32% in late 2015.

Local filmmakers, who saw the potential of local films, joined this movement, producing more local films. But in 2016, despite the increase in the number of releases, the share dropped to 25% due to poor quality.

▲ The poster of , a movie distributed by CGV Vietnam

To change this atmosphere, CGV Vietnam launched a new approach. It signed a strategic distribution contract with Chanh Phuong, the largest local film production, for to support the local film market. Rather than simply distributing movies, CJ CGV built a system for close collaboration with the production and facilitating feedback across production, marketing and release from the film planning stage.

In this process, CJ CGV suggested the studio to produce comedy movies that could capture the taste of Vietnamese people and also helped the studio to attract funding. In particular, CJ CGV continuously provided the know-how it has accumulated in the Korean film market, contributing to the creation of movies that can reach the heart of viewers.

Nghiem Pham, president of Chanh Phuong says, " was produced with new actors and a director who had never made a comedy before, and also had difficulties in attracting investors. But CGV recognized the potential of the work and continuously provided advice and cooperation from the stage of production, and so we were able to produce this beloved movie." 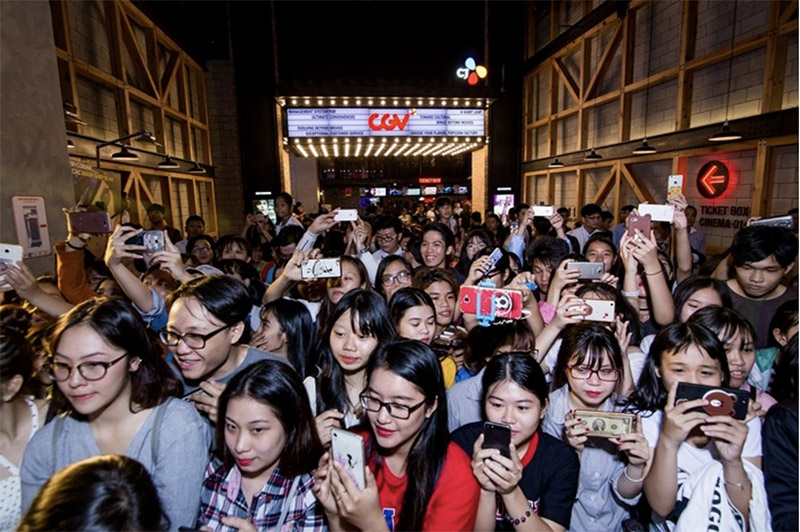 ▲ The fan meeting of

Kwak Dong-Won, an executive from CGV Vietnam, who oversees the company's business in the country said, "When we entered the Vietnamese market, our mission was to diversify movie contents and foster the local film industry. These efforts we made began to pay off through close cooperation with local players and we definitely feel rewarded."

Meanwhile, is a romantic comedy where a 38-year-old yoga teacher falls in love with a woman but has to overcome an age difference of over 20 years. Nguyen Binh Kaity, a famous Vietnamese YouTuber, who played the heroine of the film, made a successful debut as an actress with her natural acting ability.