Six years of effort from CJ E&M, the famed comprehensive contents company, finally bore fruit via KCON 2017 NY which was held on June 23 and 24 in New York, a city known to be at the heart of the world’s economy and culture.

Of particular note, this year's KCON 2017 NY was sponsored by Toyota for the fourth consecutive year, followed by global IT companies, leading telecommunication service carriers and insurers such as Amazon, AT&T, and State Farm, helping exude the esteem and prestige of the Korean Wave and KCON itself, both of which have established themselves as a part of the fabric of mainstream pop cultures in the US. CJ E&M has been spearheading the spread of 'K-Lifestyle' by holding KCON, the world's largest comprehensive Korean Wave festival in North America, Latin America, the Middle East, Europe, and Asia, for fourteen times over six years. Among them, the US is the core base of KCON as KCON in the US drew about 64% (309,000 people) of KCON’s 460,000 cumulative audience total.

The event, held at the Prudential Center in New York, with the slogan of “LET'S KCON,” attracted a total of 43,000 spectators, including 120 artists and those from 100 companies and institutions for two days, proving the sustainable popularity of the Korean Wave which has become a part of mainstream culture.

Moreover, the organizers focused on the spread of K-Lifestyle by preparing convention programs which doubled from the previous year and launching or upgrading active programs such as the Dance Workshop in order to let local audiences experience more Korean Wave contents. Dance Workshop gave audiences aged between 15 and 24 opportunities to learn K-Pop dances. Toyota has been a sponsor of KCON for four consecutive years since KCON LA in 2014, proving KCON's status as a global marketing platform in the United States. In particular, Amazon, the world's largest IT company, AT&T, the largest US carrier and State Farm, a leading insurer, participated in KCON as sponsors for the first time, attracting attention from local audiences and media.

Amazon's subsidiary, Amazon Coins, will host the Mobile Masters Invitational, an e-Sports contest at KCON 2017 NY, for two days, globally broadcasting the event via Twitch, the largest game streaming platform of the US. Those who bought the tickets for KCON 2017 NY Convention will be able to enjoy KCON and attend the venue to take in live games. Two weeks after the end of KCON, CBS Sports will air Mobile Masters Invitational as a regular program.

"We have decided to host the game tournament in connection with KCON 2017 NY by taking into consideration the fact that the KCON venue maximizes the image of Korea, known for being a game and IT powerhouse, and that the majority of visitors to KCON are 15- to 24-year-old who are adept with using digital devices and playing games,” Amazon said.

It is said that global companies began to sponsor KCON 2017 NY as KCON was recognized as a representative platform for the Korean Wave where not only Korean Wave fans attended but also the 'millennial generation' (the generation born between the early 1980s and the early 2000s), a major consumer group in the US, came in droves. In the early period of KCON, Korean companies, such as Nongshim and Asiana, took part in the event as major sponsors. Over time, increasingly more local American companies and global corporations have joined the sponsorship for the event. In fact, 80% of those who visited KCON last year were 15- to 24-years old.

CJ E&M said, "Since 2012, we made endeavors to provide Korean and foreign companies with new growth engines with a focus on the Korean Wave in the US and to spread Korean lifestyles represented by K-Culture, such as K-Pop and K-Food among locals in the US. Such efforts are now paying off.”

KCON 2017 NY held on June 23 (Fri) - 24 (Sat) featured conventions about various K-Contents in the daytime and put on performances by a total of nine groups such as TWICE, GFRIEND, HIGHLIGHT, Zion.T in the evening. 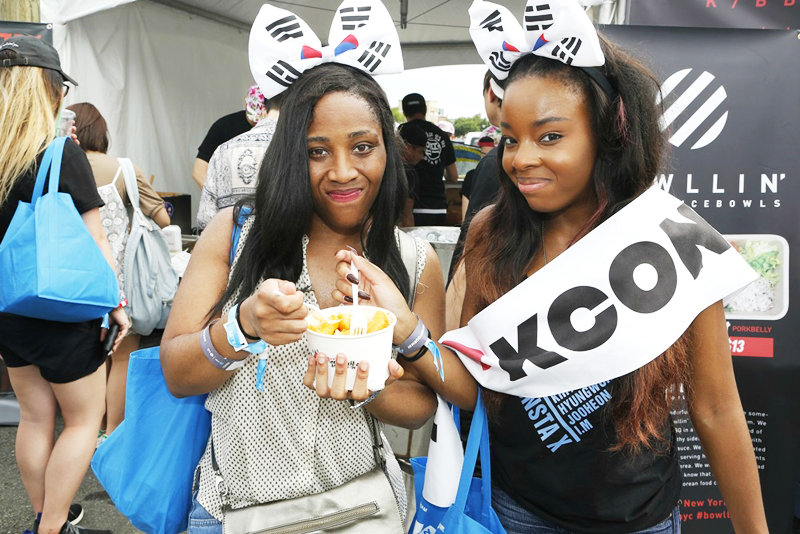 ▲With the addition of K-Food Pavilion and Beauty Block, the size of KCON doubled from the previous year and provided a broader K-Lifestyle experience.

The performance and booth content in the convention held from 10 am to 6 pm on both days included Making Bingsoo (Korean sherbet), K-Pop Fashion Talk Show, ‘Who’s the Cutest’ Contest with Audiences, Discussion about Upcoming K-Drama Stars, Makeup Lectures by Popular Korean and American YouTube Creators, Beauty Care Class for Men, Debate about Differences between Korean and Foreign Culture and How to Study in Korea among others. "We are stepping our efforts to promote Korea as a tourist attraction among US tourists to diversify foreign tourists to Korea which are lopsided toward tourists from China and Japan," said Min Min-Hong, director of the International Tourism Strategy Office at the Korea Tourism Organization. "We hope that by publicizing activities for Korea tourism and the 2018 PyeongChang Winter Olympics in connection with KCON 2017 NY will create a boom in visits to Korea by American tourists.” A fever of the "M Countdown" Concert gripped visitors in the evening. On June 23, ‘GFRIEND', 'HIGHLIGHT', 'KNK', 'SF9', 'Zion.T' took the stage to excite all in attendance. The following day, uplifting performances were given by 'CNBLUE', 'NCT127', 'TWICE', and 'UP10TION. Fans who packed the 10,000-seat performance hall during the two days thoroughly enjoyed the festival while singing along with the artists in Korean, standing up from their seats and dancing together. 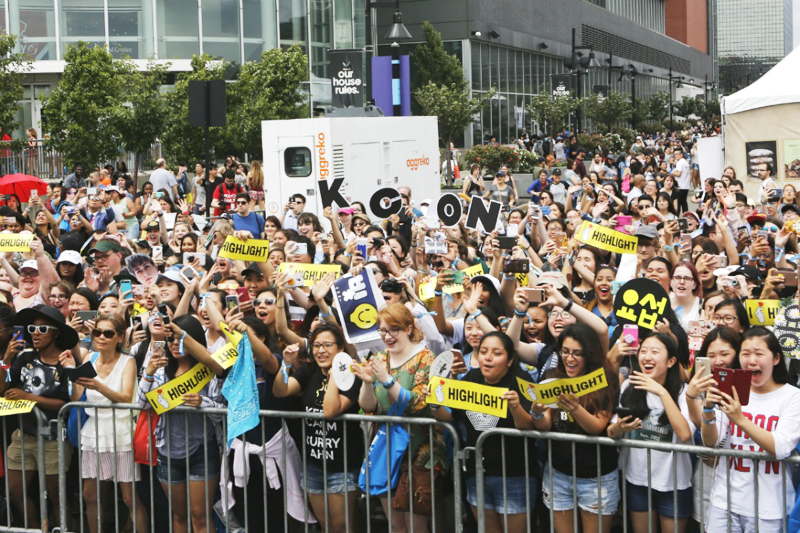 "K-Culture, as represented by the Korean Wave, has established itself as a mainstream form of pop culture and significantly expanded its influence in the United States such as through the steady expansion of KCON and global corporations’ participation in KCON. This can be credited to CJ E&M which has spread the Korean Wave while holding KCON in LA and New York in the United States since 2012," said Shin Hyung-Kwan, head of the Music Contents Division at CJ E&M. “CJ E&M will take the lead in bringing K-Lifestyle to the world's mainstream culture and enjoying it together with people around the world by continuing to hold KCON where people can experience a variety of K-Lifestyles."

In addition, CJ E&M will hold KCON in LA for three days from August 18 to 20 as the company begins to develop new markets for KCON on full scale this year by tapping into new regions. CJ E&M is poised to play a key role in making K-Lifestyle a part of mainstream global culture by developing the Korean Wave and evolving it into a new growth engine and a business model through global industrialization and pioneering new markets for the Korean Wave.