The CJ Group and the Korea International Cooperation Agency (KOICA) have been carrying out CSV (Creating Shared Value) activities aimed at raising Vietnamese farmers’ income and self-sufficiency. These activities are now paying off handsomely. On June 23, CJ Group held a ceremony in honor of the completion of CJ-KOICA’s red pepper powder processing factory in Tamung 2 Village of Ninh Thuan Province in Vietnam. The plant which processes harvested pepper is equipped with facilities for washing, drying, milling, refrigeration and freezing, and can handle up to 500 tons of red pepper per year.

CJ CheilJedang plans to use red pepper powder produced here as an ingredient for exported “Gochujang” or Vietnamese Kimchi after undergoing a strict quality inspection. Through this, CJ CheilJedang will be able to stably supply ingredients of reliable quality, and Ninh Thuan farmers can earn higher income through contract farming. It is expected that if the factory begins to operate on a full scale, the factory is expected to contribute to local job creation. 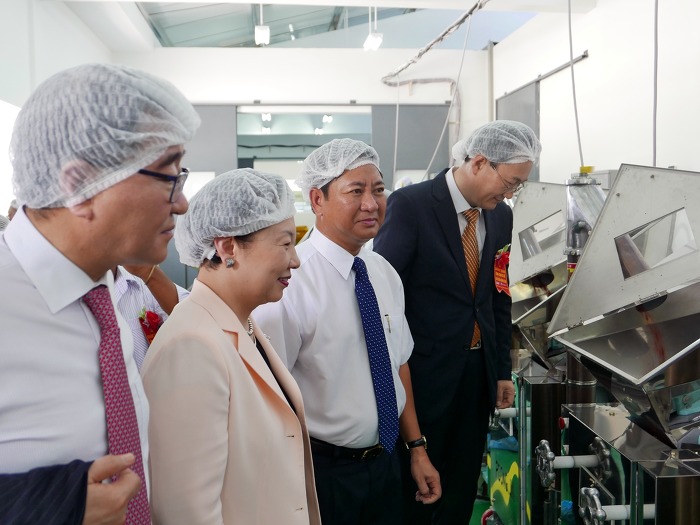 ▲ Inside the red pepper processing factory in Ninh Thuan, Vietnam

"We built a sustainable global CSV business model that will help Vietnam's farmers elevate their income and CJ increase its food business competitiveness beyond public development aid in the form of unilateral donation," said Min Hee-Kyung, director of corporate social responsibility promotion at CJ Group. “We will fulfill our social responsibilities as a member of local communities based on the philosophy of 'contributing to the growth of the national economy through business' which is the founding principle of the group.”

"We expect that the farmers’ income in the villages will increase steadily through the red pepper processing factory," said Tran Quoc Nam, vice governor of Ninh Thuan. "We have received unilateral benefits so far. So, it is very meaningful for CJ and villagers to build business partnerships."

The CJ Group has been involved in a rural development CSV project in Vietnam in concert with KOICA since 2014. Tamung 2 Village in Ninh Thuan Province, the target of the first project, was the most underdeveloped area, with one-third of all households earning less than US$35 per month. KOICA drafted a comprehensive village development plan and supported the establishment of local autonomous education and cooperatives. CJ became responsible for distributing Korean red pepper seeds and researching and spreading agricultural technology to cultivate them effectively.

CJ and the KOICA also took the lead in improving living infrastructure and the residential environment for local residents by remodeling school and town hall facilities and linking water pipes and building irrigation water works together with K-Water. Last year, CJ Group employees raised as much as 10 million won and donated 300 school uniforms and sneakers.

Thanks to such CSV activities, red pepper cultivation farming houses jumped from 2 in 2014 to 43 at the moment in Tamung 2 Village and its 245 households. Famers’ income rose fivefold on average during the same period.

These achievements earned the CJ Group the “Friendship Order” from the President of Vietnam in 2015.  Last year, the CJ Group was selected as one of seven innovative companies that will change the world as the only Asian company by Fortune, an American economic magazine.

Next
CGV opens the ‘Film Community Center’ in Indonesia